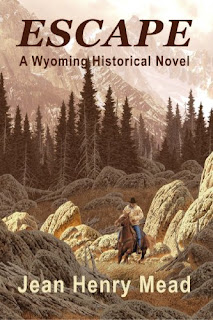 This novel might also have been called No Escape, for it tells the story of a young woman, Andy, taken hostage by some Hole in the Wall desperadoes on the run from the law. Her hair cut short and disguised in men’s clothes, she is mistaken for a boy by the gang. One of them discovers her identity, a boy named Billy, who is little older than she. He agrees to keep her secret and does his best to protect her.

Far from home, she is trapped among her captors and put to work as cook and domestic. Meanwhile, she develops an attachment to Billy. He’s a neophyte in the gang, with little criminal experience, and she wants to save him from the life of an outlaw. As the law is cracking down on rustlers and robbers with increasing ferocity, there seems little future in frontier crime anyway.

Characters. While Butch Cassidy figures only briefly in the story, Harry Longabaugh (the Sundance Kid) has a turn in a parallel plot involving a bank robbery in Belle Fourche, South Dakota. Longabaugh is not the congenial sort that Robert Redford made memorable in the movies. He’s a bit cranky and impatient. When the bank robbery is a fiasco, we find him to be little more than the above-average crook.

Other characters of interest include Harve Logan, who attends Longabaugh on the ill-fated robbery attempt. The two get captured and jailed, then escape together, only to cross paths with two low-lifes with nefarious plans to join the Wild Bunch. We also get to know Tom O’Day, the man who bungles the robbery, chiefly because of a bad drinking problem.

Jim McCloud is another man bound for the Hole in the Wall when we first meet him. Freshly escaped from prison, he’s jumping trains, shedding his prison clothes and worried that his prison-shorn hair will give him away. Also memorable—for his stutter—is Jim’s friend, Dick Hale.

Plot. Much of the novel involves a winter trek across Wyoming by Billy and Andy as they deliver a change of horses for the Belle Fourche bank robbers. Having left the horses at an agreed place, the two then set off into bad weather on a return journey that takes many days and finally leaves them lost, on foot, and freezing from cold.

Along the way they encounter one difficulty after another. Meanwhile, Andy is torn by her growing affection for Billy and his resistance to her pleas for him to leave the gang. For him, the gang is his only family, and Butch is like a big brother to him. Failing to persuade Billy, Andy wants only to get back home, but obstacles continue to prevent that from happening.

Wrapping up. Mead has marshaled a good deal of history about members of the Hole in the Wall gang. The book closes with an account of the fate of many of them. I’d recommend readers to jump to that section first, because it provides an informative context for the story she has to tell.

Historical accounts, which focus on incidents and dates, don’t reflect the actual day-to-day experience of the men and women who lived outside the law. Of the Hole in the Wall gang and Butch Cassidy’s Wild Bunch, the novel captures the long months in hiding and the lack of diversions besides playing cards. Food was unvaried and bad. Illness and gunshot wounds had to be doctored with home remedies.

Traveling for days at a time across rough and hostile terrain in the worst of weather was a tedious, often life-threatening trial. Holed up in a cabin with the same handful of men week after week was no less wearying. Mead’s novel removes the romance and excitement from what we imagine as the outlaw life, and leaves us with what’s left, and it’s not exactly all thrills. I won’t think of the Wild Bunch again without recalling Mead’s portrayal of them.

Escape is currently available at amazon and Barnes&Noble and for the kindle.

Jean Henry Mead is a writer of historical fiction and mysteries, as well as an award-winning photojournalist and writer of children’s books. She is a frequent interviewer of western writers at her blog, Writers of the West. You can find out more about her at her website.