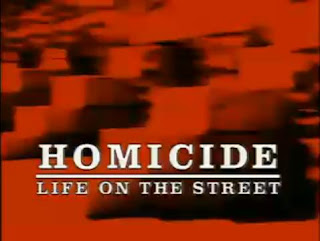 This much-acclaimed police drama ran for seven seasons on NBC in the 1990s. Rarely gaining a notable market share of network audiences and seldom ranking better than #60 in the Nielsen ratings, it continued to air anyway. Set in Baltimore, the entire series was filmed there, its goal to realistically show the daily work life of a department of homicide detectives.

A predecessor of HBO’s The Wire, it was the creation of Barry Levinson, David Simon, and a number of first-rate writers. The cast was nearly perfect, with Richard Belzer, Andre Braugher, Clark Johnson, and YaphEt Kotto in long-running roles. Other fine actors came and went, including three in the cast from the first season: Melissa Leo, Daniel Baldwin, and Ned Beatty.

For my money, the best guest performance was by Paul Giamatti, who played a murder suspect whose father had been attacked and killed by a pair of pit bulls. Giamatti seems callously indifferent to the man’s death, which makes him appear either cold-blooded or mentally deficient. The two detectives on the case are split in their opinion until they tell him his dogs will have to be euthanized. Giamatti’s despairing response not only answers the question, but rips your heart out.

Breaking conventions. The show broke so many conventions of police dramas that you never knew quite what to expect next. Unlike the neat weekly formula of the original Law and Order, the focus was not on finding and then pinning a crime on a perpetrator. While police procedures were part of the story, the show was not a procedural. Often, crimes went unsolved or suspects were allowed to go free for lack of evidence or a confession.

The primary focus was on the daily grind of police work itself and its particularly corrosive effect on homicide detectives. Included in that mix was the presence of political pressure from both internal and external sources and the degree of infighting among the detectives themselves, sometimes playful, usually less so. Domestic troubles were also a recurring theme. The solving of a crime often became a side issue.

Themes and threads. A constant theme was the trust that developed or failed to develop between detectives working as partners. There were ongoing disagreements that grew out of the racial politics of a city with a large African-American population. Later in the series, with three female detectives joining the department and a female medical examiner, there were gender issues as well as rocky romantic liaisons.

A thread that dominated two seasons involved the shooting of a drug kingpin and the following cover-up among three detectives. Making the arrest of an arrogantly lawless crime boss they’d been unable to pin a rap on, one of them kills him at a moment when he seems about to surrender. It all gets uncomfortably swept under the rug until the man’s sister declares her intention to take revenge. She claims to have surveillance tapes of the whole incident, which produces a war of nerves extending over several episodes.

The series also ventured into issues of sexuality as one detective admits that he is bi-curious and accepts a dinner date with a gay man. When this detail is inadvertently disclosed, the rumor mill triggers an outbreak of homophobia within the Police Department. The episodes touch on the cost paid by gay police officers who must stay closeted to keep their jobs.

Style. With the dominant use of handheld cameras, the show had a documentary feel. Documentary filmmaker Barbara Kopple even directed a couple of the episodes. Editing was rough and choppy, deliberately expressive in the use of jump cuts. There was also the trademark use of triple-shots in which we’d see the same moment of action three times in rapid succession. Watching crime shows today, like Homeland, you realize how ponderously slow they can be.

The series cleverly teamed up with Law and Order to produce four two-part stories, one part involving the New York detectives (Jerry Orbach and Benjamin Bratt) and the other the detectives in Baltimore. The show was still going strong in 1999 when it was finally cancelled, the writing and performances as fine as ever.


The actors. The performances are so uniformly good, it’s hard to pick a standout, but you’d probably have to give the nod to Andre Braugher as Detective Pembleton, who is nearly always compelling. His Julliard training produces scenes that are often at a pitch suited to the stage. His character’s stroke at the end of season five is Shakespearean. Clark Johnson, as loose and relaxed as Braugher is intense, would run a close second as Detective Lewis. I also liked Melissa Leo, who plays Detective Howard as a woman too tough to mess with.

As a sentimental favorite, I’d pick Yaphet Kotto as the Lieutenant in charge. In a fatherly role, he could be stern, worried, wise, impatient, ironic, or angry, or break into a gap-toothed smile that warmed you to the gills. In roles extending over one or two seasons, I especially liked Michelle Forbes and Austin Pendleton as Medical Examiners. Jon Seda and Toni Lewis were both strong as detectives who joined the force late in the series. Honorable mention goes to Max Perlich as a video cameraman hired for one season to cover crime scenes.

Wrapping up. Watching episodes back to back on DVD has the effect of intensifying the drama, deepening attachments to characters, and feeling immersed in the world they inhabit. An added advantage is not having to wait a week (or a summer) to learn what happens after the cliffhangers. The whole series is currently available at netflix. Many clips can be found at YouTube, like this one in which Detective Bayliss (Kyle Secor) and Detective Pembleton (Andre Braugher) discuss their jobs.


For more of Tuesday's Overlooked Movies and TV, click on over to Todd Mason's blog.