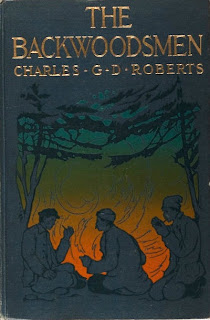 This collection of 15 stories comes from the hand of one of Canada’s most respected early poets. Charles G. D. Roberts (1860-1943), one of the very few early western writers to have been granted a knighthood, is remembered as the Father of Canadian Poetry. Along with several contemporaries, like Jack London and Beatrix Potter, he also became known as a writer of animal stories. The Backwoodsmen is devoted to this particular genre of storytelling.

It may be a stretch to regard the book as a western, but Roberts sets these stories in the backwoods and mountain wilderness of the Canadian West. The animals are both wild and domesticated. Some have lives that intersect with humans, and some don’t. In an earlier collection, Roberts said that his animal stories were intended to remind readers of their kinship with the rest of the natural world. It’s a theme that crops up often in the early western.

In tone, the stories in The Backwoodsmen range between cold Darwinian survivalism and greeting-card sentimentality. The opening story, “The Vagrants of the Barren,” describes how a man survives in a blizzard by cutting the throat and drinking the blood of a caribou that has foundered in the snow. It’s followed by the sweetly congenial “MacPhairrson’s Happy Family.” In this story, the men at a sawmill look after a menagerie of domesticated animals who are left without supervision when their elderly keeper is sent to the hospital after a fall.

Themes. Many of the stories feature a girl, often very young, who is imperiled by a life-threatening turn of events. In “On Big Lonely,” four-year-old Mandy Ann and a pet woodchuck find themselves adrift on a boat in a river that empties into a lake. In a storm that blows up, their boat happens to be observed by a pair of loggers who are canoeing in the opposite direction.

Suspense builds as one of the men, described as always soft on animals, spies the woodchuck and persuades his reluctant companion to retrieve the boat. Drawing aside it, they discover there’s another passenger aboard, Mandy Ann. She is, of course, the daughter of one of the loggers.

The theme of survival figures in “The Grip in Deep Hole,” where Roberts tells of a man who falls into a river. His foot becomes lodged between submerged tree branches, and only his face is above water. When a dying salmon floats near him, a bear crosses the river to retrieve it. Grabbing the fur of the surprised bear, the man is pulled free. In both of these stories, the survival of the lone character depends on an animal that saves him.

In “The Battle in the Mist,” two canoeists on a narrow river observe a life-and-death struggle between a mink and raccoon for possession of an egg on the riverbank. Roberts describes the fight graphically, the raccoon finally killing the mink. Having characterized the mink as malevolent, he draws the reader’s sympathy to the raccoon, but the two human observers have no favorites and are fascinated by the bloody fight itself.

Touching on a larger theme that crops up in “The Vagrants of the Barren,” Roberts faults humans for believing themselves to be masters of the wild. The man about to become lost in the snow is described as driven by “indomitable man-spirit.” When the storm blows up, he is determined to defy it, cursing the elements, with “obstinate pride” in his superiority to the animals of the wild. But his life-saving encounter with the caribou humbles him before story’s end.


Comedy. While there is nothing amusing about sucking the blood from a caribou’s cut throat, many of the stories by contrast have a comic element. There’s farce in “From Buck to Bear and Back,” where a backwoods farmer tries to shoot a buck deer that has been eating his prize cabbages. Both are observed by a bear, which pursues the farmer up a tree.

There’s a comic figure in two stories about 50-year-old Mrs. Gammit, who has a cabin in the woods across the ridge from another settler, Joe Barron. She comes to him for help with wild animals who are giving her troubles.

Borrowing a muzzle-loader in “Mrs. Gammit’s Pig,” she attempts to scare off a bear that has escaped from a circus and has been trifling with her pig. A poor aim with the gun, she misses the bear and kills one of her turkeys instead. The bear runs off, but on his next visit, she throws hot water on him, which is enough to discourage further returns.

Character. Where there are men in the stories, they are often cast as rescuers or, as in the case of Joe Barron, an advisor, whose advice is never taken. Women are typically vulnerable, unless they have grown old and acquired a crusty attitude about the world. Whether for comic or melodramatic effect, the admirable characters are marked with a kind of frontier fearlessness.

In “Melindy and the Lynxes,” a tentative young woman shows her spunk when a pair of lynxes attacks her small herd of sheep. With the encouragement of her aging, rheumatic grandmother, she goes after them with an axe but without much success. The old woman then kills one with a shotgun and the other runs off.

Wrapping up. Born in New Brunswick, Roberts was educated in Canada and began publishing poetry in 1878. His work received critical recognition in the 1880s, and his first novel, The Forge in the Forest, was published in 1896. After sojourns in New York, Paris and Munich, he lived in London, where he served in the British Army during WWI. He settled again in Canada in 1925.

During his life, he produced a vast outpouring of poems and fiction, including nine novels and five novellas. FictionMags Index lists 144 titles in publications ranging from Everybody’s Magazine to Harper’s Monthly.

The Backwoodsmen is currently available online at Internet Archive and Project Gutenberg and for kindle and the nook. For more of Friday's Forgotten Books, click over to Patti Abbot's blog.