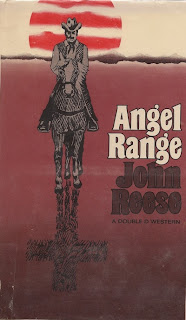 This novel was first published in 1971 as volume one of a western trilogy called Jesus on Horseback. By then, John Reese (1910-1981) had been pouring out stories for 30 years in the magazines. At the age of sixty, he was now publishing the first of many novels.

Reese, as I’ve noted here before, brings a number of quirky gifts to western storytelling. He seems to enjoy scrambling the elements of the traditional western, mixing in a good deal of wry humor, while keeping his characters grounded in a realistically described world.

Plot. In this novel, a cowhand, Rolf Ledger, has just been released from prison and is looking for a job at a ranch in northeast Colorado. A sheriff arrests him, though it’s clear he isn’t the man his posse is looking for. Seems Ledger served as a chaplain’s assistant in prison, and the folks of Mooney County are in immediate need of a cleric to officiate at a funeral.

Never ordained and never even called, as he continues to remind the sheriff and anyone who’ll listen, he reluctantly agrees to help out. The burial candidate was not only a prominent citizen but the victim of a killing. Nearly everyone in the vicinity shows up for the funeral, including a madam and some girls from a local whorehouse.

All but an upright Methodist, who objects to the whores, are comforted by Ledger’s sermon. Given the local shortage of men of the cloth, he is pressed to stay on. Then when some amateur doctoring saves the life of a resident, he gets an unwelcome reputation as a faith healer—maybe even an angel. Northeast Colorado ain’t no “angel range,” he insists, but you can’t stop rumor.

He moves in with an unmarried rancher outside of town who has an obsession with stringing barbwire fences. By degrees he becomes involved in the affairs of another rancher whose cattle keep disappearing thanks to persistent thieves. And he finds himself instrumental in the hurried marriage of the sheriff's deputy and the rancher’s daughter, who discovers she’s going to be a mother. In an amused detail, Ledger is embarrassed by use of the word “pregnant.”

Meanwhile, the rancher’s other daughter wants to know if Ledger believes in evolution. She knows her Darwin and won’t hear any creationist hogwash about the origin of species. For his part, Ledger isn’t even sure he believes in God. They are an unlikely pair, but they’re destined to be drawn together in this backwater neck of the prairie.

A train wreck and the surprising deaths of two crewmembers uncover more nasty work of the thieves. Ledger uses his own connections as a former outlaw to solve the mystery and bring them to justice. Then, in the rough ecumenical spirit that pervades the novel, Ledger gives last rights to an elderly priest who is shot as a lynch mob attempts to break into the jailhouse to carry off a prisoner.


Character. Rolf Ledger makes enjoyable company throughout this novel. He has no aspirations beyond getting a job as a cowhand, and until he finds one, his life is on hold. Thoroughly uncanonical, he practices a religion of common sense. Boiled down to its basics, it can be summed up in the words, why can’t we just get along?

Though the laugh-out-loud moments in the novel are few, it’s still a comic world where people have to muddle on because they aren’t all that bright. Most people have to learn everything the hard way. For someone like Ledger, you try to navigate around them, always looking for the path of least resistance.

Storytelling style. The novel’s story is narrated in an ungrammatical, colloquial style, as if it was being spoken. It recalls the homespun yarn spinning of Alfred Henry Lewis’ Wolfville.

Rolf had rode all the way up from Denver, and was still boiling. What happened, he hired out to a saloon to help build on a room, a dollar and a half a day and a place to sleep, only this fella he was working for, some way he figgered out that Rolf was an ex-convict. So after five days, he throwed him five two-bit pieces and told him to get out of Denver or he’d have him throwed in jail, and he could do it too.

Long after you forget there’s a person somewhere speaking these words, the narration slips into first person, and you discover the narrator is actually someone in the novel. He just doesn’t appear as such until nearly the end.

There’s a casual and unsentimental regard for prostitution and a saltiness in the dialogue that disqualify the novel as family friendly. The sheriff, in one instance, gets to ranting about the general lack of intelligence among humans. Using evidence from the Bible as an example, he marvels at the obvious nonsense of circumcision.

The concrete details of daily life also show Reese as thoroughly familiar with it. When a character brings in “cobs” for a stove, you realize it’s a detail rarely found in other westerns. It would take someone who’d lived on the tree-scarce plains, as Reese did in Nebraska, to know that corncobs were the fuel of choice for the farmhouse kitchen.

Wrapping up. There’s a western quality to Reese’s brand of storytelling that harks back to Twain. It’s an unvarnished and unromanticized view of human nature that belies an intelligence in the storyteller that is never revealed in so many words. You have to read closely for hints of it, and it typically shows up in ironies and the unexpected.

Reading about Reese’s Mooney County, you know you’d never want to live there. His West is not a lost Eden where people lived by the Code or much of any code besides looking out for their own interests. It’s also not a place for anything but ordinary heroics, which is doing what you have to do because doing nothing is to invite disorder and chaos.

There’s also a libertarian spirit lurking on the margins of a Reese story that one seldom finds elsewhere in westerns. Out here on the frontier, Methodists may outnumber atheists, socialists, and anarchists, but they don’t have the range to themselves. There is an undercurrent of rebellion that roams free and is unintimidated by mainstream political parties and religion.

Reese is a refreshing and entertaining storyteller. When he began publishing novels in 1971, he had already turned out hundreds of western stories, writing as John Reese for the slick magazines and as John Jo Carpenter in the pulps. His storytelling style was by then finely honed. The following volumes of the trilogy, The Blowholers and The Land Baron, will be reviewed here presently.

Angel Range is currently available at amazon and Barnes&Noble and at AbeBooks.