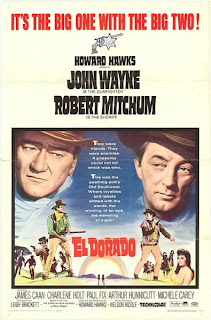 This Howard Hawks western bears a strong resemblance to his previous western, Rio Bravo (1959). The elements are much the same, as if Hawks wanted to have another go at them. John Wayne appears again, this time as a hired gun. Particular about who hires him, he turns down a dirty job in the opening scenes offered by a land-greedy rancher (Ed Asner). Wayne ends up working instead with a sheriff (Robert Mitchum) to help a family keep their ranch out of Asner’s hands.

Plot. The family in question are the Macdonalds, with several grown sons and a feisty daughter (Michelle Carey). One of the boys takes a shot at Wayne and ends up dead. When Wayne brings his body to the ranch, Carey doesn’t believe his account of the incident and ambushes him. With a bullet now lodged near his spine, he is stricken at times by paralyzing pain that affects his shooting arm.

Drifting among the saguaros of the Southwest, he reluctantly picks up a trail buddy (James Caan), who has just killed his fourth man. Slow with a gun but quick with a knife, it seems he’s been avenging the death of an old friend, one man at a time. He adopts Wayne as a mentor.


When Wayne meets another gunman of his own professional caliber (Christopher George), he learns that the man has been hired by Asner to do the job he turned down. Wayne learns from George that while the sheriff, Mitchum, has a reputation as good with a gun, he is no longer a threat. He has been sidelined by two months of heavy drinking.

Wayne and Caan show up to give Mitchum a hand, and they wait for George and his gang. But Mitchum is in bad shape. He has hit bottom but doesn’t yet know it. The depth of his condition finally comes home to him when he is laughed at by the men in the saloon while buying another bottle of whiskey.

As soon as the gang arrives there is trouble, and Wayne and Caan get to work getting rid of them, knocking off several in the first round. Mitchum gradually gets sober but, in an exchange of gunfire, gets shot in the leg. When Asner is taken prisoner, Wayne and the others are holed up in the jail and under siege.

All is resolved finally with a shootout at the saloon. Asner bites the dust along with George and other members of the gang we’ve come to know. Wayne takes some buckshot in his leg, and as Caan leaves to follow up on a rough meeting with Carey in the straw of a stable, Wayne and Mitchum hobble down main street, each of them on a crutch.

Tone. This is a loosely meandering film that sets up a good guys vs. bad guys conflict in the opening scenes and saves the final confrontation until almost two hours later. During that time there are several characters to get to know and some lengthy conversations.

The tone of the film fluctuates between melancholy and lightly humorous, with a stretch or two of outright farce. When Macdonald says he doesn’t blame Wayne for his son’s death, Wayne turns to go, saying sadly to himself that it is not much consolation.

Meanwhile, there are several running jokes, one of them involving the riverboat gambler’s hat that Caan wears. As Mitchum slowly sobers up, he can’t remember who Caan is and keeps asking, “Who is he?” In another comic scene, Mitchum takes a much-needed bath, while everyone who visits brings him a bar of soap.

Mitchum’s alcoholism is also played for a while for laughs. When Wayne finds him passed out in a jail cell and dumps a bucket of water on him, Mitchum comes out with fists flying. Later, almost creeping away from the saloon with another bottle, he cradles it to his belly with both arms. In only a few minutes of screen time, we’ve gone from the Three Stooges to Lost Weekend.


Women. Hawks is said to have liked strong female characters in his films, and that honor in this one goes to Charlene Holt. She’s currently Mitchum’s girl when we meet her at the beginning of the movie, but she’s an old friend of Wayne.

The script by Leigh Brackett (a woman writer, by the way) does not give Holt much of a part in the plot. But Hawks makes up for this somewhat by holding the camera on her for reaction shots while the men do the talking. You see by her expression that whatever they’re deciding to do doesn’t include her. In a goodbye scene with Wayne, we watch her in the growing evening shadows as he rides off, her face registering the sadness of seeing him go—yet again.

As the final confrontation with George’s gang approaches, she tells Wayne she’s not going to bother telling him he’s crazy, because he won’t listen anyway. We are spared the usual scene in westerns, as a woman appeals to the hero to cut the heroics. But this time, it’s more obvious that what matters to the women in westerns is typically left out of the equation.

From the opening scene, when she finds Wayne and Mitchum together, you wonder which of them she will choose. Indications point to Wayne, but the final scene gives us only the two men, on their crutches, side by side. The girl we’d like to see one of them matched up with is nowhere around. And as for Caan and Carey, we learn nothing more of that couple.

It’s a man’s world in another way, too. There’s a curious twist in the respect that Wayne and George show for each other as professional gunmen. Unlike the typical villain—think of Jack Palance in Shane—George is congenial and thoughtful. When Wayne shoots him in the final shootout, George says, “You didn’t give me a chance.” Wayne replies with a smile, “You’re too good to give a chance to.”

Wrapping up. For its time, El Dorado was already an old-fashioned western. While the country was in the midst of a growing division over Vietnam between hawks and doves, the movie assumes the western’s traditionally conservative political stance. No doubt due to Wayne’s star power and long popularity, the film did well at the box office.

Music in the film was by Nelson Riddle, and the opening credits are played to a song, “El Dorado,” the lyrics first composed in a poem of the same name by Edgar Allen Poe. James Caan recites it with deliberate lack of feeling during the film, which makes an odd choice given that his character had learned it from someone he loved who is now dead.

With the credits, we see a montage of handsome western paintings by artist Olaf Wieghorst, who also has a small part in the film as a gunsmith. Filmed in widescreen and color, the movie is sparing in its use of primary colors. The opening scene of Mitchum walking down the main street of town seems to be in every dusty shade of brown and gray. Wayne’s colorful shirts and Holt’s dresses are a bright contrast.

The dust, the location footage, and Mitchum’s desperate appearance as a drunk are the film’s nods to realism. Otherwise, we get our fair share of anachronisms. The saloon has an indoor “washroom,” where a washbasin and scruffy towel would more likely be found out back in the alley. The illumination of nighttime lighting is bright for what would have been lamps and candles. The men wear modern potato chip brim hats, and Carey wears a pair of britches tight enough to get wolf whistles.

Writer Leigh Brackett also has writing credits for The Big Sleep (1946), Rio Bravo (1959), and Rio Lobo (1970). The story was based on a novel The Stars in Their Courses (1960) by Harry Brown. The film was shot in Old Tucson, the western movie set near Tucson, Arizona, and many outdoor scenes feature Arizona’s saguaros. All the same, a framed map of Texas hangs on the wall of Mitchum’s office.

El Dorado is currently available at netflix and amazon and Barnes&Noble. The DVD has an interesting audio commentary by Richard Schickel. For more of Tuesday’s Overlooked Movies, click on over to Todd Mason’s blog.