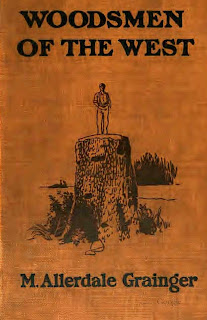 Martin Allerdale Grainger (1874-1941) was a true son of the British Empire. Born in London, he grew up in Australia, was educated at Cambridge, went to the Klondike, and served as a trooper in the Boer War. After trying placer mining and logging in British Columbia, he settled there, devoting the rest of his life to the timber industry.

Woodsmen of the West is his only novel, an autobiographical account of working for a tyrannical logger along the waters of the British Columbia shoreline. While in part a personal story, it’s also a character study of Carter, the man who hires him. Carter is a prototype of the heedless frontier entrepreneur working madly to build a business that is going to make him rich.

Character. Through most of the novel, Grainger is fascinated by the man. A novice in the woods, the narrator (called “Mart”) is impressed by the character of men like him who work alone, while at the “mercy of callous, disaster-dealing Nature.” Regardless of working conditions, they achieve results through “strain and stress of sweat, labour, hard endurance, laborious ingenuity.” Himself a man of somewhat conventional caution, Mart is in awe of Carter’s utter refusal to be daunted by any obstacle in his way.

As owner of a logging operation, he pushes himself and his men as hard as humanly possible. Utterly lacking management skills, he is a relentless slave driver. To him, he is the chief “maker” in a world of “takers.” He believes firmly that every man is a shirker, careless of the tools he’s given to use, and determined to earn a day’s dollar for as little effort as possible. Carter is the boss from hell.

Unskilled in traditional logging methods, he trashes the woods, harvesting only the shoreline edge of his timber leases. Trees felled within 1000 feet of the water can be dragged there by cable and a steam donkey engine, where they float in a boom ready to be towed to the sawmills.

Not a businessman, he is indifferent to keeping records, simply trusting contractual agreements to memory. He measures his worth in the size of the operation he owns. Though unable to tell you his net worth, he will point to his steamer, the Sonora, his much-abused donkey engine, and the logs worth $1000s waiting for delivery to the sawmills.

While aware of Carter’s disagreeable qualities, Mart regards him as a “great man” able by dint of his will to dominate men and force a fortune from the woods. Carter, he says, is living proof of “strenuous” men, working heroically, impatient to do more, inspiring workers to gladly do the impossible—all the time, making money.

Plot. The novel lacks any plot in the usual sense of the word. Instead the storyline describes an arc that begins with Mart’s arrival in Port Browning, B.C., with Carter’s offer of a job. Inexperienced at logging, Mart does whatever Carter tells him, eventually becoming the pilot of the steamer, the Sonora. Inexperienced at this as well, he learns to overcome his qualms and take bigger and bigger risks.

On a small scale, this growing denial of danger reflects that utter lack of caution in which Carter runs his logging operation. But despite his respect for Carter, Mart has his limits. When the battered and worn Sonora eventually sinks, he is given the job of taking a very leaky 18-foot rowboat sixty miles over wintry seas to get supplies for the camp. He realizes that Carter has given him an impossible and truly perilous task. He has had enough and quits.

Logging and loggers. Grainger describes loggers as an easy-going lot, as long as they are sober, and unlikely to settle disagreements with fists or weapons. Tender in their vanities, however, they are quick to perceive an insult from a boss and leave without a word of explanation. Given Carter's merciless work ethic, turn-around among his workers is usually two weeks.

The camp itself operates from three log rafts bound together into a single boom. Floating on glacier-fed waters, the buildings can easily be towed from one work site to another. The prevalence of heavy alcohol consumption means that new hires will arrive drunk, needing one or two days to recover. Fighting hangover, they resort to cures they call “dopes,” such as ginger, scent, cayenne pepper, essence of vanilla, even sea water.

Grainger mentions the dangers of work in the woods as he describes the victims of accidents being transported by steamer to doctors and hospitals in Vancouver. “Without antiseptics, bandages, skill or knowledge of the proper care of wounds,” it is a four-to-six-day journey, longer in bad weather. Some, already dead, are shipped off in boxes.

Style. For the most part, the book reads like the work of an observant journalist. Grainger has an analytical bent that produces some interesting results, as when he describes what it takes to run a successful saloon in the West. A saloonkeeper attracts and holds customers by force of his personality. He needs to appear generous while also being perceived as a shrewd businessman. He must strike a balance between offering free drinks and granting credit at times and knowing when not to.

The good fellowship atmosphere of a saloon, he says, nourishes a need for sentiment. Thus the job of saloonkeeper calls for a “suave and easy” style, “blarneying and intimate.” Allowing one’s impatience for money to show through that façade will quickly drive customers away.

Wrapping up. The value of this well-written book is the detailed portrayal of independent logging at the turn of the century and the all-male world of loggers. It’s character study of Carter and his partner Bill Allen give ample insight into the kind of men driven by the opportunity to wrench a fortune from the woods.

Woodsmen of the West is currently available online at google books and Internet Archive, and for kindle and the nook. For more Forgotten Books, click over to Patti Abbott’s blog.