Ada Woodruff Anderson, The Heart of the Red Firs (1908) 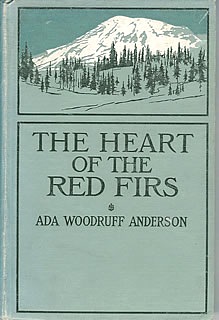 San Francisco born, Ada Woodruff Anderson (1860-1956) had been to China and back when, still a little girl, she arrived by ship in Washington’s Puget Sound. It was 1865. She remembers hearing cannons at Olympia being fired at the news of Grant’s taking of Richmond. Western Washington was to become her home, and her fiction recalls its early settlers, in a region of waters, valleys, and woods between the Olympic range and the Cascades.

Her first novel, The Heart of the Red Firs draws on her experiences there as a very young schoolteacher. At the center of the story are two sisters, Alice and Louise. Alice loves the wilderness and is on good terms with the mixed group of pioneering and homesteading settlers. Louise has married into an established family in the lumber business and is the mother of a small boy.

Plot. This is more a novel of situations than plot. Its center is a meeting ground between the conflicting aspirations of its several characters. In an early chapter, Alice turns down an offer of marriage from a man who wants them to be more than just good friends. She agrees instead to marry a much older man, who has been her guardian—but at some future date. She stays behind as he goes off to serve a term in Congress.

Louise spends her days in an isolated house at the sawmills owned in part by Philip Kingsley. She is often deserted by him and left alone with her son. Depressed and lonely, she eventually learns that her husband has allowed his yacht to be used for smuggling opium into the country from Victoria in Canada.

The villain of the novel is Stratton, an importer of furs and the mastermind behind the opium smuggling. Working for him are several ruffians, who help him transport the drug once it’s been brought ashore.

This all transpires under Alice’s unsuspecting nose. She is likewise unaware that Stratton has designs on her. He tells her he’ll spirit her away to a better life, even if he must do so by force. She, of course, is shocked.

As is Louise when she learns the full extent of her husband’s duplicity. Besides neglecting her and their young son, he has dipped deeply into company funds to finance a free-living lifestyle. When the Panic of 1907 strikes the lumber industry, he is too far in debt to avert bankruptcy.

Louise saves him from U.S. Customs when they suspect him of drug trafficking. She finds a chest full of opium in an abandoned hotel and disposes of it by putting it through a rotten floor into a high tide. But it’s not for love of him that she’s done it. She cannot bear the shame that would befall the family should he be arrested. When he confesses to her and begs forgiveness, she’s packing her bags and intends never to lay eyes on him again.

Character. It takes two years for all this to transpire. During that time, the one man of noble character is Paul Forrest, who redeems his gender with admirable behavior. Paul is the one whose offer of marriage is declined by Alice at the novel’s start. He has been prospecting in the mountains and has found what promises to be a rich seam of gold. Only trouble is, after staking his claim, he’s been unable to relocate it.

Down to his last dollar, he’s taken a job as manager at the Kingsley sawmills to replenish his savings. The job is not to his liking; he’s too much an outdoorsman to be stuck behind a desk. But as he sees Louise increasingly bereft in her isolation, he befriends her, once risking his life to cross the harbor in a storm to fetch a doctor for the boy.

Romance. It is Paul who has the tenderest romantic feelings in the novel. First spurned by Alice, he falls hard for Louise. The bond that grows between them crosses into what is for this novel dangerous moral ground. But Anderson lets her narrative only flirt with the prospect of an adulterous affair.

Paul is too decent a man for such an indecency, and Louise is too much the product of generations of New England Puritan stock. It is more in her makeup to sink into a dreamy depression, not to reach out for solace to a man who is not her husband.

Alice, meanwhile, is enchanted with her life of independence in the woods, as a schoolteacher and a homesteader. Promising marriage to a rich, fatherly man who is a continent away in the halls of Congress suits her fine. She seems intent on sidestepping the whole messy matter of romance entirely.


Villainy. We never get much information about Stratton’s henchmen, who are Anderson’s most despicable characters. They lurk on the margins of the story. Of one, we learn from hearsay that he is a wife beater and child abuser. The others live rough in the woods, stealing a gun or an axe or taking milk from someone’s cow.

Stratton, a man of some gentlemanly refinement, moves in social circles that put him in the company of Alice and Louise. Thus Anderson is able to reveal him at closer range. She also shows interest in the psychology of a privileged man whose behavior falls far short of ideal. He’s a dope-smuggler, in spite of what Alice sees as “strong undercurrents of fine feeling” and a manner that is consistently “courteous and chivalrous.”

It turns out that his worldly mother, a French Creole, hung out with the wrong sort and failed to provide proper moral instruction. She encouraged him to adopt a self-serving credo. “I live my life,” he tells Alice. “I do as I please. I ask nothing of anyone. And in the end—I take what I deserve.”

Wrapping up. The novel’s overall idea seems to be that men generally lack character and women can be poor judges of them. Meanwhile, men get what they deserve. The villains have mostly been rewarded for their wrong-doing. Stratton drowns, and Kingsley loses his wife and son. Thanks to a rockslide that nearly kills him, Paul Forrest finds his lost mining claim. And in the last paragraphs, he hears Alice confess her love to him.

Married in 1885, Ada Woodruff Anderson lived much of the rest of her life in Seattle. She began writing in her forties and published a handful of stories in the magazines plus two more novels, The Strain of White (1909) and The Rim of the Desert (1915).

The Heart of the Red Firs is currently available online at google books and Internet Archive. For more of Friday’s Forgotten books, click over to Patti Abbott’s blog.

Illustrations: From the first edition by Charles Grunwald