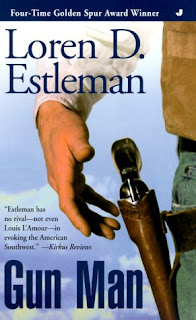 Stories of gun men and guns are normally taken dead seriously in the traditional western. Humor and irony may be found in their gallows varieties, and then only in the voices of one or more characters. But Estleman infuses this entire novel with a wry, amusing tone.

It takes the elements of the standard story of the frontier gunslinger and imagines how they might have been in the case of a single young man. The humor deromanticizes gunslingers and diminishes the stature that legend gives them. But it’s of a piece with the droll self-deprecating wit found among westerners, which gives a subject weight by not being serious about it.

Plot. The novel tells the life story of an Iowa boy who leaves the farm at the age of twelve and, by chance, shoots a man down before he turns thirteen. The place being Missouri and the years being the bloody decade before the Civil War, he is soon running with an anti-abolitionist militia, and in time we find him in the Old West, with a reputation as Killer Miller.

We know Miller for what he is, no smarter than he needs to be and not all that menacing. He’s not the fastest gun by far but the veteran of numerous gunfights simply by taking better aim. More or less indifferent to the welfare of others, he’s neither cold-hearted nor warm-hearted. He’s also no sociopath. Not a bad man, he lacks redeeming qualities that would make him a “good” bad man.

He is motivated to kill by little more than everyday self-preservation. Lacking schooling and the skills needed for most other kinds of employment, his options for making a living are otherwise limited. In time, he gets work as a regulator for a stockmen’s association, and like Tom Horn finds himself behind bars.

Style and structure. The narrative jumps ahead in leaps and bounds. We find Miller at different points in his life as militia rider, Union captive, bounty hunter, town marshal, line rider, and range detective. A suspenseful shootout in the streets of Emporia, Kansas, harks in its way to the well-known one between the Earps and the Clantons.

The account of this gun man’s life is narrated as biography, with dates and places and reference to historical documents. We are told for example, “The first recorded confrontation between the whiskey runner and the marshal took place in June 1866.” The entire text of personal letters is also included at key points.

As biographies do, it weighs the credibility of evidence and speculates on interpretations of incomplete facts. It slips in and out of chronological sequence, alluding to events that occur much later. At one point it cites the recollection of the last surviving witness of a gun battle, a child at the time, who lived until 1936.

Meanwhile, there are repeated references to the exaggerations of the dime novelists, one of whom calls himself a “contemporary historian.” He interviews Miller in the last hour before a gun duel. And we are taken to a theatrical performance in Chicago by a Wild West outlaw telling the more or less factual story of his life on the frontier. But bare facts, as it turns out, have scant appeal next to the romance and excitement of yellowback adventures.

Bare fact, in Eslteman’s treatment of it, is adorned instead with the many forms of irony, a fictional biography being one of them. Another is the way the telling of the story slips easily between the historian’s objectivity and the knowing narration of an omniscient author.

A statement of fact makes a removed report of an incident grounded in solid reality:

Earl Weathers’s brother drew a Peacemaker on the ex-defendant on Miller’s way out of the courthouse and was shot to death by two deputy U.S. marshals standing nearby. Gouges made by the stray bullets are still visible on the lobby’s marble walls.

That same narrative voice is not only privy to Miller’s thoughts and emotions. It also has an attitude. After killing his second man, an Indian, the youth rides off exhilarated.

He felt fresh-born. At the time he confused the feeling with freedom, but in later years he would come to know it as the inevitable aftermath of having killed.

The novel is rich in colorful detail as it populates the West with sharply defined characters, each one of a kind. Nearly everyone is introduced with a full description of their appearance: clothing, height, build, hair, beard, and eye color. As one example, we get

a small man shorter than Miller, in a dark gray suit and black cravat with a steel watch chain strung across a thickening middle. There was more gray than black in his close-cropped beard and he had a few steely hairs combed diagonally across a skull that was otherwise bare. His eyes were a curious light gray.

The detail of height is frequently made because Miller is shorter than average. Weapons carried are typically also specified in precise detail. After searching 26 years for one he likes, Miller finally settles on

a .38 Colt’s Lightning double-action revolver he had bought from the widow of a sheriff’s deputy shot down by a drunk he was arresting in Omaha. The whole thing was only eight-and-a-half inches long, about the length of the barrel of his old Remington, and he liked that and the reliability of the center-fire cartridges and the time gained in not having to cock the hammer.

Dialogue is often laconic and dead honest. Exceptions occur where characters are given to circumlocutions of understatement, or, as in the case of newspaper editor, falling under the spell of his own words.

Wrapping up. Estleman is that rare combination of popular storyteller and writer’s writer. There’s a whole world of both pleasure and instruction to be taken in his mastery of the craft. He also does justice to history. Among other things, his novel concerns the generation of young men who lived through the Civil War. He also captures something of the social turmoil that followed that conflict and spilled into the expanding West.

Still, for all that, the novel is an entertaining play on the legendary West that doesn’t want to be taken all that seriously. If it were a movie, you could imagine Steve McQueen in the lead role, an actor who could embody both emotional reserve and intense determination on screen. Other actors could slip easily into other roles: Chill Wills and John Goodman in particular.

Gun Man is currently available at amazon, Barnes&Noble, and AbeBooks. For more of Friday’s Forgotten Books, click on over to Patti Abbott’s blog.
Tweet