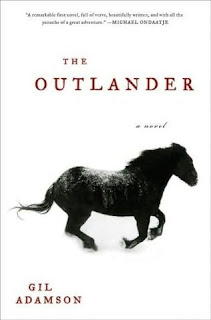 The frontier is a natural setting for outliers, people driven by circumstances to the fringes of civilization or choosing of their own accord to live there. We take that for granted about western fiction, with its outlaws and lone lawmen. Adamson’s novel flips over that set of conventions and examines them from their dark underside.

Plot. Her central character is a young woman, Mary, herself an outlier on the frontier by virtue of her gender. Women were in short supply in the Old West, and Adamson would have us be aware of what that might have been like for an unattached young woman—who also happens to be a fugitive.

Mary is a widow, having shot her husband, and we don’t know why for half of the novel. What matters is that she is being relentlessly pursued by the identical twin brothers of her former husband. It doesn’t matter that she might have had good reason to kill the man. They intend to run her down and put her behind bars.

Crossing the sparsely settled terrain of western Canada, she encounters a string of people who, like herself, are outliers—or “outlanders” as the story prefers to call them. There’s a batty old woman in a decaying house that seems lifted from a Southern Gothic novel. Then she’s found by a mountain man, William Moreland, who lives off the land and what he can pilfer from forest ranger stations. They venture into a tempestuous sexual relationship that lasts until she wakes one morning alone again.

She encounters an English-speaking Crow Indian, born in Baltimore, now returned to his tribe with a white wife. And so on, until she fetches up in a mining camp called Frank. There she’s given shelter by a friendly minister, and she takes a job at a supply store run by a dwarf. Meanwhile, she is being sought by both her twin brothers-in-law and Moreland, who regrets that he left her. All three eventually catch up with her, but not for long.

Storytelling style.  Adamson is a writer of poetry and short fiction. The narrative has that loosely structured quality of stories strung together with characters that come and go. The voice is often elusive and dreamlike, slow-paced, especially the opening 80 pages.

There we learn that she killed her husband after the birth and death of an infant. She seems unhinged, traumatized, unfocused, though super aware of her surroundings. She has unsettling flashbacks and hallucinations, hears voices.

Poetic passages emerge in the narrative like interludes of song. Here Adamson describes a dream of Mary’s father, who was an Anglican priest:

Her father stood to his waist in rushing water, fishing rod held high above his head. The sun was sharp on the corded water, dancing like pennies on a blanket. She saw his thick black shirt, the stiff collar glinting like metal, and his gaze was fixed on the river. He took a step deeper into the cold water, gave the rod a gentle tug, another tug. The unseen fish fought ferociously, the line of its life leading to his hand.

Brings favorably to mind Norman Maclean’s A River Runs Through It. And then there is an entertaining series of ghost stories told by a gathering of miners.

The novel is not strongly plotted, but Adamson’s characters are clearly drawn and wonderments, all of them. Remarkably, eight brothers arrive from Bozeman with stolen horses to sell. Mary notes how each man’s personality differs from the others, all of them equally congenial and likable. Her nuanced portrayal of the identical twins, Julian and Jude—almost but not quite the same—is full of ironies, right to the end.

Wrapping up. Originally published in 2008, Adamson’s novel is yet another voice in the growing bookshelf of frontier fiction. In its own way, it frees the Old West from the myths that dominate the western. For one thing, it is a woman’s story, but set free from the usual conventions of the genre. She’s neither cooking and mending clothes for a frontier family nor renting out her body in a tawdry saloon.

Instead Adamson wonders how it would be for a woman to survive, even thrive, when cast in a role typically given to men in the western. And how does she do that without becoming masculinized, as is often represented in western movies? Think of Joan Crawford and Mercedes McCambridge in Johnny Guitar. Adamson’s novel makes for interesting speculation and a taut adventure.

The Outlander is currently available at amazon, Barnes&Noble, Powell's Books, and AbeBooks and for kindle and the nook.
Tweet