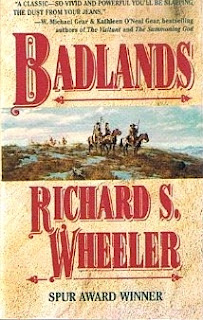 The western lends itself well to a particular kind of story—the small group of travelers crossing a forbidding terrain. Far from civilization, they are at the mercy of hostile elements, human and nonhuman. Richard Wheeler’s novel offers an interesting twist on that formula as he sends an expedition of scientists into the badlands of Nebraska Territory in the summer of 1859.

Among the small troop are men and women of honorable or questionable character, and circumstances bring out the best and worst in them. One or more of them rise to a kind of heroism in the face of adversity, others sink into depravity, and two will fall in love. It’s the world in microcosm.

Plot. Wheeler’s scientists include three paleontologists in search of fossils. A fourth is an ethnologist studying the native populations of the plains. Briefly outlined, the novel tells of how their fieldwork arouses the distrust of nearby Sioux, while the greed and disrespect of one of the party put all their lives in jeopardy.

The danger in which they find themselves grows only gradually. The reaction of the Indians, though unpredictable and potentially menacing, remains for a long time reserved and patient. Though intruders, the whites are granted the courtesy afforded to guests, and they are also subjects of immense curiosity.

When the ethnologist desecrates a burial site, the Indians give them all a polite warning and are pacified after negotiating a measure of restitution. Refusing to be warned, however, the ethnologist continues in his pillage of sacred Sioux artifacts and when discovered raises doubt that any of them will return to civilization alive.

Characters.  The story is chiefly in the characters themselves. Heading up the expedition is Cyrus Wood, an aging Harvard professor of paleontology. His grant from the Smithsonian has given him a last chance to win the fame that has long eluded him. Another paleontologist is a physician from North Carolina, an irritating man aptly named Roderick Crabtree. Tending to his daily needs is his black slave, Gracie.

The ethnologist, Archimedes Van Vliet, is greedy for fame, the selfless pursuit of pure science be hanged. He is also overly dependent on alcohol, which abets his reckless disregard for consequences.

All three men are nettled by the presence among them of an English woman, Candace Huxtable. An amateur fossil hunter, she has made of herself an unwelcome tag-along, coming all the way from Cambridge at her own expense to carry on the work of her departed father. With her, to ensure propriety for a woman traveling alone, is her hired chaperone, Mrs. Rumley.

The expedition’s scout, Rufus Crowe,  is a self-educated frontiersman, who reads the scientific journals when he isn’t otherwise employed. Fluent in the language of the Lakota, he has been adopted by one of the tribes. Though accompanied by an Indian wife, he befriends Miss Huxtable, assists in her fieldwork, and falls hopelessly in love with her.

Themes. The novel has a number of ideas going. Prominent is its inquiry into the assumptions underlying scientific research. The three credentialed scientists, Wood, Crabtree, and Van Vliet, are each driven by a desire for the recognition of their peers—in a word, fame. In Wood it’s a desperate need, because without a great discovery he is destined to oblivion, his undistinguished work being of no great note.

For Crabtree, scientific inquiry is a way to shame and humiliate men of lesser minds. As an avowed atheist, he’s especially determined to banish the idea of God from all scientific study. Thus, he’s at odds with Miss Huxtable, who is looking for evidence supporting her father’s creationist hypotheses, which accept but modify Darwin’s theory of evolution.

Van Vliet uses the lofty goals of scientific fieldwork as a cover for what amounts to nothing more than grave robbing. He hopes to assemble a massive collection of museum-quality Sioux artifacts that will be the envy of the world. The careful documenting of his discovery, for others in his field, is of no interest to him.

As scientists of any stripe, the four disturb the religious beliefs of the Sioux, for whom the natural world is teeming with spirits and the supernatural. For them, the fossils are the remains of monsters once driven underground by God. The artifacts stolen by Van Vliet are essential to the afterlife journeys of the deceased.

An unquestioned assumption of the entire party is the inferiority of native culture to their own more advanced one. Only Crowe, who lives in both worlds, is able to pursue scientific study while respecting the integrity of the Sioux. Unfettered by academic politics, the importance of credentials, and professional jealousies, he practices a purer form of scientific inquiry that acquires knowledge for its own sake. It honors nature and cultures without plundering them for personal gain.

Women. Miss Huxtable’s whalebone corset is an emblem of the Victorian respectability that prevails for women of her class. It represents everything that prevents her from being a fully recognized scientist, from the denial to her of a university education to simple freedom of movement. Like Gracie, the black slave, she is expected to be no more than a drudge, performing the laborious tasks that the men do not deign to do.

Social class and condition also prevent her from yielding to the simple need of the heart, to be tenderly loved. An unguarded moment with Rufus Crowe makes her aware of how emotionally empty her life has been—and will continue to be. But despite all that, she exercises a flinty resolve to triumph, even winning the respect and gratitude of Professor Wood, who has tried from the start to “keep her in her place.”

Wrapping up. As is typical of Wheeler’s historical fiction, the novel has been well researched. A reader can marvel at the careful craftsmanship, immense variety, and significance of Sioux burial artifacts. There are also lessons in high plains geology and the painstaking process of chipping fossils out of the earth.

The novel is well immersed in its time. We are reminded of the isolation to be felt on the plains, as the party travels days to their site from the nearest trading post on the Missouri. There’s the lack of relief from the blistering summer heat, the lack of good water, the need for horses. Familiar human issues—pride, greed, desire, love—are transformed by being transported to a time and place so different from our own.

Badlands is currently available at Powell's Books, AbeBooks, and for kindle and the nook. For more of Friday’s Forgotten Books, click on over to Patti Abbott’s blog.
Tweet