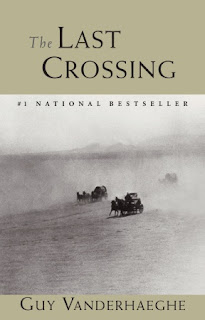 This is a western for people who don’t like westerns. It takes a reader onto the raw frontier of 1871 and, like Lonesome Dove, follows a small band of characters as they make a long overland journey. In this case, the novel opens in Fort Benton on the upper reaches of the Missouri River in Montana Territory, and its characters travel to Edmonton, Alberta, and back.

Like McMurtry’s novel, its story is different from the traditional western’s more usual quest of an individual hero to bring outlaws to justice against all odds. McMurtry and Vanderhaeghe take the usual topics of frontier fiction—loyalty, friendship, love, courage, family, integrity, and so on. But enliven them in a way meant to appeal to a broad audience.

Plot.  The back cover will tell you that the story is about two English brothers in search of a third one who has disappeared in the American wilderness. That’s only one thread of a tangled plot line that involves a battle-scarred Civil War veteran, an Irish saloon keeper, a mixed-blood Blackfeet-Scots scout, a writer of adventure books, a woman abandoned by her husband, and yet another pair of brothers believed to have murdered the woman’s sister.

The characters press northward from Fort Benton into Canada, following scant evidence that the missing brother is still alive. He seems likely to have died from misadventure or to have been killed by Indians. Members of the search party itself are hardly sanguine in each other’s company. Addington and Charles, the missing man’s brothers, have a long history of mutual distrust. Meanwhile, two of the men are enamored of the woman traveling with them.

Near the end of almost 400 pages, there are revelations that clear up some mysteries while producing others. Before the story is done, we have lost a character or two along the way, and in the final chapters, one of the brothers returns to England.

Character. Charles is a modestly talented portraitist, who has disappointed both Addington and their wealthy father by having no talent for brutal domination of others. Addington, who represents the high tide of British imperialism, is a proud, angry man, determined to leave his mark by killing a grizzly with a longbow. Given to pontificating, he says that what defines a man is his relentless effort to overcome any obstacle. To that end, he has engaged a writer to enshrine his achievements in a book about himself.

We get to know the third brother, Simon, in the memories that Charles has of him. Simon has been swept up by the Victorian interest in spiritualism. A student at Oxford and dressed like Matthew Arnold’s “scholar gypsy,” he abandons his books to learn directly from nature. Before leaving for America, he becomes involved in a dubious religious sect that believes Indians are the Lost Tribes of Israel.

In Custis Straw, a Fort Benton resident and horse trader, we relive a day of bloody carnage on the battlefield during the War Between the States. Badly injured, he is carried from a stand of burning woods, leaving behind a dying friend who has been bayoneted. The horror of those memories is laden with the guilt of abandoning his friend to the flames.

Jerry Potts, the mixed-blood scout, mourns the loss of his Crow wife and son, who have deserted him to return to her people. Remembering the cause of her leaving, he thinks of how “one instant of anger, one moment of unkindness, is enough to drive what you love far beyond your reach.” As the Blackfeet die from white men’s bullets and small pox, he is torn by the dishonor brought to his people. Yet he feels compelled “to save white men from themselves.”

Style. The novel is really a catalog of incidents and flashbacks, each meant chiefly to illuminate individual characters more deeply. With point of view alternating among a half dozen of them, their inner lives are opened to us, while they remain largely opaque to one another.

The novel is told mostly in first person, present tense. As in Richard Wheeler’s Eclipse (recently reviewed here), characters report to us shortly after action occurs so that a section might begin, “We finally worked ourselves clear of the Sand Hills a couple hours back. . .” The device produces a curious sort of immediacy, like those video monologues in reality shows, where participants speak directly into the camera about what has just happened.

There are parallels to be found throughout. The brothers Addington and Charles find a twisted reflection in the vicious Kelso brothers, who kill a whiskey trader and his black assistant. And there are two pairs of mixed-blood brothers, as Potts and two fellow scouts, the McKays, join the Blackfeet in a battle with the Cree who are being led by the fierce, blond-haired Sutherland brothers.

Wrapping up. The Last Crossing won CBC Radio’s Canada Reads Award when it was first published in 2002. It has been a bestseller and received honors, so my own quibbles are hardly going to do the novel any damage. But I did have some.

It’s a quirk of mine while reading a novel that I’m always looking for subtext: themes and ideas, values in conflict, questions in search of answers—all of this going on along with the story. I could just be obtuse, but I could never find much of that in this novel. There seemed to be little going on under the surface.

My interest rarely flagged, but it was mostly because the point of view kept shifting and there was always the question of what we’d learn about the disappearance of the third brother, Simon. The end of a novel, which is normally where plot conflicts are resolved, is often where issues in the subtext get resolved, too. But looking there I see only a kind of fading out of whatever animated the preceding chapters.

The narrative leaps ahead from 1871 to the 1890s, summing up the 20-25 years that pass and accounting finally for the meaning of the book’s title. A tone of loss and melancholy pervades these last chapters, ending with a scene in which there’s another revelation of note for one of the protagonists. But when I try to connect all the dots of the novel, they won’t add up.

Like I say, it’s a quibble. For most readers of frontier fiction, The Last Crossing will be an exciting adventure, for it offers an extended immersion in a time and place in much the way McMurtry does in Lonesome Dove. It was that way for me, but that’s all it was. The Last Crossing is currently available at amazon, Barnes&Noble, Powell’s Books, and AbeBooks.
Tweet