Revising my review of this novel for my book about early frontier fiction, I realized that the first draft, posted here almost three years ago, was embarrassingly awful. Here is the new improved blog version. 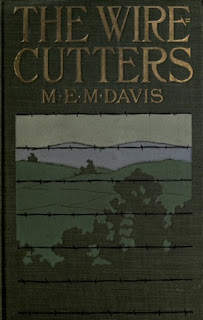 It has been argued that The Wire-Cutters by Mollie Evelyn Moore Davis (1844-1909) was the first western novel. It predates Owen Wister’s The Virginian by three years. Much of it is set during a range war that erupted in West Texas in the 1880s with the introduction of barbed wire fences across open range. It was written by a writer who knew West Texas from having lived there.

But it’s a western without cowboys. The hero rides a horse and is a frontier settler with some cattle, but his main cash crops are cotton and pecans. Also, a third of the novel takes place in the Deep South, beginning and ending with a heavy serving of melodrama. Looking for an authentic cowboy novel that predates The Virginian, a reader would do well to consider Wister’s own Lin McLean (1897).

Plot. The central character, Leroy Hilliard, does not know that he was born to a wealthy Louisiana plantation owner and his wife. Because he bears a mysterious resemblance to his mother’s divorced first husband, she has her second husband get rid of the boy. Without her knowledge, he is adopted by a high-ranking Confederate officer, whom he comes to believe is his actual father. In fact, the man is her much loathed first husband.

Years pass and the now grown-up Hilliard goes to West Texas, where he has bought a farm. When barbwire fences begin cropping up across the countryside and preventing open range cattle from getting to water, he’s among the first to oppose them. But the arrival of a rich, idle, unscrupulous young man, Alan Deerford, stirs up trouble for him. When Hilliard declines to disturb fences that have been erected legally, Deerford leads the local young men on nighttime raids of more wire cutting.

Deerford has a bad influence on an impressionable younger man, Jack, who was once Hilliard’s best friend. Jack goes missing and foul play is feared. In time, his body is found with Deerford’s knife through his heart, and Deerford has disappeared. Meanwhile, the gang of young wire-cutters is jailed for their mischief.

Hilliard magnanimously comes to their defense, acting as their attorney at the trial. After an impassioned plea, he gets a not guilty decision from the jury. He then pursues Deerford to bring him to justice and finds him at the Louisiana plantation where the story started and a cascade of revelations awaits both men.

Romance. Intertwined with the tangled plot of the two men is a romance in which they are rivals for the hand of the same woman, the pretty Helen Wingate. She has come west from Kentucky as a guest of a schoolmate, Margaret Ransome, who is Hilliard’s close friend.

He is instantly taken with Helen. But he soon realizes that Deerford intends her to be his wife as well. We don’t know until well into the novel that Helen does not love Deerford and accepts his attentions only out of a mixture of fear and politeness. As she abruptly leaves to return home, Hilliard is pleased to learn that she is quite fond of him and will happily entertain a proposal of marriage. But in an impulsive moment, she marries Deerford, who is one step ahead of the law, and sails off with him to Europe.

Hilliard’s friend Margaret has much more to commend her as a wife and soul mate. She is brave, thoughtful, attentive to the needs of others. You don’t have to read deeply between the lines to see that she loves Hilliard. We keep expecting him to realize this, but there is little to indicate at novel’s end that he and Margaret are destined to be together.

Character. Settling in Texas, Hilliard is good humored and shows his grit by never complaining. His neighbors quickly warm to him as he shows himself able to “straddle a horse and shoot a rifle, sleep on the ground in camp,” and join the men in talk about politics. At social gatherings, he catches the eye of the women, who find him to be a good dancer and candy-puller.

He stands out as a principled man by comparison with most of the other men of the community, whose ethics are flexible. He respects the law and does the right thing, though it means the loss his popularity. He becomes an honorable man with few friends.

Style. The Wire-Cutters is an interesting example of a hybrid novel, mixing plantation and western themes. On the one hand is an ante-bellum sensibility, with a refined Southern aristocracy and its “negro” retainers. On the other is the egalitarian spirit of the frontier. Each world gets its own style of storytelling.

The plantation chapters have a sunny, dewy, perfumed exterior, but dark passions seethe under the surface. A young and unhappy wife takes a knife to a portrait of her husband, slashing his image across the cheek. An image of this same slash shows up as a birthmark on her first son’s face. Southern gothic comes to mind.

The Texas chapters are sharply realistic, with dusty roads, blistering heat and blue northers, and cattle dying of thirst on the open range. The social fabric is richly detailed, the country folk often comically portrayed.

One example: Between services at Sunday church gathering, the men group outdoors on one side of the church and the women on another. The girls studiously avoid eye contact with the eligible bachelors, who wait until leaving time to race after them on their horses and ride along next to them.

Wrapping up. Davis was born in Alabama. From 1855, her family lived in Texas, and she earned a reputation as a poet. Marriage took her to New Orleans in 1879, where her husband was editor of the New Orleans Picayune. A prominent figure in literary circles there, she later became a newspaper editor herself, while continuing to write fiction and poetry.

The Wire-Cutters was preceded by Under the Man-fig (1895), a novel set in a Texas river town on the Brazos. It is a romanticized account of plantation life in the years before, during, and after the Civil War. A collection of short stories, An Elephant’s Trunk (1897), included titles previously published in Atlantic and Harper’s. The same year saw her history of Texas, Under Six Flags.

The Wire Cutters is currently available online at google books and Internet Archive. A modern edition (Texas A&M Press, 1997) can be found at amazon, Barnes&Noble, Powell's Books, and AbeBooks. For more of Friday’s Forgotten Books, click on over to Patti Abbott’s blog.
Tweet

Coming up: Glossary of frontier fiction: A