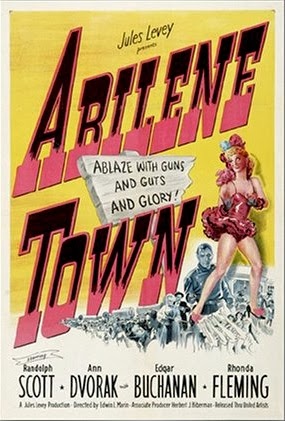 This post-war western comes wrapped in the American flag. In a story about conflict in a Kansas frontier town between cattlemen and homesteaders, it celebrates the defeat of lawlessness and the triumph of democratic articles of faith. In the end, the battle is literally taken to the streets as trail-hardened cowboys wreak havoc on private property and farmers and peace-loving citizens march against them to the rousing chorus of “The Battle Hymn of the Republic.”

Instrumental in the defense of law and order is the town marshal (Randolph Scott), who negotiates the hostilities of all the interested parties. He is a pragmatist and avoids making enemies. As played by Scott, he exhibits intelligence, patience, and a lack of fear. He is also tall, lean, and handsome in a role that brings to mind lawman and peacekeeper Wyatt Earp.

Scott dutifully enforces a town ordinance that keeps the saloons doing business on one side of town and the providers of goods and services for law-abiding, church-going citizens on the other. He also monitors the surrender of firearms in the interest of public safety.

Plot. The year is 1870, a key moment in frontier history, as cattle drives from Texas to the railways in Kansas are reaching a peak. Homesteaders are crowding in from the east, introducing barbwire to fence off the open range. The merchants of Abilene have divided loyalties. The cowboys spend freely when they arrive in town, and accommodating the homesteaders threatens to disrupt the cash flow.


Eventually, Abilene’s businessmen yield to reason, as an ambitious young homesteader (Lloyd Bridges) convinces them that an influx of farmers means year-round customers and the growth of a substantial local economy. One cattleman refuses to be daunted. He orders his cowboys to stampede a herd through the farmers’ fences and sets their buildings ablaze. When Scott has the saloons close their doors to keep the cowboys from getting liquored up and causing more trouble, they smash their way in.

Eventually, there is a facedown in the streets as farmers and citizens unite, and Scott sends the cowboys out of town. “This is the way a tough street dies,” he tells them. “Not with a roar but a whine.”

Women and romance. The script gives Scott two romantic interests, an Abilene merchant’s daughter (Rhonda Fleming) and a saloon chanteuse (Ann Dvorak). Fleming is a modestly dressed model of propriety. Dvorak is leggy in abbreviated costumes, struts her stuff on the stage with a line of chorus girls, and sings salty songs to the delight of the customers.

Scott and Fleming seem to be an item, but he’s clearly more than taken with Dvorak, suffering her kicks to his shins whenever she feels like throwing a girlish tantrum, which is frequent. In the end, he happily surrenders any claim to Fleming when she decides to throw in with boyishly handsome Bridges, a man with persuasive beliefs and a plan for the future.

Rescuing Dvorak in the melee that engulfs the saloon where she works, Scott carries her through a window. As she relents, accepting his offer of marriage and a stable life as homesteaders, he reminds her that she’ll have to wear an apron. For her, he has to agree that he won’t grow a beard. In one of the final shots, we get three couples standing side by side: Scott and Dvorak, Fleming and Bridges, the sheriff (Edgar Buchanan) and his landlady (Helen Boyce). And so, domesticity, law and order triumph.

Conventions. Fleming’s break with Scott comes in the predictable scene in which a woman begs the western hero to give up his risky life, afraid that he will be killed. “Take me away,” she begs him. When he tells her that fearing for his life would take half the fun out of it, she accuses him of enjoying the killing. “Please resign and go away,” she says and leaves him standing with his horse. The horse, of course, sticks with him.

As in other 1940s westerns, a character who is a saloon singer calls for musical interludes, as if the scene had time traveled to a modern-day nightclub. Dvorak sings and cavorts through several numbers, none of them authentic to the period. “I love it out here in the West because the life is free and easy,” she sings at one point, “You can do anything you doggone please.” You can see her in this clip from the opening of the film:

Wrapping up. Randolph Scott is just fine in this film. The gravity, good looks, and charm he would bring to a long series of western roles are already in full evidence. The supporting cast includes a favorite character actor, Edgar Buchanan, as the stereotypical county sheriff always avoiding involvement in lawbreaking that is “outside his jurisdiction.” The cinematography, direction, and editing are no better than routine, but they keep the large cast of characters and their shifting alliances always clear.

Director Edwin L. Marin made several other westerns in this period, including John Wayne’s Tall in the Saddle (1944). Harold Shumate provided the screenplay, which was based on the novel Trail Town (1941) by veteran western writer Ernest Haycox. The 89-minute film was shot in Agoura, California.