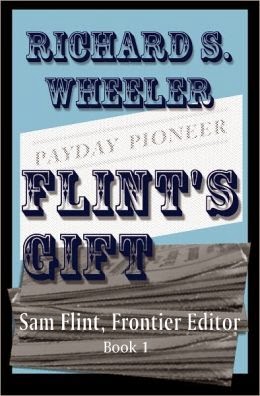 “Profiles in Courage” would have been a good title for this novel of life in a frontier settlement in Arizona Territory. The title character, Sam Flint, is a young newspaper editor who sets up his press in little Payday, agreeing to boost the town in the interests of its growth, in return for complete freedom to print all the news he finds fit to print.

Plot. His editorial encomiums to Payday’s edenic virtues soon bring settlers and new residents. And with them comes a pack of unexpected trouble. A cattleman, Clayton Buell, long used to free use of open range for his stock brutally resists the attempts of families to homestead on public land he deems his own.

Worse yet, a black-clad business entrepreneur, Odie Racine, throws up a saloon called the Golden Calf that draws in an unwelcome element for drink, gambling, prostitution, and related forms of crime and vice. To tighten her grip on the town, she introduces a protection racket, extorting the town’s business owners, under threat of being pulverized by a couple of her brass knuckled thugs. Soon, as the sheriff and judge yield to pressure, duly constituted authority, law and order have been undermined and compromised.

As Odie and her goons monitor the content of Flint’s newspaper each week, he falls prey to her as well. Meanwhile, he has the ire of Clayton Buell to deal with. The rancher follows through on a threat to horsewhip him should Flint print a word about his unlawful tactics preventing homesteaders from settling on his range.

Tension and suspense build in the novel as Flint plots to save himself, the newspaper, and the town. One by one, others join him in resistance, each finding the courage to put their lives on the line.

Storytelling style. Wheeler is adept at this kind of storytelling. We get an ensemble of characters, with shifting points of view and one of them, the editor Flint, at the center. As they comprise a community, we learn what drives and motivates each of them, as well as their secrets and regrets. There grows in the reader a sense of loyalty to them, the kind that made of Gunsmoke an irresistible weekly formula on TV.


Something else of note in the novel is the legacy of the Civil War, which colors relationships between characters and darkens the inner lives of those who lived through it. Westerns and frontier fiction often dismiss the Civil War as a closed chapter in the history books. This should not be surprising in a culture that tends to lack interest in history, believes in “moving on,” and shows little patience for those who choose to “live in the past.”

The Civil War may live on today for traditional western readers enamored by the romance of rebellion. But it’s often used as pretext for revenge plots, an excuse for more killing. Or as defiant posturing, as when someone these days unfurls a Confederate flag before news cameras in front of the White House.

In Wheeler’s novels of the West, the Civil War remains a dislocating national and social upheaval in recent memory. His veterans of that war have been scarred and disillusioned. In this novel, it has made one of them a sworn pacifist. Another has lost livelihood, home and hearth, his wife driven insane, his soul so damaged by witnessing the wanton destructiveness of other men that he believes himself bound for hell.

Another man, refusing to take up arms in the war has fled west, condemned by his family, and lives in secret shame as a coward. They are the war’s walking wounded.

It is now 1877, and the younger Flint represents a post-war generation, with a calling informed by the ethics of honest and uncompromising journalism. The “gift” he brings to the community of Payday is a healing of differences that comes with his acceptance of the residents as human, despite the damage that has been done to them. And his courage in the face of injustice and criminality inspires them to hold onto a lost idealism that will lay to rest lingering hostilities and build a future for the next generation.

Wrapping up. Flint’s Gift is the first in a series of three novels by Richard Wheeler featuring editor Sam Flint. It was followed by Flint’s Truth (1998) and Flint’s Honor (1999).

Flint’s Gift is currently available in print, ebook and audio formats at amazon, Barnes&Noble, Powell’s Books, and AbeBooks. For more of Friday’s Forgotten Books, click on over to Patti Abbott’s blog.
Tweet