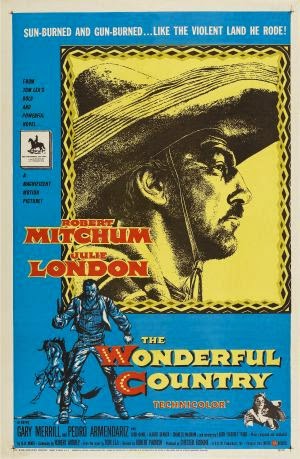 Based on Tom Lea’s 1952 border novel of the same name, this Robert Mitchum western tells a story of a man without a country, wonderful or otherwise. Fleeing to Mexico as a boy, after killing the man who murdered his father, he becomes a pistolero for a powerful Mexican family, the Castros.

Plot. Older now, he  crosses the border into Texas, where a broken leg keeps him from returning to Mexico with a shipment of contraband rifles. Recovering, he befriends a German immigrant, is offered a job with the Texas Rangers, and meets the newly arrived commanding officer (Gary Merrill) at a nearby Army post. He also meets Merrill’s discontented wife (Julie London).

When it looks like Mitchum is about to start a new life, gainfully employed and reclaiming his lost identity as an American citizen, he finds himself in deep trouble and fleeing once more across the border. There is no real sanctuary for him this time in Mexico. The shipment of rifles has been stolen, and he is held responsible. Also, a power play between two bothers of the Castro family leaves him caught perilously in the middle.

Returning northward to the border, he encounters Merrill, mortally wounded in skirmishes with a band of Apaches, and what’s left of his company of Buffalo Soldiers, led by their highest ranking officer (Satchel Paige). Mitchum agrees to help them find their way back to Texas. After one of the Castros’ henchmen tries unsuccessfully to kill him, we last see him wading into the river that divides Mexico from Texas.

Women and romance. In the clip below, we see Mitchum and London meeting and talking for the first time. There is awkwardness as she, an officer’s wife, seems clearly attracted to him, and he sizes her up as a woman with what turns out to be a checkered past.

The film invents a relationship between the two that won’t be found in Lea’s novel. There, youthful romance blossoms briefly instead between his protagonist and the daughter of the post’s commanding officer. The darkly troubled emotions that mark the scenes between Mitchum and London find them sharply judgmental of each other. When she professes to love and respect her husband, he calls her a liar. She calls him no better than a hired killer. Eventually, with some bitterness, they part company.

Adaptation. Overall, the film is faithful to the central themes and storyline of the novel. Mitchum, often in big close-ups, captures nicely the weariness and lostness of his character. The conflict at the core of his identity is portrayed visually as his new Texas friends have him bathe, get a haircut, and dress him in western clothes. However, he draws the line at wearing a Stetson and keeps instead his wide-brimmed sombrero. Later, back in Mexico, he is told that if he doesn’t want to be taken as a hated “gringo,” he has to stop dressing like a Texan.

Mexico. There’s a recurrent theme in frontier fiction and westerns that would make an interesting study, and maybe it’s already been done. It involves a journey deep into Mexico, where American characters find themselves in forbidding and dangerous circumstances. The theme itself has connections to ancient myth and legend—Orpheus’s trip to the Underworld, even Dante’s Inferno.

For more recent examples, there is Cormac McCarthy’s All the Pretty Horses and Elmore Leonard’s The Bounty Hunters (reviewed here recently) and westerns like The Wild Bunch and The Professionals. Among earlier writers, you find the theme taken up by Max Brand in South of Rio Grande (reviewed here) and Dane Coolidge’s The Soldier’s Way (reviewed here).

The journey into Mexico is typically a quest that becomes a test of ingenuity and courage, where death lurks in the shadows, often underscored as in this film by reference to the Day of the Dead. Unfamiliar rules apply to human conduct, blood flows easily, and people speak another language. In the end, against the odds, the hero survives to return to the safety of home. Martin Brady, in The Wonderful Country, offers a turn on that theme that resonates with fears about loss of identity and homeland—of being an alien among strangers. His story makes for a very different kind of western.

Wrapping up. Shot in color and widescreen on location in Durango, Mexico, the 98-minute film has elegant footage of desert landscapes that must be striking on the big screen. The only drawback is the noisy and overwrought music track. (The DVD version of the film currently offered for sale has a muddy soundtrack overall.)

The screenplay was written by Robert Ardrey, who has other screen credits, but whose career as a paleontologist produced two popular books in the 1960s, African Genesis and The Territorial Imperative. The director, Robert Parrish, was also responsible for Saddle the Wind (1958), another western with Julie London.
The Wonderful Country is currently available at amazon, and Barnes&Noble. For more Overlooked movies and TV, click over to Todd Mason’s blog, Sweet Freedom.
Tweet