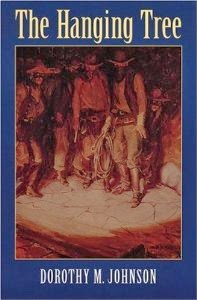 The movie based on this novella would have you believe it’s mainly a story about a mining camp doctor (played by Gary Cooper). However, in her original version, Dorothy Johnson develops more fully the character of Elizabeth, the “lost lady,” who is brought to him for care.

Like Rance Foster, in “The Man Who Shot Liberty Valance,” she is a newcomer in the West, whose introduction to the frontier is violent and shattering. Each is the victim of a stagecoach holdup. Elizabeth’s father is killed, and she nearly perishes of exposure   before being found in the wild.

Both characters face difficulties as they become residents of a frontier settlement. Foster wants to practice law but finds himself in a lawless land, where men settle differences with guns. Elizabeth confronts another kind of obstacle. As a single woman in a mostly male community, she is an object of fascination. Men are both protective and predatory in their regard for her. Without a father, brother, or husband to guard her honor, she risks loss of social approval as a “respectable” woman.

She is befriended by the doctor, Joe Frail, who tends to her recovery and tactfully finds shelter for her in the cabin of another woman, the proprietor of the camp’s restaurant. But tongues will wag, and without her knowledge, she comes to be seen as the doctor’s kept woman. Determined to be self-supporting, she tries to open a school, but not a single mother in the camp will allow her children to have any contact with her.

Themes. What Johnson tackles in The Hanging Tree is the ambiguous role of unattached women in the West. While Doc Frail is granted some liberty to provide for her because of his profession, it is assumed by men and women alike that he takes advantage of their relationship. This is partly due to his reputation as a gambler and gunman. He is no Doc Adams from Gunsmoke. He has killed one man in the past, and some believe that he has killed four. Haunted by his own demons and a guilty belief that he will some day hang for his misdeeds, he carries himself with a degree of arrogance that intimidates others.

For her part, Elizabeth complicates matters by investing in the gold claim of a miner, Frenchy Plante, who has designs on her as well as her money. By chance and against the odds, her investment pays off grandly. Now a wealthy woman, she stirs up envy and ill will, compounded by arrival of a fire and brimstone preacher, who brands her as a fallen woman and calls down the wrath of God, while inciting a mob that gathers at her door. Frail is so alarmed and infuriated that he kills the man. The mob then wastes no time dragging him off to be hanged.

Wrapping up. As in the film, Elizabeth saves Frail’s life by giving away her gold and claims contracts to the rabble eager to see a hanging. “She’s buying her man,” Frenchy Plante cynically observes. And we are left at the end with more of the cold irony Johnson has layered into her story of a woman’s fate where her welfare depends on the good will of strangers in a world corrupted by gold fever.

The Hanging Tree is currently available in print at amazon, Barnes&Noble, Powell’s Books, and AbeBooks. For more of Friday’s Forgotten Books, click on over to Patti Abbott’s blog.