The Legend of the Reno Brothers 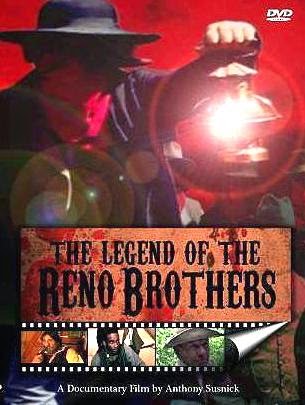 Given the fascination that outlaws hold for Western fans, it’s surprising that so little is known about the Reno Gang. While the stories of the Jameses and Youngers and Billy the Kid are common knowledge, the train robbing Reno brothers of southern Indiana are unknown outside of a couple of Hollywood movies, Rage at Dawn and Love Me Tender, the former a vehicle for Randolph Scott, the latter a showcase for the emerging talent of a singer by the name of Elvis Presley.

As we learn in this recent documentary film from historian David Distler and his colleagues, the Renos are credited with having pulled off the first peacetime train robbery in history. They were also the brains behind a post-Civil War crime wave that ranged over several states and enlisted a band of 100 or more lawbreakers like themselves.

There’s little one can say to romanticize or excuse their often violent and brutal exploits. The Pinkerton agency was hired to bring them under arrest, and the story might have ended there, except that neighboring communities, particularly Seymour, Indiana, took their criminal rampage personally. Abetted by a crusading local newspaperman, they organized a vigilance committee intent on sidestepping due process.


Captured and jailed while awaiting trial, and technically federal prisoners, three of the brothers were taken from their cells one night and hanged by vigilantes. A fourth brother, after escaping to Canada, was extradited, tried, and served time in a U.S. prison. A faithful sister, Laura, lived to mourn their deaths.

Exhibiting few if any redeeming qualities that might capture the imagination, the Renos have been largely forgotten. However, one can easily picture a bloody telling of their tale along the lines of the remake of 3:10 to Yuma. If copies of this documentary pass through enough hands where movie deals are made these days, such an outcome seems not unlikely.

There are countless styles of documentary filmmaking, and this one borrows from several of them. We get talking head historians and commentators, and their enthusiasm for the subject and apparent in-depth knowledge hold a viewer’s interest. They are balanced by reenactments in period dress and a good deal of graphic animation, plus clips from early silent films.

Nonprofessional actors have been cast in all the key roles. They seem comfortable in front of the camera, and the live, color footage complements what is being spoken of in voice over. They evoke an intimacy and realism that compares well with Ken Burns’ style of combining photos with readings from journals, letters, and news accounts.

The only weakness of the film is the enacting of scenes with actual dialogue. These invite comparison with Hollywood and TV performances and direction, and you really need trained actors to bring that off convincingly. For a sample of the film, here is a trailer currently showing on YouTube:

The Legend of the Reno Brothers is currently available on DVD at amazon.

Filmmaker David Distler has generously agreed to spend some time here today to talk about the making of The Legend of the Reno Brothers, and I’m turning the rest of this post over to him.

What posed the biggest challenge in researching, gathering, and organizing the material?
The lack of historical records, beyond the contemporary newspaper accounts, which were generally critical of the Reno family, and objectivity was difficult to obtain. There were only a few books written in the past, and none for many years. The western writers generally ignored the brothers, as they did not fit the Old West template, specifically the locale. As for the two Hollywood movies made, they were nearly useless.

Did you have Ken Burns’ or any other documentary style in mind as you made the film?
Ken Burns’ films are both informative and entertaining. We tried to do both in The Legend of the Reno Brothers with the addition of surreal imagery, not seen in many of his films. We attempted to set it apart from cookie-cutter documentaries and hope the special effects helped achieve this.

The film begins with Laura Reno. Did you consider making the whole film from her point of view?
We would have liked to base more of the movie on Laura Ellen’s perspective, but there is so little known about her other than newspaper accounts that it would have involved a lot of speculation. Laura Goudy, as she came to be known, had no direct descendants that could be found. We are unaware of even any pictures of her that survive. She is still a mystery to many.

Is there any part of the story you weren’t able to include for any reason?
While newspaper editor Jasper Monroe was a key figure in the genesis of the vigilante movement, we would like to have included more details on the Seymour town leaders that actually participated in the murders. This would have certainly stirred up a hornet’s nest as many descendants of them are still in the Seymour, Indiana, area!

To what extent are the Reno brothers remembered today in Indiana?
Almost nothing is taught in Indiana schools about the Reno brothers, despite their being historically significant to the area. There was so much shame and fear at the government and educational levels in Indiana, it still is suppressed or just simply swept under the rug.

The largest newspaper in Indiana, the Indianapolis Star, ran a story recently of the biggest mass murders in Indiana history. They never mentioned the killing of the Reno Gang, which would have been the number one mass murder in the State’s history.

Are there any descendants who have had an interest in the film?
We have been unable to connect or even find any direct descendants of Wilks and Julia Ann Reno, although Wilks did have brothers who settled in southern Indiana. If you follow the Reneau/Reno family line back through Kentucky, several distant relatives have written and commented on how much they enjoyed the film.

How did you go about casting for the film?
Casting the film was a grassroots effort, with family, friends and interested locals all participating in the making of the film. It was felt that the initial story could be told without going through the time and expense of a major search for seasoned actors who didn’t have knowledge of the story.

That being said, now that the film and story have once again been introduced to the public, there are opportunities for something else being done in the future through more traditional filmmaking processes.

Where is the film being shown?
The film has only been shown publicly on two dates. Both were in Scottsburg, Indiana, as part of a fund-raising effort for the local museum. Other than that, the only current outlet for the movie is amazon.com. We have been in talks about preparing an edited version of the 90-minute film for a 60-minute version for airing on PBS.

Many locals had never heard of the Reno brothers and were shocked they had never read about them in school. One of the younger members of the audience was compelled to draw a pencil sketch of the ghosts of the Reno Gang circling around Laura Reno on the back of her completed survey form.

Many people from the town of Seymour in the next county north of Scottsburg wondered why the film was not presented there first. Suffice it to say that some folks from there still want the story to go away, for obvious reasons.

Do you have plans for any other projects?
Hangman's Crossing Productions was formed solely to get the Reno story back into the public domain. Now that that has happened, we believe that there could be follow-on efforts on this true and complex story that has been overlooked by moviemakers and historians for way too many years.

For more of Tuesday's Overlooked Movies and TV, click on over to Todd Mason's blog, Sweet Freedom