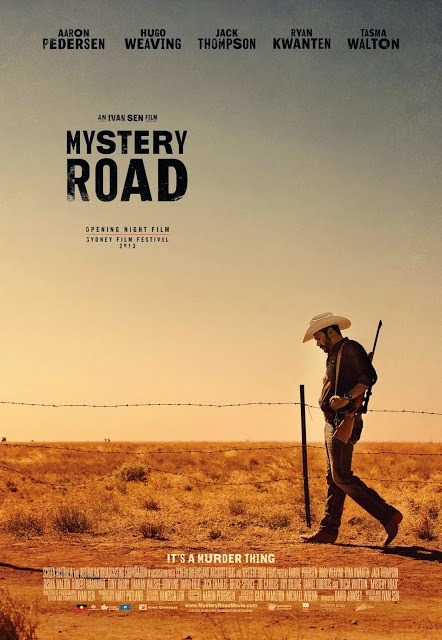 Bit of a switch today. This “western” takes place in the outback of Queensland in modern-day Australia. Its central character is an Aboriginal police detective (Aaron Pedersen) investigating the murder of an indigenous girl whose body is found near a highway used by long-haul truckers.

He gets little cooperation, least of all from his sergeant (Tony Barren) and fellow officers. One of them (Hugo Weaving) seems suspiciously involved in what amounts to a toxic plague of local criminal activity, including teenage prostitution and a meth lab.

Pedersen has returned to home turf after a ten-year absence, making tentative connection with an ex-wife (Tasma Walton) and their daughter (Tricia Whitton). Neither reveal much interest in reconnecting with him. The ex-wife is a drinker; the daughter is clearly in harm’s way.

Home turf for Pedersen is a flat, arid landscape that could pass for West Texas. A drive along the dusty streets of his hometown may take one past scenes of police officers frisking teenagers spread-eagled against fences and cars. Animosity by whites toward Aboriginals is undisguised, as when a ’roo hunter (Ryan Kwanten) greets Pedersen with an icy exchange during a routine call at the young man’s cabin.


Parallels with the traditional western are many in the film, starting with Pedersen’s straw hat, snap-front shirt, sidearm, jeans, and boots. Likewise, he’s a single man working alone to find a killer somewhere along a fine line between whites and indigenous characters in a frontier community, far from civilization.

In the end, as if inspired by Gunfight at the OK Corral, there is a spectacular shootout involving an array of weapons, including powerful long-range hunting rifles, with that heart stopping film effect of impact that follows long seconds of silence after firing (seen before in Quigley Down Under).

A caveat for western fans is the film’s slow pace (2 hours). Many wordless scenes pass as we watch Pedersen in his investigation, often with little indication of what he is looking for or finding. Still, he is a physically commanding presence on screen, with an often-stoic expression; it’s hard to take your eyes off him. Watch him especially—his body language and measured voice—in the high-tension scene with Kwanten.

Part of the film’s length owes to its almost documentary-style portrayal, of the social and economic conditions where its story takes place. As a result, secondary characters are often played with notable depth, especially the heartbreaking performance of Tasma Walton and the animated role of Old Boy (Jack Charles), as an old-timer observer of the disintegration of his tribal community. Here is a trailer for the film:

Mystery Road is currently available at Netflix and on DVD and streaming video at amazon and Barnes&Noble. For more of Tuesday's Overlooked Movies, click on over to Todd Mason's blog, Sweet Freedom.

Further reading/viewing:
BITS review of Quigley Down Under