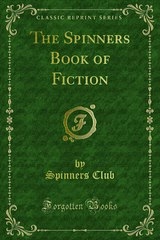 Living in San Francisco at the time of the 1906 earthquake, Ina Coolbrith (1841–1928) lost her home and a priceless personal library in the fire that consumed the city. With her interest in the arts and her connections in both San Francisco and New York, she had helped found the Overland Monthly with Bret Harte and encouraged the careers of Jack London and Isadora Duncan among many others.

Following the quake and fire, Coolbrith's friends, including California writer Gertrude Atherton, helped out with financial support. A collection of stories, The Spinners’ Book of Fiction was published with all proceeds to go to Coolbrith. Sixteen Bay Area writers contributed to the anthology, as well as several illustrators and artists.

Here are a few samples:


Mary Austin, “The Ford of Crevecouer.” Told in French-accented English, this story is the confession of a sheepherder who allows a rival sheepherder to drown in a treacherous river crossing, believing the man to be possessed by the Devil.

Mary Hallock Foote, “Gideon’s Knock.” This is a ghost story told by a mining company employee to a new arrival at the camp who wants to know why visitors are not permitted to enter the manager’s house by the front door. Foote does a nice job of evoking a spooky atmosphere for this one:

It was the last week in January; there had been much rain already for the foot-hills. Wet sprays from the untrimmed rose hedges disputed my passage through the inner gate. Discolored pine-needles lay in sodden drifts on the neglected grass. The hydrant leaked frozen puddles down the brick-paved walk.

Eleanor Gates, “Yellow Man and a White.” At a time when white mistrust of Chinese immigrants on the West Coast was rife, Gates tells a story with a sympathetic portrayal of a Chinese man possessing knowledge of the medicinal properties of roots and herbs. He first treats a white woman who has been thrown from a horse. Not long after, he returns her opium-addicted husband to health.

Jack London, “The League of Old Men.” London, who had adopted Darwinian notions of the survival of the fittest, tells a compelling story illuminated by an ironic observation—that by rights, the tribal populations of the far north were better fitted to survival, but succumbed mysteriously to the corruptive influences of whites.

In a confession, told through an interpreter, a native describes killing many white intruders on his tribal lands and reveals that he is the last of his people to remain alive. London ends with a grimly bruising image of white ascendancy, as it is revealed to the judge who has heard the native’s testimony:

All his race rose beforehand in a mighty phantasmagoria—his steel-shod, mail-clad race, the law-giver and and world-maker among the families of men. He saw it dawn red-flickering across the dark forests and sullen seas; he saw it blaze, bloody and red, to full and triumphant noon; and down the shaded slope he saw the blood-red sands dropping into night. And through it all he observed the Law, pitiless and potent, ever unswerving and ever ordaining, greater than the motes of men who fulfilled it or were crushed by it.

Frank Norris, “A Lost Story.” Finally, in this sly tale, a woman with literary aspirations works for a small New York book publisher as a reader of unsolicited manuscripts. When a sickly young man brings her his novel to consider for publication, she discovers that it’s on a subject she has long planned to write about herself—and it is far superior to what she herself might have written.

Torn by an impulse to reject the novel, she puts off making a decision, weighing the pros and cons. It’s an O. Henry situation, but the resolution is far more darkly ironic than what it might have been in O. Henry’s hands.

The Spinners’ Book of Fiction is currently available online at gutenberg.org and Internet Archive. For more of Friday's Forgotten Books, click on over to Todd Mason's blog, Sweet Freedom.
Tweet