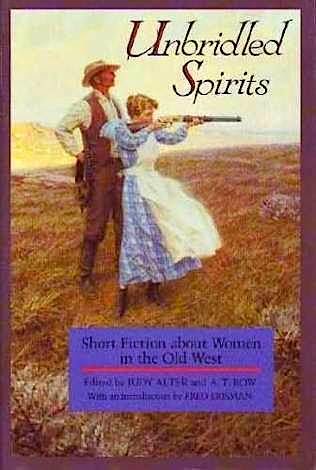 This anthology is not quite the book I expected. Subtitled Short Fiction about Women in the Old West, it leads the reader to expect stories written by women, and a wide selection of them. But besides those writers most easily named (Mary Hallock Foote, Willa Cather, Mari Sandoz, Mary Austin, and Dorothy Johnson), there are almost no women whose fiction would surely qualify them for inclusion here.

Instead, the editors find room for one of their own stories (Alter’s “Fool Girl”) and beef up the rest of the book with stories by male writers, which happen to include female characters. These are actually okay, especially Elmer Kelton’s “The Last Indian Fight in Kerr County,” Owen Wister’s “Hank’s Woman,” and Elmore Leonard’s “The Tonto Woman,” but they hardly help showcase the generally under-appreciated work of the many women who have taken pen in hand to tell their own stories of the Old West.

Alter and Row may argue that women writers have left too little to choose from in short form fiction, which is their chosen scope for their anthology. I’d argue that a wide reading of novels would have produced many worthy excerpts from them that would fairly represent the field and reintroduce forgotten writers to a modern audience. That job, alas, has been left to someone else.

First published in 1994 by Texas Christian University Press, Unbridled Spirits is currently available in paperback at amazon, Barnes&Noble, and AbeBooks. For more of Friday's Forgotten Books, click over to Patti Abbott's blog.
Tweet