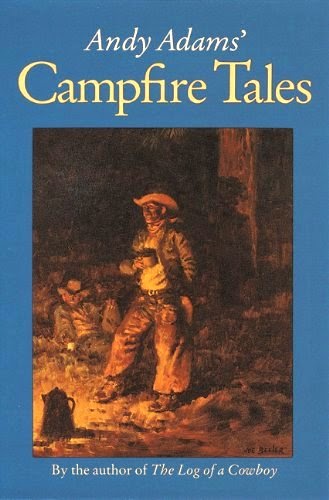 By the rules of trail drive storytelling, they are factual, as actually happened, and without exaggeration. Storytellers were not allowed to be boastful or to be interrupted.

The collection makes for an entertaining read, as subject matter ranges over all sorts of topics, and stories are told with a certain cowboy attitude that brings them to colorful life.

Among a few of my own favorites: 1) an account of a marathon of “bear sign” (i.e., doughnut) making, 2) Bat Masterson supervising a fractious crowd gathered for a public speaking event, 3) a case brought before Judge Roy Bean, 4) an explanation for why the Chisholm Trail forks as told to a gullible new man, and 5) a dispute between a disagreeable trail boss and his riders over the count of a herd.

First published in 1956 by the University of Texas Press, Andy Adams’ Campfire Tales was reissued in 1976 by the University of Nebraska Press, with an expanded and informative introduction. The book is currently available at amazon, Barnes&Noble, and AbeBooks. For more of Friday’s Forgotten Books, click on over to Patti Abbott’s blog.
Tweet