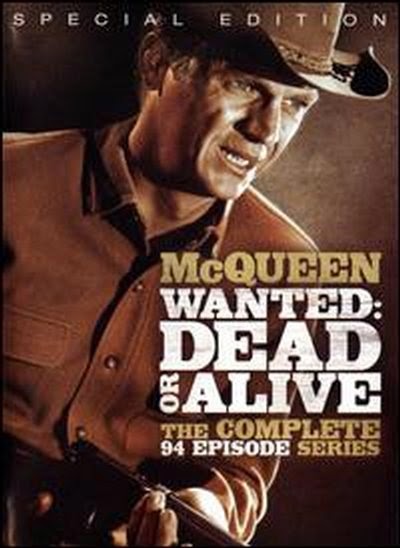 In 1958, Steve McQueen emerged after some minor TV work to star in three seasons (94 episodes) of the CBS TV series, Wanted: Dead or Alive. There he developed the screen presence we came to expect of him in one dramatic role after another, from The Magnificent Seven (1960) to Junior Bonner (1972) and a final western, Tom Horn (1980).

Readers here may remember that, among western actors, Randolph Scott is a favorite of mine, but Steve McQueen is a close second. It may be that the two of them have some things in common—not the least of which is a particular brand of coolness in their style. Physically they are obviously different. Scott is tall and lean and carries himself with what you could even call elegance. McQueen is shorter, with a compact build. When he walks, he strides.

Yet watch their faces, and you get that same impassiveness. Both are clearly thinking, but giving away nothing. What’s registering in the neurons up there is a kind of high-speed calculation that is more than one step head of everyone else in a scene.

Both actors portray a form of higher intelligence that may leave you a little chilled, and then surprise you with a softening warm and disarming smile, the mask abruptly drawn aside. Many western movie stars could do one or the other (Wayne’s easy and congenial smile warms me just about every time), but not both.

What to look for. McQueen’s performance as Josh Randall, bounty hunter, was well suited to the small black-and-white, standard ratio screen. He fits nicely into the tight confines of the 30-minute TV episode, where stories are told at a rapid clip and suspense is punctuated with bursts of action.

The first episode of the series is economically told and the characters clearly drawn. You will see some familiar faces, including Michael Landon and Nick Adams as brother outlaws. There’s a gesture at realism in the opening scene (below) as the streets of a frontier town are swept with wind-driven dust. The soundtrack music is dramatic and almost martial as McQueen is introduced, the camera focusing on the shortened Winchester carbine he carries on his hip.

Later, in a more relaxed scene, McQueen finds the sister of the two brothers, gathering eggs from the nests of chickens in a barn. His shadow first appears on the wall behind her, and the scene that unfolds between them reveals a tenderness in McQueen’s character we have not seen until now.

After dispatching the two outlaws, who each attempt to kill him themselves, Randall reveals again the tender heart that beats in his chest. Collecting the reward money, he hands back a fistful of bills, to be given anonymously to the widow of the marshal who has died in the opening scene.

This would become Randall’s trademark as a bounty hunter, confirming him as a caring and generous man, not simply someone able to kill in cold blood, which is how he would be portrayed today. The scene is a reminder of a less cynical time that believed lethal violence did not have an adverse effect on those who used it in the service of justice. Although you could argue, I guess, that Raylin Givens in the pretty cynical series Justified seems to be similarly untouched by it. (So I may have to take that back.)

Wanted: Dead or Alive is currently available at amazon and Barnes&Noble. For more of Tuesday’s Overlooked movies and TV, click on over to Todd Mason’s blog, Sweet Freedom.
Tweet