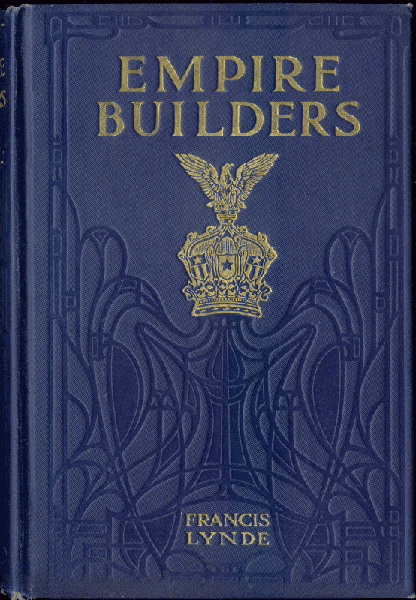 There are train spotters and railroad enthusiasts, but so far as I know, no one today writes fiction for this particular market. Anyway, not since Agatha Christie’s Murder on the Orient Express (1933). Travel by railway was still novel enough at the turn of the last century, however, to keep writers like Francis Lynde (1856–1930) selling books with plots about railroading.

This one is typical of his others and concerns a young superintendent of a line running from Denver into the Rocky Mountains. Stuart Ford is an ambitious fellow, who hatches a plan to extend the line to eventually connect Chicago and the West Coast. His chief competitor is the Transcontinental with its eye on hauling freight to and from the same regions of the West, profiting from the mining and crop-raising industries. In other words, there is a lot of money to be made for the railroad that can first lay its tracks there.


Plot. Ford’s main difficulties, though, are right there in the company that owns and operates the railway he’s hoping to expand. First he has to persuade the line’s Board of Directors that they should invest in his scheme. Then he has to outwit an immediate superior, General Manager North, who doesn’t like Ford and sabotages his efforts.

Ford is not without friends, however. He gets help from Charles Edward Adair, a wealthy nephew of the Board of Directors’ stubbornly crotchety chairman, Sidney Colbrith. And then there is Adair’s pretty sister, Alicia. Both coach Ford on how to deal with their Uncle Sidney and how to take advantage of the political factions on the Board. Adair’s wealth also comes into play.

The plot thickens as money, politics, corporate greed, graft, espionage, and stock market manipulation complicate Ford’s efforts. Suspense builds on several levels as Ford and his handful of allies work to outmaneuver their rivals and the unpredictable Uncle Sidney.

Women and romance. Lynde, as we see in this and an earlier novel, The Grafters (1904), is especially adept at creating interesting women characters. They are intelligent, clever, and sharp-witted. They more than hold their own in dealings with men. Born into genteel society at a time when women were expected to be no more than pretty and gracefully empty-headed, his women must hide their intelligence and exercise diplomacy in making their opinions known.

You admire their ability to bring this off, while artfully nurturing the growing interest of a worthy and honorable mate—in this case Stuart Ford­—without seeming to. Romance actually plays little more than a leitmotif in the novel. The real action is about youthful ambition and opening new markets (building empires) with capital investment, foresight, and honest business practices. They don’t write novels quite like this anymore.

Wrapping up. Francis Lynde was a prolific writer, with short fiction appearing in magazines like Munsey’s as early as 1894. In 1904 he began a long relationship with The Popular Magazine, and in a lifetime career as a writer, he published over two dozen novels and well over 100 works of short fiction and serials. During the Silent Era, three of his stories were adapted to film.

Born in New York, Lynde attended public school in Missouri and went on to study literature at the University of the South in Sewanee, Tennessee. A biographical piece in a 1917 issue of The Rotarian describes him as having lived “about half of his life in the West,” settling in Chattanooga after 17 years of railroading, most of that time as an employee of the Union Pacific.

Empire Builders is currently available online at google books and Internet Archive and in paper and ebook formats at amazon, Barnes&Noble, and AbeBooks.

Shameless plug: For an in-depth analysis of Francis Lynde’s The Grafters (1904) and a survey of his contemporaries as writers of frontier fiction, read How the West Was Written (click here for details).
Tweet

Image credits: Illustrations from the novel by Jay Hambidge