Geoff Dyer, But Beautiful: A Book About Jazz 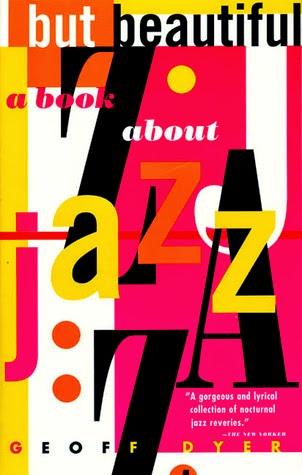 I guess you’d call this creative nonfiction. A former colleague recommended this book to me after reading some of my thoughts on the life-affirming and health-inducing aspects of listening to jazz as I deal with a visitation of brain cancer. The great irony is that the joyous practice of improvisation in smoky clubs of the bebop era was so virulently self-destructive for its musicians.

In Dyer’s evocative and impressionistic character sketches of several of its iconic figures (Lester Young, Bud Powell, Chet Baker, Art Pepper, Ben Webster, Thelonious Monk, Charles Mingus) we witness mostly downward trajectories, as drugs, prison, racism, alcoholism, mental illness, and violence take their toll. Whether or not you think of them as survivors, you come to understand that the music they invented and played was an act of defiance and subversion in the face of demons both internal and external.

I don’t want this to sound over dramatized. Dyer immerses the reader in an imagined subjective world of each musician, and that world is seldom as harrowing as it appears from outside. Like some, Lester Young floats in the isolation of an alcohol haze, never quite sure if he is living or already dead. Thelonious Monk glories in an ongoing rage against fellow musicians and the instrument he plays.

Meanwhile, some escape to Europe, where they find an appreciative audience and are granted a reprieve from the vestiges of Jim Crow discrimination. If anyone fares badly in the book, it is Chet Baker, who is portrayed musically as someone whose seductiveness as a performer was always in the form of promises he never kept—a self-absorption that verged on coitus interruptus.

Dyer bases his book on biographical and historical accounts, but is more interested in impressions than facts. The end result is a cross between dream and documentary. While representing jazz composition and performance as driven by the effort to capture evanescent and transcendent moods (think of Duke Ellington’s “Mood Indigo”), Dyer’s lucidly clear prose is a wonder of poetic expression.

He closes the book with a stimulating essay on mid-century jazz, with an overview of the wave of high-profile jazz musicians who followed in the decades since (e.g., Miles Davis, Keith Jarrett), while illuminating some of the key issues that have animated the discourse of musicologists who have never lost their love for the genre. There is also a discography and a lengthy bibliography.

But Beautiful is currently available in print and ebook formats at amazon, Barnes&Noble, and AbeBooks. For more of Friday's Forgotten Books, click on over to Patti Abbott's blog.
Tweet