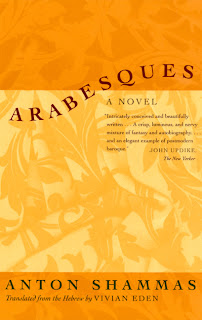 This goes back to a Middle Eastern fiction marathon of mine a few years ago. It's a celebration of storytelling itself, as a free-associating narrator weaves together an intricate pattern of stories that make up three generations of family history. The overall narrative jumps backward and forward in time, making connections between incidents and people across decades. Meanwhile, 20th century history is rapidly redrawing the map where it all takes place - its Arab Christian characters inhabiting a village that finds itself after 1948 part of the new state of Israel.

Playfully postmodern, the author is a character in his own fiction and the narrative itself shifts among several styles and structures, including don't-trust-the-narrator flights of fancy. A meeting described in detail is then revealed not to have happened, and then a hundred pages later is reported again as actually happening - in exactly the same detail. Another key scene, involving an attempted suicide, is broken into fragments scattered throughout the novel like jigsaw puzzle pieces for the reader to assemble. Scenes are told and retold from different points of view.

The personal stream-of-conscious reminiscence of the opening 73 pages turns suddenly into a section of seemingly unconnected vignettes taking place in Paris. Later the narrator becomes part of a gathering of international writers at the University of Iowa, where an actual Norwegian author, Bjørg Vik, appears as a character, and an unflattering portrayal of another writer, Yehoshua Bar-On, suggests parallels with Israeli novelist A. B. Yehoshua. Like its playful title, the book has its fun, while representing on another level a perfectly sobering portrayal of lives lived in spite of adversities, personal misfortune, and the grinding wheels of history.

First published in Hebrew in 1986, Arabesques has been lovingly translated. It's available at amazon and AbeBooks. Friday's Forgotten Books is the bright idea of Patti Abbott over at pattinase.

Coming up: Gwendolen Overton, The Heritage of Unrest (1901)
Posted by Ron Scheer at 6:00 AM