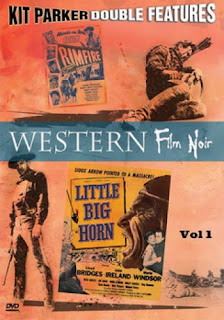 This B-western gets a B+ for its sheer ambition. Not satisfied with being an energetic spin on every western cliché, it borrows some from a couple other genres, too. Besides hold-ups, barroom brawls, and a hanging, there’s music, comedy, a sultry saloon girl, and a ghost, all for the price of a single admission.

In 1949, it’s exactly what would have shown second in a double feature at the Island Theatre in Grand Island, Nebraska, where I grew up—and probably on the Tuesday-Wednesday-Thursday bill, as the program changed there twice a week. And only a walking encyclopedia of movie and TV trivia would recognize the names of the Hollywood veterans responsible for this one.

Plot. Our hero, played by James Millican, stops a stage robbery in the first scene, and while the robbers make off with a box of gold bullion, he saves the passengers from further insult. They include a tall, sleek gambler (Reed Hadley), who goes by the name of the Abilene Kid, and a pretty blonde girl named Polly (Mary Beth Hughes), daughter of the sheriff in nearby Stringtown, New Mexico.
For his efforts, Millican is taken on as a deputy sheriff in Stringtown, and we learn that the saloon owner’s goons have robbed the stagecoach. A dispute over a card game ignites the afore-mentioned barroom brawl, after which the Abilene Kid is arrested for cheating with a marked deck.
It’s apparently a hanging offense in Stringtown, and the Kid is tried and found guilty by a show of hands. Justice is swift and he is hanged the next morning, proclaiming his innocence. Soon after, a mysterious series of deaths occurs, the killer leaving behind a playing card starting with the deuce of spades and working his way up through the suit. Suspicion points to the dead gambler.
By the time we get to the face cards, the newspaper has already been printing scare headlines about a “ghost killer.” People have begun to leave town, but to no avail. The sheriff and his new deputy puzzle over the clues, while the saloon girl and Polly, the sheriff’s daughter, take an interest in the deputy.
Unencumbered by anything but unadulterated regard for the opposite sex, the deputy calmly resists the steamy advances of the saloon girl but gets tongue-tied around the pretty Polly. Before the town’s population is reduced to zero, he discovers the stolen gold, solves the mystery, and gets over his girl troubles.
Added value. Comic actor Fuzzy Knight plays several scenes of buffoonery with Chris-Pin Martin as a stereotype Mexican. Fuzzy takes a turn at the piano in the saloon and belts out a rendition of “Bad Old Stagger Lee.” When there’s news that Ulysses S. Grant, a Republican, has been elected president, he looks into the camera and says, “I never knew there was anything except Democrats.”
Camera work and editing deserve mention. The opening sequence grabs you with a stagecoach at full gallop being pursued by four men on horses with guns. The title RIMFIRE appears on the screen, and the letters are blown to bits, each by a single gunshot.
Much in the style of early television, when TV screens were small and tight close-ups became common, the film lets us get a good look at faces. At the hanging, which has drawn a crowd, the scene cuts from one close-up to another, capturing reaction shots. Then the camera slowly pans across them while the Abilene Kid makes his final speech.
Minor characters have moments that fix them clearly in the imagination. The newspaper editor has a prickly disposition, muttering "Law and order" in a scornful tone after the trial. The judge himself is a gruff man obviously impatient with the ignorance of the town's residents.
Altogether, director B. Reeves Eason has whipped together an action-packed 63 minutes of western excitement. The film has been released on DVD as a double feature of “western film noir” with Little Big Horn (1951) starring Lloyd Bridges. Tuesday’s Overlooked Movies is the much-appreciated effort of Todd Mason over at Sweet Freedom.
Coming up: Dagoberto Gilb, The Magic of Blood
Posted by Ron Scheer at 6:00 AM