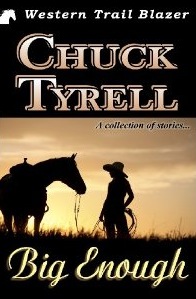 Western writer Charles Whipple, writing as Chuck Tyrell, has a new collection of stories—mostly fiction, some nonfiction. They are an entertaining mix of genres, ranging from traditional and historical westerns to noir and memoir, plus excerpts from two novels. The title story is about a horse and the young rider patiently gentling it, until strangers arrive who happen to be a step or two ahead of the law.


If you’ve read much about the Old West and Charles’ home state Arizona, you quickly sense the historical grounding of his stories, and you know you're in good hands. Compared to the writing of those who know the West only from other western novels and the movies, he gives you two or three more layers of detail. You might call it “high definition.”

His men may be good with a gun, but they prove their mettle in other ways, too. In “Man of Iron,” the narrator discovers that he has shot an Apache woman with a newborn child. Never mind that she’s tried to kill him herself. He makes a superhuman effort to return her to her tribe.

A Japanese man schooled in centuries-old martial arts has come West to avenge the death of his father in “Kataki.” He finds his way into the fiercely defended stronghold of a desperado in Mexico and doesn’t need a gun at all.

Meanwhile, Tyrell has a special way with lawmen. They step off the page with well-defined features and temperament. In “The Kid and the Commodore,” the historic lawman Commodore Perry Owens offers an absorbing portrayal of the man who played a key role in the Pleasant Valley range war during the 1880s in Arizona.

Tyrell’s Marshal Havelock, notably in the collection’s excerpt from the novel Vulture Gold, is a clear-thinking man of action. He gets the job done, even with the help of those who question his authority because of his mixed race. Just watch how he calmly manages a posse while in pursuit of two robbers of gold bullion. 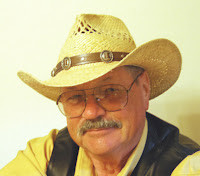 I’ve asked Charles if he would consent to an interview about Big Enough here at BITS, and he’s happily agreed to answer a few questions. Here he is:

Charles, the stories in Big Enough are each different in tone, subject matter, and the way they are told. What would you say is the storyteller’s thread that runs through all of them?
If there is a thread, it's me. Born and raised in Arizona high country on the flanks of the White Mountains only 19 miles from the real Fort Apache (which looks nothing like the Fort Apache in John Ford's movie). I grew up on stories of the "pioneers." There was even a shootout in my home town of Show Low when I was in the third grade. I didn't see it, of course, but that's how close the "Old West" was.

Which of the stories’ narrators do you feel as closest to yourself?
None are really me. Call me mystic if you like, but it seems the characters take on a life and intent of their own as the story goes on. Often they'll get into scrapes or say things that completely surprise me. A friend and beta reader of mine and I have a friendly banter going on. "Wonder what (name of protag) will tell you today?" At the end of the day's writing, I give the reader a paragraph or two of what the character has told me.

Were you aware when you chose the title for the collection that Will James also used it for a novel about a horse?
You know, I didn't. And Will James wrote the first book I remember reading, which was Smokey. The real Big Enough may have been named for James's book. He was a small two-color black-and-white paint that my uncle owned. That name fit the little black filly in the story (she had another name at first) so she got the name. The working title of the story was “Kid McCullough.”

Early western writers, 100 years ago, rarely specified the make and caliber of firearms used by characters. How do you account for the focus on that in today’s westerns?
I think today's writers are trying to be more realistic, and I think the reader of westerns tends to look for more specific details of that kind that perhaps the readers did a century ago. Another reason might be because we are farther away in time.

A hundred years ago, the reader might have been much more familiar with firearms than we are, or the opposite, perhaps there was not a fetish, if you will, about firearms. Still, being specific about firearms today is the mark of an author who does his homework. More than a few, I'd imagine, have been out to the firing range to shoot black powered firearms just to see what it's like.

To what extent do you think of the Arizona Old West as having a particular character and identity all its own?
Dunno. Arizona didn't have rangers until 1904. It was not settled as quickly, perhaps, as other "western" states. The famed Hashknife Outfit didn't come in until the 1880s. Commodore Owens's gunfight with Andy Cooper and the Blevins Gang happened in 1887. OK Corral, if I'm not mistaken, was 1881. That's a long time after the rowdy days of cattle drives from Texas to Kansas.
Way after the California Gold Rush, Alder Gulch, Deadwood, and so on. Arizona for years was the "baby state" so I reckon westerns set in Arizona may be of a later day and age. Also, as with the Hashknife Outfit, many of the elements that caused "trouble" in Arizona came from states to the east either with a price on their heads or with the desire to get out of civilization's way.
In your story “Man of Iron” a man’s superhuman effort to save the life of an Indian woman raises the topic of frontier race relations in a compelling way. Would a man like this have been one in a hundred, or even one in a thousand?
You know, I can't answer that question. He found the woman and the story developed from that. This often happens with me. An opening situation will present itself and the characters do their own thing from that point on. Masai (Massai) is historical, as is the stage station, but whether a white man would do that for an Indian "squaw," I have no idea.

Actually, the "man of iron" name came from Commodore Perry Owens, given to him by the Navahos, because they couldn't believe they missed him all the time, so he had to have an iron body that bullets ricocheted from. The name of the hero's horse, Pocoueno, is also one of the crowbaits that we had in my youth. He was a big brown horse with black mane and tail. Probably sixteen and a half hands high.

“The Kid and the Commodore” is based on lawman Commodore Perry Owens. How much of that story is a matter of record and how much is your invention?
It's as close to what happened as I could make it. All the dialogue came from written sources. I have a file two inches thick, not counting books, on Commodore Perry Owens. My story is much closer to what actually happened than Clair Huffaker's is. Take the opening scene. I know the bluff where Commodore sat his horse. I know the color of the Little Colorado. I've seen the willows. I know what you can see of the Painted Desert. And I knew Owens came with the warrant from Taylor in his pocket.


“Line Rider” takes some unexpected turns. Without giving them away, can you say how that story came into being?
I've never been a line rider, but I imagine it was a very lonely existence. My story kind of takes some of the loneliness out of the job, maybe.

You have introduced a Japanese character into one story, “Kataki”—and quite plausibly. Have you done this before and would you like to do more of it?
In The Snake Den, which won the 2011 Global eBook Award in western fiction, the protagonist, a boy of 14, turns to an Oriental inmate (yes there were "chinamen" in Yuma prison), his cellmate, actually, for help. This Oriental was in actuality from the Ryukyu Kingdom (Okinawa), which is where karate was developed. Later, the Japanese appropriated the martial art and changed its name, but in this story, the Okinawa teaches Shawn Brodie the basics of karate, which has much to do with his ultimate pardon. [The Snake Den is currently available for kindle at amazon. -Ed.]
When the call went out from Western Fictioneers for stories, I didn't want something ordinary. I remembered Red Sun, with Toshiro Mifune and Charles Bronson (Alain Delon was in it too), and thought I could make something a bit more realistic. There actually was a delegation from the Shogun to Washington in 1860, but it came nowhere near El Paso. Such is fiction.

The ninja stuff is as close as I could come. There are videos of swordsmen cutting bullets in two on YouTube. It can be done. Dress and manners and so on are as close to what I think might have happened as possible. Both Kensington St. George and Johnny Havelock have appeared in my fiction before. The young Japanese man Kay (actually it would be spelled Kei in romanized Japanese, but as the storyteller is not Japanese I spelled it as he would have heard it) is new.

Actually, I'm writing a fantasy saga set in an alternative of ancient Japan, alternative in that all the mythical creatures are real. The first novella of the series, The Fall of Awa, is available online. Very Japanese, but the word "Japan" never occurs.

You live in Japan. Is there a Japanese audience for your stories, and how well do they translate?
The hardest thing I ever did was translate The Prodigal into Japanese. Then my wife, who writes advertising copy in Japanese, went after it with a blue pencil and wow, makes it difficult to try another translation. [The Prodigal is currently available for kindle and the nook. -Ed.]

That said, I belong to a group called Western Union. We meet four times a year and exchange tall tales. They're fans of things western, but the biggest fiction items are movies. There is not a big market for western fiction here. Wyatt Earp has a following and there's one nonfiction writer who has made a living out of Earp books. I've not gotten into them.

The cover of Big Enough is appealing and effecitve. Can you tell us a bit about the creative decisions that went into it?
Well, I went to iStockPhoto and hunted for pictures with Girl and Horse. As I remember, I went through several searches before I found this one. To me, it portrays the love Kimberly had for Big Enough and the affection the horse had for her. The cover itself was done by Laura Shinn, who's been better than good for many who publish with Western Trail Blazer.

Actually, if you go to the Web and search for what you want in the photo--for instance, I recently did a search for "crying abused women," as the subject of the book is rape, recovery, and redemption. I input that to Google and told it to find me images. If you find the right one, it will take you back to where you can buy it. Probably more than you ever wanted to know about covers.

Anything I haven't asked you'd like to comment on?
I personally feel that setting is vital to westerns. I'm judging short stories at the moment for Western Fictioneers Peacemaker awards. A few really know the country. I can tell. Readers can tell, I think.

Thanks for the chat.