Gwendolen Overton, The Heritage of Unrest (1901) 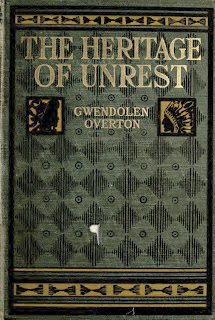 This darkly brooding novel is a plague-on-all-your-houses account of the Indian Wars in Arizona, 1878-1885. There are three characters at the center of a complex plot: Felipa, a young, mixed-race woman with a Mescalero mother and cavalryman father; Landor, an officer in the U.S. Army; and Cairness, an Army scout, born of English convicts in Australia. Around them swirl a bloody swath of frontier history as Geronimo and his Apache followers go on the warpath.