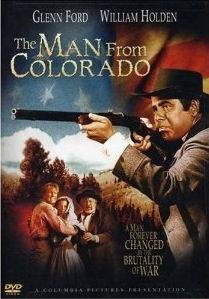 This late 1940s western is suspicious evidence of commies at work in Hollywood. After serving as soldiers in the cavalry, Civil War veterans in this story find their gold prospecting claims lost to a big mining corporation. The owner is a hard-nosed capitalist, protected by the law, who agrees to let them work for him—but at slave wages. Several of the men angrily turn outlaw.

Caught in the middle are two men, both former Army officers, one a colonel (Glenn Ford) and the other a captain (William Holden). Ford has agreed to serve his hometown as a federal judge, and he appoints Holden as federal marshal. In another western, justice would eventually prevail and the rights of working men who had served their country would be honored.
But there’s a problem. Ford’s mental health has been compromised by his war years. In the opening scene, we see him ignore a white flag of surrender and order the bombardment of 100 Confederate soldiers. From the demented look on his face, we know he’s gone off the deep end.
Plot. Long friends, Ford and Holden each have their eye on the fetching Ellen Drew at war’s end. Gallant and agreeable, Holden gracefully steps aside when she decides to marry Ford. But a rift slowly develops between the two men as Ford becomes gradually more unhinged.
When the miners bring their grievances to court, Ford acting as judge, upholds the letter of the law, which favors the mining corporation. Matters escalate as two men once under Ford’s command take a gold shipment in a holdup, and one of them is captured and hanged.
A gang then forms around the surviving robber, Jericho (played by James Millican, the lawman and hero of last week’s Rimfire). They stage another armed robbery directly from the mining company’s vault, which results in the death of a company guard. The company owner, Big Ed Carter (Ray Collins), is unsatisfied by Ford’s failure to protect his interests.
Determined to see men hang, Ford strings up Jericho’s young brother, then attempts to execute several other miners, who are rescued by the gang even as the nooses are around their necks. Convinced that Ford is now off his rocker, Holden tries to contain him. But Ford sees Holden’s efforts as the betrayal of a man who secretly wants to take away his wife. He throws Holden in jail.
By now Drew has found her husband’s diary, into which he’s been pouring his tormented thoughts. With the help of the town doctor (Edgar Buchanan), they spring Holden from jail, and in their flight from town Holden takes a slug in the shoulder from the enraged Ford.
All converge on a mining camp, which Ford’s men set on fire. Ford, Holden, Jericho, and Drew meet in the street as flames rage around them. When it’s all over, Ford and Jericho have been dispatched by a collapsing building, and in a brief final scene, Holden is off to Washington to get justice for the miners, while Drew is part of the crowd of well-wishers.
Themes. This is an entertaining and well-acted film, with several exciting action sequences. The post-war theme of combat soldiers returning to uncertain civilian lives is prominent, and the portrayal of big business indifferent to their welfare is another. “They’re veterans,” Carter complains, “so they can get away with anything.”
In defense of the men, Holden argues that they did not get a fair break. He blames Carter for making outlaws of them by his own greed and lack of concern for the working class. You can feel the attention of the HUAC harking westward at the sound of movie dialogue of this caliber. And it’s probably not a surprise that screenwriter Ben Maddow came to be one of the Hollywood blacklisted in the 1950s.
Another dimension of the story, unusual for a 1940s western, is the treatment of combat-related psychological disorders. Ford’s character seems to have lost all regard for human life. His condition is not what we’d recognize today as PTSD. He seems simply to have gone over to the dark side, and we’re led to believe that the war has made of him a cold-blooded murderer. Whether that’s rooted in any understanding of the psychological impact of actual combat is hard to say.
Wrapping up. While set entirely in Colorado, the film was shot in southern California, on ranches in Simi Valley and Chatsworth. It lacks the raw beauty of the Rockies as a backdrop, but the warm Technicolor does a lot to compensate for that. It’s a little odd seeing the usually amiable Glenn Ford in a villain’s role, but he musters a steely look in some scenes that is pretty convincing.
The Man From Colorado is currently available at amazon and netflix. Tuesday’s Overlooked Movies is the much-appreciated enterprise of Todd Mason over at Sweet Freedom.
Source: imdb.com
Photo credits: Wikimedia Commons
Coming up: Emma Ghent Curtis, The Fate of a Fool (1888)
Posted by Ron Scheer at 6:00 AM