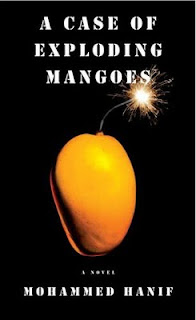 I kept being reminded of Catch-22 as I read this sharply satiric novel of political conspiracy and life in the military, published in 2008. Author Hanif's achievement is his ability to tell a story grounded in the history of a culture still foreign to Western readers that's as easy to appreciate as Heller's classic anti-war novel. For me, the laughs kept coming no matter what, even when the humor was so dark I didn't want to believe it could be based on what really happens in this cockeyed and benighted world.

The book begins with a fast forward to its ending — the crash in 1988 of an airplane carrying Pakistani dictator General Zia, taking the lives of all on board, including several high-ranking military officials. Hanif then interweaves a number of entertainingly far-fetched plots, all of them contributing to not one but several conspiracies to assassinate Zia — and all of them converging on that fateful flight.

What's exhilarating is the freedom Hanif takes in his rendering of the real-life characters. All of them are portrayed as more-or-less hapless clowns in a grand-scale collision of hubris, ambitions, ignorance, paranoia, and professional jealousies. And you realize that in a media-dominated age, where most of what we know about public figures is PR, spin, hype, and rumor anyway, a novelist is pretty much free to invent his own characterizations of them.

You can fault the book for its length, its occasional wandering off-course, and its lack of historical accuracy, but it is no more than what it sets out to be. The novel is a wild ride that attempts to reflect the absurdity of human behavior when what's at stake are positions of power and the vast sums of money that power attracts to itself.

A Case of Exploding Mangoes is currently available at amazon, AbeBooks, and for kindle and the nook. Friday's Forgotten Books is the bright idea of Patti Abbott over at pattinase.