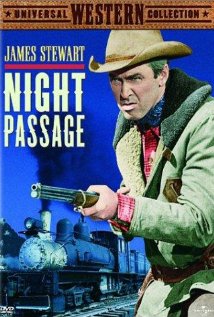 This is one of those movies that make you want to read the novel it was based on. Western writer Norman A. Fox wrote Night Passage in 1956 and it was made into a movie the following year. Shot in a widescreen process called Technirama, its location photography in the mountains of Colorado and central California is impressive. Chiefly a railroad western, it makes dramatic use of the Durango & Silverton narrow gauge railway.

Plot. The plot involves a pair of brothers. The older one is out of work and making a living as an itinerant musician, and the other runs with a gang of train robbers. James Stewart plays the musician, with accordion in tow, and Audie Murphy is the amiable “Utica Kid,” who has gone over to the dark side.
Quite a number of secondary characters add to the complexity of the plot. Dan Duryea gets third billing as the loud-mouthed leader of the gang. There’s a café waitress (Diane Foster) in love with Murphy, and a former girlfriend of Stewart, who is now the wife of the railroad owner. Brandon DeWilde is a young teenager who has fallen in with the gang. Jack Elam is one of the more sinister gang members.
The curious title (more appropriate for a noir film) seems to refer to a long nighttime scene in which all of the above characters converge in a ghost town saloon. The gang has taken the railroad owner’s wife hostage, the café waitress wants Murphy to leave the gang and marry her, Stewart wants him to end his life of crime and go straight. Meanwhile, DeWilde is carrying a $10,000 payroll in a shoebox.
Plausibility. The scenery is spectacular and the action sequences are fine. What doesn’t work very well is the attempt to make Stewart’s role plausible with him in it. He’s supposed to have been unemployed for five years because he once helped his brother escape capture. Problem is, Stewart’s character is too good-natured to be convincing as a dishonest man. He also looks and acts too well fed and unconcerned to be so down on his luck.
Murphy’s character, for what has become of him, is also implausibly sunny. He’s been untouched by keeping company with desperadoes. Robbing trains is all fun and games to him. He seems to think his reputation as a fast gun makes up for a life of living in his older brother’s shadow. The costumers dress him in black, but he has no shadow of his own.
Dan Duryea, as the gang leader, is supposed to be scornful and has been told to shout all his lines. Rather than making of him a fearsome tyrant, this just makes him look loud and stupid. A waste of talent. Brandon DeWilde, who seems to have got little helpful direction, is still playing Joey from Shane. 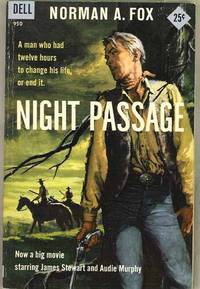 The colorful photography, the dancing and farcical brawling at the end-of-track camp in the opening sequence, plus Stewart’s songs, make the film look like a movie musical. The robbery of a moving train and the final shootout at an abandoned mining camp are exciting. But the “night passage” drama leans toward “noir” and then slips into melodrama and sentimentality.
Writers. As I said, I’d like to read the novel. I’m guessing that author Fox does a better job of integrating these elements to tell the story. Fox, by the way, was a Montana resident and one of the founders of the Western Writers of America. According to Tuska and Piekarski, he wrote thirty or more westerns over a 20-year career, plus a couple of hundred short stories for the pulps.
Screenwriter Borden Chase had a long career as a Hollywood writer, with scripts for Red River (1948), Winchester ’73 (1950), and Bend of the River (1952). Tuesday's Overlooked Films is the untiring enterprise of Todd Mason over at Sweet Freedom.
Photo credits: Wikimedia Commons
Coming up: Gwendolen Overton The Heritage of Unrest (1901)
Posted by Ron Scheer at 6:00 AM