Dagoberto Gilb, The Magic of Blood 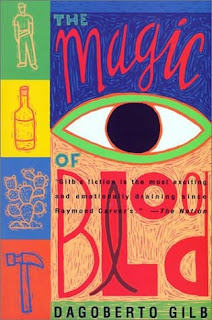 Gilb is one of a kind. I don't remember reading stories like these before. They capture the lives and inner worlds of men who make a living as construction workers, day laborers, auto mechanics, and factory workers both on the job and during stretches of unemployment.

Most are struggling to provide food and shelter for a young family; some are still single. For the most part they are Mexican-Americans living in El Paso and Los Angeles. Modest men, they take pride in themselves and their work, they drink beer, and they have women on their minds.

As a journeyman carpenter, Gilb is familiar with the work of putting up buildings, the dynamics among men on a worksite, and the way they think about themselves, their lives, and what they do for a living. Most stories are told in the first person in a stream of conscious style like someone leaning against a bar talking, with a beer in hand.

A teenager working in a laundry becomes involved with a young woman on the job while overdosing on a song by Vic Damone in "Vic Damone's Music." A tile layer becomes obsessed with another man's runaway wife in "Getting a Job in Dell City." Two city workers have too many beers and drive a new truck off the road in "The Truck." A man gives a ride to his estranged father in the middle of the night in "Something Foolish."

A tyrannical construction foreman is intimidated by a laid-off worker in "Churchgoers." A filling station mechanic labors grimly into the night to fix a car in "Al, in Phoenix." Two musicians spend the night with a couple girls they pick up on the road to Austin in "I Danced With the Prettiest Girl." And my favorite story, "Nancy Flores," is about a school boy's first romance brought to an end by another boy's crude joke, while years later his job brings him together with another of her old flames.

There are 26 stories in this collection, and every one of them is a revealing glimpse into the life of an individual, with his pride and shame, desires and disappointments, fears and small triumphs. First published in 1994, it belongs on any shelf of literature of the American Southwest.

The Magic of Blood is currently available at amazon and AbeBooks. Friday's Forgotten Books is the bright idea of Patti Abbot over at pattinase.

Coming up: John Syales, A Moment in the Sun
Posted by Ron Scheer at 6:00 AM