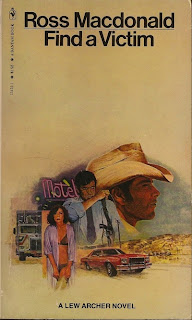 California writer Susan Straight recommended this novel recently when discussing writers of the West who deserve being re-read. Crime fiction is a little outside my usual interest here at Buddies in the Saddle, but Straight is a personal favorite (Blacker Than a Thousand Midnights, Between Heaven and Here), so I looked for a copy.

It’s tempting to read this Lew Archer mystery as a western. It has many of the western genre’s elements, though it is set in the mid-twentieth-century. Archer is far from LA, out in the Central Valley headed for Sacramento when he stops for a hitchhiker who is dying of a fatal gunshot wound.

There’s a dusty, hot town in the middle of nowhere, a Stetson-wearing county sheriff, some “rustling” (though of a truckload of booze, not cattle), more gunplay and fistfights, a saloon, assorted Mexicans and Chinese, a shootout, a chase, and a day-trip into the Sierras.

Macdonald’s storytelling style is as spare as the genre western. As the novel’s central character, Archer has the unsentimental attitude of a cowboy hero who has had more than enough of outlaws and being shot at by them. Like the cowboy, Archer is a drifter across a kind of wilderness, where there is no attachment to keep him from moving on when he chooses.

Where the analogy begins to break down is the sheer complexity of Macdonald’s plot. The story begins with the simple question of who shot the hitchhiker. But as Archer’s curiosity gets him piecing together bits of back-story, there unfolds little by little a miasma of small-town chicanery. The question of who killed the hitchhiker turns into one of what the hell is going on here?

Another difference from the black-and-white world of the western is the many shades of moral turpitude among the men and women Archer meets. Though most remain legally innocent of wrongdoing, all share a degree of culpability, for all have made choices that have led to murderous consequences.

Though I don’t remember reading Macdonald before, I do know Hemingway, who had many imitators among western and crime fiction writers. Here is the novel’s opening paragraph:

He was the ghastliest hitchhiker who ever thumbed me. He rose on his knees in the ditch. His eyes were black holes in his yellow face, his mouth a bright smear of red like a clown’s painted grin. The arm he raised over-balanced him. He fell forward on his face again.

The hospital was visible in the distance, a long white box of a building pierced with lights. Nearer the highway, the lighted screen of an outdoor theater, on which two men were beating each other to the rhythm of passionate music, rose against the night like a giant dream of violence.

Maybe unfairly, the grim tone reminded me of parodies of hard-boiled fiction, dating back to The Firesign Theater’s Nick Danger. A similar deadpan, death’s-head humor lives on today in the wry, tough talk of Elmore Leonard’s Raylan Givens.

What’s existential is the moral groundlessness of the world Macdonald writes of. Archer and the people he meets are worn down by the failure to make any meaning of the empty lives they live. Archer’s intelligence heightens his awareness of that dilemma. It is also a refuge for him. Less intelligent, damaged, and otherwise compromised people fall by the wayside.

Find a Victim is currently available at amazon and Barnes&Noble, and for kindle and the nook. Used editions can be found cheap at Abebooks. For more of Friday’s Forgotten Books, click on over to Patti Abbott’s blog.