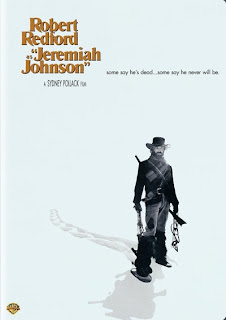 After 40 years, this film about a legendary mountain man may not pass as history, but it still holds up well. Little is known about the actual “Liver Eating” Johnson who is remembered for his kill-or-be-killed history with the Crow Indians. Like Bonnie and Clyde (1965), Butch Cassidy and the Sundance Kid (1969) and other movies from the same period, his story is told as a colorfully glamorized portrayal of a social dropout.

In this case, instead of robbing banks and trains, the central character leaves behind the ordered world of civilization to live alone in the untamed and unspoiled wilderness. His dream is the American one of complete self-reliance, using survival skills to live as a self-sufficient individual. The appeal of that dream accounts for the elevation of the Daniel Boones and Buffalo Bills of frontier history into larger-than-life figures.

With each generation, legends like this are reformulated and retold, their heroes and their feats reflecting the current times. Unencumbered by historical fact they are free to represent popular beliefs and ideals. The way this film represents what little is known about its hero says much about the period when it was made—the Vietnam era.

Jeremiah Johnson gives us a hero for a nation exhausted by war and split between hawks and doves, the right-to-bear-arms libertarians vs. the college kids who were turning on and dropping out. It both is and is not a western, depending on your point of view. And in Robert Redford, we get a handsomely good-looking face onto which an audience could invest just about any set of mid-century American values.

Plot. In the opening scene, Redford steps off a primitive river craft, as a voice-over narrator tells us he’s just a young man looking for adventure on his own in the mountains. That he’s little more experienced at this than you or I would becomes clear in the next scenes as he goes hungry and nearly freezes in the snow.

A seasoned mountain man called Bear Claw (Will Geer) rescues him and teaches him the survival skills he needs. Before long, he’s on his own and following his nose into the Rocky Mountains. Rescuing a man (Stefan Gierasch) buried up to his chin by Indians and left to die, he finds himself taken in by a French-speaking, Christianized tribe and unwillingly married to the chief’s daughter (Delle Bolton).

Too decent to sell her or abandon her, he eventually grows accustomed to her companionship. He’s also joined by a young boy (Josh Albee), whose family has been killed by Indians and whose mother has been traumatized and driven mad. At her insistence, Johnson takes the boy with him. In time, Johnson, wife, and boy settle down, building a log cabin and becoming a little family.

Life is cozy until a company of cavalry shows up, looking for Johnson’s help in rescuing a stranded wagon train of immigrants. Riding over a mountain pass, he first stops the soldiers from crossing through a sacred Indian burial ground. But snow is falling and there is some urgency. Instead of turning back, he reluctantly leads them on.

Alas, he pays dearly for the decision. He returns home to find his cabin burned and his wife and the boy killed by Indians. During the rest of the film he eludes their efforts to kill him, as well. In a series of attempts on his life, we see him kill one Indian after another, until finally there is a truce, and he is free to go on living unmolested.

Back to the future. “Liver Eating” Johnson (or Johnston as some records have it; real name John Garrison) was believed to have eaten the livers of the Crow Indians he killed. His intent, according to legend, was to desecrate the dead in a way that would horrify and terrify the Crow. That detail, which must have excited the imagination of whites at one time, had lost its appeal by 1972. Understandably, the film makes no reference to it.

Another nod to the sensibilities of 1970s moviegoers was its approving portrayal of a white man taking an Indian wife. A hundred years ago, that part of Johnson’s story would have made him a “squaw man” and beyond the pale of respectable society. Not only would he have been stooping to marry someone below his social position. Indian women were widely thought of as unattractive.

In reality, Johnson (1824-1900) would have been the more scarifying and off-putting of the two. Looking at photos of frontiersmen and mountain men, you don’t find any with the clean good looks of Redford. You get the sense that they were social rejects long before they lit out for the territories. They’d be lucky to find any kind of wife.

Even more problematic would have been the conceiving of mixed-blood children. It was commonly thought that these “half-breed” offspring displayed the worst traits of both races. The film doesn't indulge these racial biases but sidesteps them by having Johnson marry a pretty girl with white features, and their “child” is the white boy adopted by Johnson.

One also suspects that a liver-eating mountain man would have few of the good graces that Redford brings to his character. The affection that develops between Johnson and his Indian wife is sweetly tender. And he seems to withstand the effects of social isolation very well. The half-crazed Bear Claw is played for laughs in the film, but is probably closer to the truth about mountain men.


Redford himself often gives Johnson a blankness that stops with his good looks. Paired in scenes with Geer and Gierasch, he delivers lines with that comic irritability he brought to the Sundance Kid. When he’s alone, with characters who do not speak English or do not speak at all, his reactions are slow and so subtle you wonder if his character is thinking anything at all.

Wrapping up. All that aside, the film has an engaging story to tell and tells it beautifully. The film was shot in the snow-covered mountains of Utah, and the scenic photography must have thrilled the Utah Tourist Board. You may fault it for being more National Geographic than realistic, but the majesty of those mountains and the rich, orchestral soundtrack give you a thrill anyway.

The Indian killing is downplayed into a montage sequence that would probably be portrayed with a good deal more suspense and graphic bloodshed today. Instead of that, after several years of war footage on the nightly news, the film seems intended as escape fare. “How’s the war going?” Johnson says to the cavalry officer who arrives at his door. He means the War with Mexico. It’s over, he’s told, but the audience at the time surely felt the wry reference to the current one.

The screenplay, written by John Milius and Edward Anhalt was based on a novel by Vardis Fisher. The widescreen version of the film is available on DVD and wants to be viewed on the biggest screen you can find to project it. The original three-minute overture scored for the film has been restored, plus an additional “entr’acte” for the intermission. Total running time is 1:56.

Jeremiah Johnson is currently available at netflix and amazon and Barnes&Noble. For more of Tuesday’s Overlooked Movies and TV, click on over to Todd Mason’s blog.

Coming up: Ray Bradbury, "Last Night of the World"