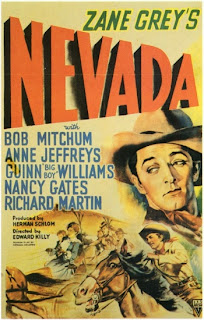 This remake of a remake was Robert “Bob” Mitchum’s first film with a starring role. He plays the title character, “Nevada,” in a story about gold rush crooks trying to swindle folks out of their ranches and prospecting claims. They've discovered that the worthless “blue stuff” being dug up is really rich in silver. But Mitchum foils their plans.

Plot. Mitchum is riding with two sidekicks, Dusty (Guinn “Big Boy” Williams) and Chito Rafferty (Richard Martin). Winning $7,000 shooting dice at a saloon, Mitchum has to make a hasty exit as he declines to give the angry saloonkeeper a chance to win back the money. Chased out of town, the three friends split up.

When Mitchum rides up on a man who's been ambushed and left lying in the road, he is discovered standing over the body by a sheriff and posse who arrive on the scene. They assume Mitchum killed the man for the money he is carrying. They don’t believe it is gambling winnings, and they haul him off to jail.

A woman (Anne Jeffreys) who runs a gambling hall in town recognizes Mitchum as the man who rescued her and a wagonload of her dancing girls in reel one when she lost control of her team of horses. He seems hardly a killer to her, she says. But as the only banker in town, she happens to know that the dead man was carrying $7,000.

Trail pals Williams and Martin bust Mitchum out of jail with a clever ruse, inciting a lynch mob to break into the jail. Once he’s out in the street and on a horse with a rope around his neck, the three of them race off out of town.

The villain of the story (Craig Reynolds) and his henchman (Harry Woods), as we’ve known all along, are the ones who killed the old man and took his money. Reynolds and Jeffreys are old friends, and he lets her in on the secret that he’s buying up local land before anyone discovers there are rich deposits of silver under it.

After a comparison of bank notes, Jeffreys learns that Mitchum was not carrying the stolen money. He's been telling the truth. There’s a lot of riding back and forth and a couple of fistfights as justice slowly takes its course. Reynolds shoots his partner, Woods, to keep him quiet, and Mitchum persuades a mining engineer to assay a sample of the ore believed to be worthless. Lo, it’s found to be rich with silver.

Woods, with his dying breaths, reveals to Jeffreys that he and Reynolds did the dirty work of killing and robbing the old man. There’s a final confrontation between Mitchum, Reynolds, and Jeffreys, in which Reynolds accidentally puts a bullet through Jeffreys. Mortally wounded, she is seated in a chair where she can look out the window with a pleasant view of the state of Nevada as she calmly dies.

B+ for a B-western. This short, 62-minute film is an above-average B-western. Mitchum is excellent, with that wonderfully cool presence he brought to so many roles in his career. He doesn’t know fear, Jeffreys says of his character early on, and it’s clear that he doesn’t. Mitchum’s movements are casual and unhurried, his stance relaxed. Note the way he wears his hat on the back of his head.

Always he has that unsmiling poker face, eyes not quite fully open, as if he is quietly taking the measure of whoever he’s talking to. If his face registers anything, it’s with a slight raising of the eyebrows, as if to say, “Is that so.”

His saddle partners are not just sidekicks, with roles played for laughs. They are friends rather than the usual foils of the cowboy hero, and they have key parts to play in the plot. The role of the whiskery buffoon, a stock character in B-westerns, is a barfly called Pancake, played by character actor Emmett Lynn.

Also, for added value, the film includes an instructive scene in which the mining engineer (Edmund Glover) actually fires a sample of ore to assay its ingredients and value. There is frequent mention of assayers in early western novels, but I don't recall ever seeing the job done on screen before.

Curiously, while Mitchum has a couple of dust-ups with the villains, including a fistfight that nearly rips off his shirt, he never fires a gun at them. One of the villains is mortally shot by the other, who also pulls the trigger that fells Jeffreys in the last scene. For all his misdeeds, he is taken away at the end by townfolk, presumably to get a fair trial before being hanged.

You might expect Mitchum and Jeffreys to end up in each other’s arms, but this western is short on romance. Another girl in the cast (Nancy Gates) has scenes with Mitchum, but she’s a peripheral character who doesn’t make the grade as a love interest.


Wrapping up. The film claims to be based on a Zane Grey novel, to which it bears a remote resemblance. The story was published first as a serial in The American Magazine (1926-27) and then as a novel in 1928. In 1927, an adaptation was filmed with Gary Cooper in the lead role. A remake in 1935 starred Buster Crabbe.

The film is competently directed by Edward Killy, who directed a number of westerns during 1935-1945, including West of the Pecos (1945), also starring Robert Mitchum. Anne Jeffreys has had a long onscreen career, including a lead in Dillinger (1945), and numerous TV roles. She appeared as one of a pair of ghosts in the series Topper (1953-55), in a role originated by Constance Bennett.

The film was shot in the Alabama Hills near Lone Pine, California, giving a rugged appearance to much of the location photography. Nevada is currently available at netflix and at amazon and Barnes&Noble. For more Overlooked Movies and TV, click over to Todd Mason’s blog. Tweet