Agnes Christina Laut, The Freebooters of the Wilderness (1910) 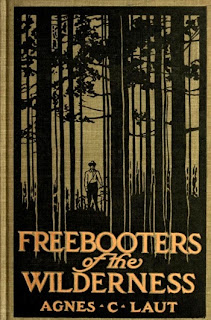 This is a muckraking novel about land grabs and corrupt politics in the West. Our hero is a dedicated employee of the Forest Service, trying to thwart the schemes of a U.S. Senator who is snapping up coal and timber from public lands. This jam-packed novel is also a steamy love story, with a desert adventure, a courtroom drama, and sequences of rapturous nature writing.

Plot. Though he doesn’t know it when we meet him, Dick Wayland is poised on the threshold of taking on the wily Senator Moyese, the novel’s unapologetic robber baron. Wayland knows that fighting him is a lost cause. The man holds all the trump cards. For one thing, he owns one of the local newspapers and has a PR man, Bat Brydges, who manages what’s printed in the other two. The Senator even has the local sheriff in his pocket.

The law and the slow judicial system work in his favor. Federal legislation covering public lands and national forests is so loosely regulated that coal and timber are basically there for the taking. Moyese acquires land by putting newly arrived immigrants and each member of their families on 160-acre “homesteads,” which he then buys cheap when the time to improve them runs out. Court challenges testing the legality of this business drag on unresolved and without end. Meanwhile, his mills and mines operate nonstop.

Also in the cattle business, the Senator is in a running battle with local sheep men who have grazed their herds unmolested until now. Several of Moyese’s cattle-rustling thugs defy Wayland’s grant of grazing rights to one sheep man, Macdonald, by running his herd over a cliff. Their callous disregard for a herder, the young son of a local missionary, results in the boy’s death.

This is the tipping point for Wayland, who gives chase to the men. In the company of an old frontiersman, Matthews, he heads into the mountains, through the springtime remnants of winter snows, narrowly escaping a massive avalanche. The pursuit takes them into desert wastes that leave them near death for lack of water. They manage to survive, though they never catch up with the thugs, who succumb one by one to accident and exposure.

Character. A Yaley who is now a humble federal employee, Wayland is an earnest laborer in Uncle Sam’s vineyards. He aspires to standards of conduct that would place him among hard-line conservationists today. Not a tree-hugger with romantic notions about preserving the wilderness, he is more concerned with theft of publicly owned natural resources.

Encouraged to think of himself as a warrior in the defense of the public interest, he comes to accept that he can only make minor skirmishes in the battle of Right against Might. He can’t win, but he will sacrifice his own life in the fight if he has to. As the story takes place in the foothills and valleys below Holy Cross Mountain, we’re invited to regard his efforts as Christ-like.

Jack Matthews, his older companion on the trail and mentor, is a man no better than he needed to be until he turned 40. He then mended his ways and became an itinerant parson. Disdainful of book learning and the “sissie,” “bread-and-butter goodness” of average churchgoers, he says he’s a “fighting” Christian. He knows “the trick o’ puttin’ Christianity into th’ end o’ m’ fist.”

Villainy. Few early western novels draw their villainous characters so fully as the smoothly greedy Senator Moyese. He knows every argument and counter argument of the Waylands of the world who would stop him from amassing a personal fortune by monetizing the wilderness. Tell him the lands belong to the public, and he’ll say he is the public, and any man is welcome to follow his example.

Tell him he has no right to what he is stealing, and he’ll say he’s free to do whatever the law permits. So try and stop him. Appeal to a sense of decency and social responsibility, and he’ll say the words have no meaning. Only a fool puts any stock in them. It’s every man for himself and the devil take anybody who doesn’t agree.

For the Senator, “freedom meant freedom to make and take and break independent of the other fellow’s rights.” Smugly sure of himself, he simply denies that others have rights. His one passion is “getting,” and so much the worse for people, things, or laws that come in the way.


Romance. Laut does not portray young love with polite reserve. Early on in the novel, having spent no more than an hour alone together, he and Eleanor Macdonald seal their mutual attraction with a hotly passionate kiss.

As he pursues the killer cowboys into the desert, he has fevered visions of her that steel him with fierce resolve. Going into battle against the forces of greed and malice, he is a warrior inspired by her faith in him. “Did a woman ever realize what her love meant to a man,” he wonders.

Back from the desert, Wayland puzzles Eleanor by not rushing into her arms and thence to the altar. Yes, he loves and admires her, but marriage isn’t an option. Without his own money, he says, he can offer her no security. “You will do as security,” she insists, applying some gentle arm-twisting, and before long they are on their honeymoon, tenting in the woods.

Wrapping up. Agnes Christina Laut (1871-1936) was born in Ontario, Canada, and grew up in Manitoba. After a schooling in Winnipeg, she was for a time a writer with the Manitoba Free Press. She emigrated to the U.S. at the turn of the century and was a successful magazine writer and novelist.

Her first fictional works were well-researched historical novels set in Canada, which were immediately popular. Traveling widely, she also wrote of the American Southwest in Through Our Unknown Southwest (1913).

The Freebooters of the Wilderness is currently available at google books and Internet Archive and for kindle and the nook. For more of Friday’s Forgotten books, click on over to Patti Abbott’s blog.