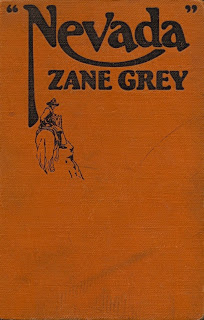 I’ve had a first edition copy of this book for about 15 years. It was given to me by a friend at work when I was just getting into western history—but not yet westerns. Watching the 1944 movie Nevada based on it (and reviewed here), I got curious about the original story. So it was time to read the book.

How the movie compares to the novel can be summed up in two words. It doesn’t. Besides the names of a handful of Grey’s characters, there’s not the remotest resemblance between the stories. Still, movie posters of the time advertised the film as “Zane Grey’s Nevada.” So much for truth in advertising.

Plot. In its 365 pages, the novel tells a complex story involving a gunman named Jim Lacy who is known to some characters as “Nevada” and to others as “Texas Jack.” As Jim Lacy, he has a reputation that puts fear into the hearts of even the bravest men. As “Nevada,” he is remembered by a California family as an honorable man who won their love and respect before disappearing in the novel’s opening chapter.

As “Texas Jack,” he’s a hard-working cowboy for an Arizona rancher, who goes after a gang of cattle thieves called the Pine Tree outfit. In a plot device often used later in B-westerns, he infiltrates the gang to learn the identity of its members. One by one, he then kills them.

Maybe two-thirds of the novel is devoted to the family from California, Ben Ide and his sister Hettie. Both have fallen deeply in love with the man they know as Nevada, and they leave California to take up ranching in Arizona, where each hopes to find him again. Alas, no one knows of a “Nevada” there.

By chance, Hettie learns that Nevada and the notorious Jim Lacy are one and the same. Stunned by this discovery, she decides to keep it from her idealistic brother. His early enthusiasm for Arizona is waning as he finds that he’s been cheated by the man who has sold him a ranch, and thieves are making off with his cattle.

When the paths of the two men finally cross, it is after Ben has become determined to see the man “Jim Lacy” hanged as a cattle thief. Having killed the last gang member, Lacy is being held under arrest when Ben first lays eyes on him. Overjoyed to be reunited with his long-lost friend, Ben learns that Lacy has been working undercover for two local ranchers. Any charges against him are handily dismissed.

Meanwhile, Hettie Ide has been shaken to her boots by this sudden turn of events. She feels unworthy of the courageous man whose true identity she’s doubted. For his part, having always worshiped Hettie, he feels unworthy of her. They finally get past their false assumptions about each other and agree to marry and live happily ever after.

Character. The strongest parts of Grey’s story have to do with the man of three faces, Jim Lacy. A decent and honorable man but given to violence, he is something of a wounded hero. As we learn in the opening chapter, he has killed others in the service of those he respects. But it also isolates him as a fugitive from those who would repay violence with violence.

More than once, Grey characterizes Jim Lacy as a “lone wolf.” Hiding out for a while in a remote canyon, he is swept up by feelings of loneliness and self-pity. There is a melancholy, despairing side of him. He knows shame for his part once in a stagecoach robbery. Yet while he lives at considerable risk, he knows no fear, for he “was not in love with life.”

Before he disappears from the narrative for much of the novel, he is established as a man who never loses his cool. He doesn’t drink, because alcohol affects his judgment and his skill with a gun. He avoids trouble and calmly declines to be lured into a gun duel by a man he scorns. He’s also unmoved by the come-on from a flirtatious saloon girl. But when she is beaten up by her boyfriend, he kills the man.

Themes. The novel is a celebration of Arizona. Whole chunks of it would make rapturous prose poems for Arizona Highways. Zane Grey’s reputed love of the outdoors is in evidence on page after page.

For a western novel, there’s an unusual amount of it devoted to the subject of love and a resulting flood of romantic emotions. Besides Ben’s and Hettie’s frequent professions of love for the absent Nevada, we get Nevada’s lonely yearning for Hettie. There’s also a subplot devoted to the burst of first love that consumes a young cowboy Marvie and his sweetheart Rose.

Style. Grey can put together a page-turner of an adventure story, but a stylist he is not. Compared to numerous other writers of western stories of the time, his way with words is often graceless and unimaginative. Often the novel reads like a plot summary or a movie treatment, the scenes described in broad strokes, the details and specifics to be filled in later.

The descriptive sections get listy, as when he mentions every species of wildlife to be found in an area of landscape. Sections can be heavy with exposition, usually relayed through conversation between characters. The melodrama also gets cranked way up in some scenes, where characters succumb to implausible excesses of emotion.

In the love affair between Marvie and Rose, they must meet secretly in the woods because her older half-brothers are violent and apparently degenerate thugs. One has already given her to another man, whose attempt to “ruin” her was happily thwarted. When the same half-brother finds the two lovers in each other’s arms, he attempts to kill the boy and gets shot dead for his trouble.

Grey often writes with what seems like a 14-year-old’s understanding of the adult world. Motivations are simplistic. With the exception of Jim Lacy, his characters are flat and two-dimensional. Complications for his ranch-owning characters are smoothed over by what seems to be a bottomless supply of money, and a lack of concern for financial reversals.

Wrapping up. Grey’s place in the history of the western novel continues as something of a mystery to me. He arrived after scores of other writers had published mainstream novels set in the American West. He came a decade after Owen Wister’s The Virginian (1902) and finally duplicated that success with a top-ten bestseller The Lone Star Ranger (1915).

His popularity continued year after year following that. He had married the dime novel western adventure of the nineteenth century to the mainstream popular novel of the early twentieth. The result lacks the more complex themes and narrative styles of his predecessors. Instead, he stripped away the literary aspirations of previous writers and wrote simply for plot and escapist entertainment.

You can argue that in doing so, he did much to invent the western genre as it emerged and thrived in the decades that followed. Missing are the actual West itself and its history. In their place is a generic West, with references to its myths, as in this novel’s frequent mention of the Lincoln County War and its most memorable figure, Billy the Kid. For a novel set in Arizona, there is little or no mention of Indians or Mexicans, or of the actual work of cattle ranching.

Grey's timing was perfect for the sudden growth of the movie industry, with its appetite for stories with strong visual content. His novels lend themselves agreeably to the new medium. Whether in setting, character, or action, he wrote for the eye.

Nevada was published as a serial in The American Magazine (1926-27) and then as a novel in 1928. In 1927, an adaptation was first filmed with Gary Cooper in the lead role. A remake in 1935 starred Buster Crabbe. Another in 1944 starred Robert Mitchum. The novel is currently available at AbeBooks and for the nook. For more of Friday’s Forgotten Books, click on over to Patti Abbott’s blog.