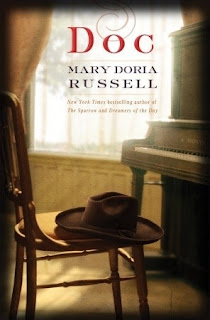 One of the most curious friendships in the Old West is the one between Wyatt Earp and Doc Holliday. Each of them was so different from the other, Doc a well-educated and cultured Southern gentleman and Wyatt a hardheaded, unpolished Yankee of apparently no more than average intelligence.

Russell takes us back a few years from that fateful day in 1881 in the streets of Tombstone to the Kansas town where the two men became acquainted. In the pages of her novel, we’re in Dodge City, and the year is 1878. Wyatt has a temporary job as a keeper of the peace, and Doc has followed the money from Texas, using his skill at cards to make a living as a gambler.

The others we know from history are here, too. Wyatt’s brothers Morgan and James, and their women, including Kate Harony, the prostitute who is both bane and comfort for the ailing Doc. The town fathers are here as well, Bob Wright, George Hoover, and others. Entertainer Eddie Foy provides bawdy comedy and song at the Comique (pronounced “Commy-Q”).

Plot. Readers looking for Old West action will not find much of it in this story of people living day-to-day lives in a frontier railroad town. The excitement to be found tends to be of the unwelcome kind, as rowdy, young cattle drovers fill the saloons in the summer months. The job of keeping the peace falls to the likes of the Earp brothers and another legend in the making, Bat Masterson.

Doc’s poor health is treated with a graphic attention likely to surprise readers who think of TB as a quietly wasting disease, as we typically see it portrayed in film. Doc’s cough and bloody handkerchiefs are a motif throughout the novel, and a crisis point is reached near the end as his condition sharply worsens until he’s almost near death.

His recovery—one of several—is observed with a Christmas party at which he sits down at a newly tuned piano and plays the entire Emperor Concerto. It is a spellbinding performance that holds the assembled guests in a state of awe. Then with the coming of the new year, the Earps and Doc decide to pull up stakes and head for Tombstone. Prospects, they believe, are better there. We know what they don’t, that it’s an appointment with destiny.

If there’s a plot thread at all, it concerns the mysterious death of a young, black faro dealer found in the smoldering remains of a livery barn burned to the ground. Doc suspects foul play and eventually unravels the mystery.

History. Russell gives credit to several sources as the historical basis of the novel, notably Karen Holliday Tanner’s biography, Doc Holliday: A Family Portrait. She takes imaginative liberties in filling in the details and clarifies in the opening pages of the book the few characters who are fiction and those that are not.

What gives the novel its particular point of view is her belief that the deepest friendship among these men was the one between Doc and Morgan, Wyatt’s younger brother. And Morgan is surely the most endearing, good humored, and likeably intelligent of the Earps. Wyatt, by comparison, is stolid, rigid in his Methodist beliefs, and no smarter than he needs to be.

Russell also presents a Doc who actually practices the skills he’s learned in dental school. Gambling provides a much needed revenue stream, especially for a man of his generosity, but being a dentist permits him to feel a degree of professional pride. One of the finest moments in the novel is his making of dentures to replace Wyatt’s broken front teeth.

An astute observer of male bonding, Russell portrays the intimacy of these moments as both expression and test of their friendship. It is Morgan who shepherds his brother through the delicate process, helping him overcome a lifetime of resistance to nearly any kind of trust. And you see how it is Morgan who is over and again the connection between Wyatt and Doc.

Wrapping up. I really loved this novel. Russell brings to life people we know by name, before they became the stuff of legend. And she imagines them as they probably were, as fallible, vulnerable human beings, with their down-to-earth hopes, fears, and regrets.

Most especially, she creates a Doc Holliday who charms you with his wise sensibility and gracious Southern manners, while sadly exiled to a place far from his Georgia home. Doc is currently available at amazon, Barnes&Noble, and AbeBooks, and for kindle and the nook.