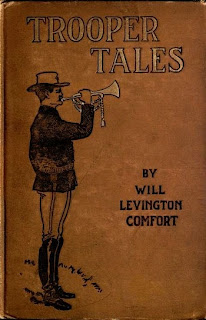 Like James Michener, who turned his WWII service into Tales of the South Pacific (1947), Comfort first published Trooper Tales after returning from the Spanish-American War. It is a collection of short stories and sketches of young enlisted men. Most take place in Porto Rico (now Puerto Rico), but “cactus and alkali,” he says, “blows about in a couple of these yarns.”

“Red Brennan of the Seventh.” Trooper Red Brennan is a hard case, his worst enemies being whiskey and himself. He is lured from duty by an Indian woman, Kate Poison-Water. The narrator of the story describes her as “a serpent in cunning, a tigress in strength and agility—a Sioux squaw in general deviltry.” She is also fearsome in her devotion to the young trooper.

Returned to camp, Brennan is held for a time as a prisoner until freed to fight alongside Custer’s troops at the Little Big Horn. Meanwhile, a Sioux prisoner, Chief Rain-in-the-Face, is being held under guard by Major Reno. During the night before the battle, Rain-in-the-Face is set free and his guard killed.

On the day of the battle, all but one of the bodies of the felled men under Custer’s command are found stripped and mutilated by the Sioux women. However, Red Brennan, like Custer himself, remains fully clothed, with arms crossed over his chest, a sign of respect for valor in battle. Beside the dead Brennan is the dying and grief-stricken Poison-Water Kate. It is surmised that it was she who freed Rain-in-the-Face, with the promise that Brennan would be spared.

“Back to San Anton’.” In this dark story, set in the Southwest, Comfort tells of a sergeant, Mulgowan, who stoutly defends a Mexican girl who is ill treated by her father. Old Geldez, who supplies the troops with mescal brought from Mexico, does not appreciate Mulgowan’s interference.

Out on campaign, the sergeant begins to receive mysterious packages in the mail. The first contains the third finger of what seems to be a woman’s hand. The second contains the same finger from the other hand. Mulgowan disappears and as the troops later learn, he has found the girl with both hands missing. For deserting during wartime, the sergeant is court-martialed and sentenced to death.

Themes. Western novels about the military in the West typically focus on the officers. The enlisted men are simply background, and outside of Owen Wister’s Specimen Jones in Red Men and White (1896), their stories are seldom told. Thus Comfort’s portrayal of them adds a welcome layer of detail to our picture of life in the U.S. cavalry.

In his introduction, Comfort observes that whether written by commissioned officers or civilians, stories of the military get the enlisted men all wrong. Civilian writers misrepresent the gulf between them and their COs. Officers write of them as “baneful and temporary necessities,” who follow orders and neither speak nor think. Their pastimes are assumed to be no more refined than “cards, canteens and colored ladies.”

Comfort says he wants to show us the real article—“wild, incorrigible, splendid men!” His stories of cavalrymen often touch on the matter of camaraderie and how men become accepted or shunned by other men. Here from “The Silent Trooper,” he opens a story with some observations about trooper behavior:

A troop is a family of big boys. Some of them are big bad boys, and an odd thing about it is that these are not always the unpopular ones. Troopers do not fall on the neck of a new man. They treat him with pinnacled dignity, like old cavalry horses treat additions to the picket line. If the new man, in a reasonable period, develops no objectionable traits, he will find himself a member of the family, which is other words for a good fellow.

Two of the stories concern black soldiers, for whom Comfort shows notable respect as fighting men. The first story, “The Recruit in the Black Cavalry,” tells of a black regiment fighting bravely in Cuba. In another story, “Shadow and the Cherub,” Comfort writes of a black soldier traveling onboard a troop ship.

Women. The woman figuring in many of the stories is usually the cavalryman’s “girl I left behind me.” Young men far from home are often stirred by yearnings for a sweetheart who may have kissed them once. Letters from her are awaited impatiently. When they don’t arrive in troop mail, the soldiers suffer painful doubts, and the girl’s devotion and loyalty are at once in question.

At times, a cavalryman is drawn to a local señorita. In what is surely the tenderest story in the collection, “A Soldier and a Man,” a trooper scorned by a girl back home takes pity on a poor, parentless local girl, Eulalie. She is pretty but unsmiling, because her front teeth have been knocked out. His attentions stir up the jealous rage of a rough ox-driver, who wants the girl for himself.

He stabs the soldier, who lingers for a while in an Army hospital and marries the girl before he dies, leaving her $300 of his winnings from gambling. At story’s end, we know that his death has been avenged by her because the man’s oxen now graze the hillsides, unyoked and unmolested.

Style. Comfort’s occupation as a news writer shows in the tone and pace of the storytelling. Many of the stories have moments of wry comic irony. Here he introduces the makings of a star-crossed love affair:

The fact is well known that it is a breach of military etiquette for an officer to affiliate with a man in the ranks. It is infinitely worse than a breach for an officer’s daughter to do this. Unfortunately, the laws of nature are mightier than army regulations, and ever since the world has been made merry and sad by human attachments, young girls have become desperate over handsome men.

“The Last Cell to the Right” mixes reportage with horror, as Comfort describes the despairing lives of the poor and imprisoned. The narrator, a soldier serving a short sentence behind bars, shares his food with a small child, whose mother slowly starves outside the door of another cell. During the roach and rat-infested nights, the soldier clings to sanity, hearing the inhuman wails from inside that cell.

Wrapping up. Will Levington Comfort (1878-1932) was born in Michigan, attended public schools in Detroit and college at Albion College in Albion, Michigan. He was a newspaperman in Detroit and Pittsburgh before serving in the Fifth U.S. Cavalry. Discharged after contracting typhoid and malaria, he became a war correspondent in the Far East and Russia. He eventually settled in Los Angeles.

Trooper Tales was published by Street & Smith, and over the next quarter of a century, Comfort authored over 75 works of fiction for the magazines. Among numerous books, his novel Somewhere in South Sonora (1925) was made into a Ken Maynard western, Somewhere in Sonora (1927). That film was remade in 1933 with John Wayne in the lead role. Comfort’s novel Apache (1932), a portrayal of Indians of the Southwest, is considered his masterwork.

Trooper Tales is currently available online at Internet Archive and for kindle and the nook. For more of Friday’s Forgotten Books, click on over to Patti Abbott’s blog.