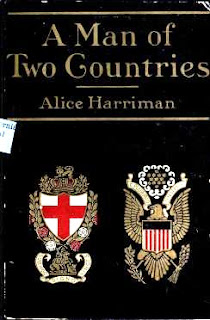 This political melodrama is set in Montana and the Canadian frontier, the two countries of the title. Its central character is Philip Danvers a young Englishman venturing westward in the 1870s to join the Northwest Mounted Police at Fort Macleod. Arriving there by way of Fort Benton in Montana, he meets all the novel’s other main characters while on board a riverboat.

All of them early arrivals in the raw days before the railroad, they make their fortunes over the next dozen years by fair means and foul. Their lives converge again in Helena, at the center of state politics, and Danvers becomes involved in a struggle by a millionaire to buy a seat as senator in Congress.

Plot. Danvers is a decent man, true to the principles of his class as an English gentleman. His nemesis, Robert Burroughs, is callously unscrupulous, amassing a fortune smuggling whiskey into Canada. When family obligations conflict with a career in the Mounties, Danvers settles in Montana and goes into the cattle business.

Burroughs goes into politics, determined to be the next U.S. Senator from Montana. Bribery is such an accepted way of influencing politics, he hardly needs to disguise his efforts to buy the votes he needs for election by the State Assembly. He has to make a special effort to persuade a principled state senator likely to block his election, Charlie Blair.

Burroughs enlists Eva Latimer to lobby for him and focus her feminine charms on Blair in particular. Unaware of and unconcerned by the effect of her efforts, she stirs Blair’s long smothered libido. Her husband has been in poor health, and discovering the two alone together, drops dead from heart failure.

Believing that he has purchased enough votes, Burroughs has the election put before the Assembly. But as the votes are being cast, Blair makes an impassioned speech exposing him, and Danvers is elected instead. The final coup de grace for Burroughs is the unexpected public appearance of his embittered squaw wife, abandoned long ago, and his “half-breed” son. Humiliated, Burroughs commits suicide.

Romance. Disappointed once after a youthful infatuation, Danvers remains a bachelor. Invited to an elegant dinner, he meets Blair’s sister, Winifred. Educated in Eastern schools, she is poised and polished. Blessed with a spark of intelligence, she makes clever conversation. She also flatters Danvers, who is not used to having a woman listen when he speaks either his mind or heart.

But his natural gentlemanly reserve keeps him at a respectful distance, and she wishes he’d be more demonstrative. She subscribes to a belief that true lovers are souls that have been separated at birth. She expects sparks to fly when they’re reunited, and she’s discouraged by his polite behavior.

But rapturous love, an old friend tells her, is not what binds two people for a lifetime. Happiness in marriage rests in “content, comradeship, loyalty.” These are the proof of “a woman’s power to evoke and to hold love.” It takes the flurry of tumultuous incidents at the novel’s close to bring the two at last together. No sparks fly, as they simply cling to each other “like tired, frightened children.”

Character. Danvers is the man of heroic stature in the novel, though his light of civilized rectitude casts a rather feeble glimmer in the general moral darkness of the frontier. As a young trooper, far from his home in England, he is eager to be part of “the strenuous game of making a new world” on the frontier. A handsome fellow when we first meet him, “lean flanked, broad-shouldered,” he throws a punch at Burroughs when the man insults the Queen.

He considers American politics “rotten.” In England, he says, public office is a pubic trust awarded to the most competent office seekers. The honor of that trust is payment enough for service, and bribes are unknown. But after becoming an American citizen, he’s persuaded to run for office as state senator. And he comes to believe that American government works in its way, despite incompetence and corruption.

Villainy. Burroughs is not the only villain in the novel. His henchman Moore, who gladly dirties his hands in the shameful business of handing out bribes, is nakedly cynical. He’s been contemptuous of decency from the beginning. We first meet him as a wolf hunter, collecting the hides of wolves he has left poison for on the prairie.

His presence in Helena is equally poisonous.“I tell you politics is a matter of a-gittin’ plenty while you’re gittin’,” he says to Danvers. Corruption is simply how things get done.


Women. Harriman is not overly gracious in her portrayal of women. As a girl, Eva can be forgiven for her trifling with men’s hearts. But after a few years of marriage, she remains shallow and self-centered. Easily bored, she wishes she could be in New York or some European capital, far from Montana. An attractive woman drawn to money and power, she has a natural affinity for politics.

Playing for a chance to win big for herself, she dreams of an appointment for her husband at a consulate in Berlin. Matters of integrity do not concern her. The end, she says with a shrug, justifies the means. It takes little encouragement to do Moore’s bidding in the interests of Burroughs.

Style. Harriman builds a good deal of suspense for her characters in this story of decent, honest men contending with the greedy and unscrupulous. While her characters are believable enough, they are often at the mercy of plot contrivances. The melodrama is sometimes cranked up to a steamy, fevered pitch.

In a pivotal scene, as Eva tries to win Blair’s vote for Burroughs, he loses his self-control. “You drive me mad, Eva!” Blair says. “You are more tempting than ever! Give me one kiss—one—and I’ll vote for Burroughs till hell freezes over!” In desperation, he makes a grab for her, just as they are discovered:

“No! No!” In terror Eva gave a suppressed cry and turned to escape the arms of the man she had maddened. With his hot lips brushing her own she turned away her face in impotent writhing, and saw her husband standing in the doorway.

And so it goes.

Wrapping up. Alice Harriman (1861-1925) was born in Maine but settled for a while in Seattle, where in 1907 she started her own book publishing company. A brief notice in The New York Times, when she died in Hollywood, remembers her as a novelist, poet, and publisher, and as a magazine writer since 1896.

Her own books about the West include a comic novel set in Yellowstone National Park, Chaperoning Adrienne (c1907) with illustrations by Charles Russell. As a publisher, she brought to print Therese Broderick’s The Brand (1909) and Irene Welch Grissom’s The Superintendent (1910), both set in the Pacific Northwest.

A Man of Two Countries is currently available online at google books and Internet Archive and for kindle and the nook. For more of Friday’s Forgotten Books, click over to Patti Abbott’s blog.