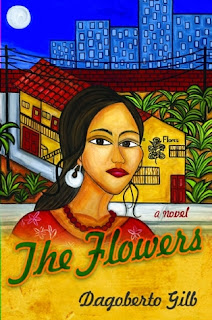 The flowers in the title of this novel are actually the name of an apartment building, Los Flores, in what seems to be East or South Central Los Angeles. Its narrator is 15-year-old Sonny, whose mother has married the owner of the building, where they live in one of the ground floor units. The renters at Los Flores represent a cross-section of the inner city, Chicanos, whites, and blacks.

Sonny’s Mexican family has been in the U.S. so long that Spanish is his second language. He has to have the gender-mangled name of his Anglo stepfather’s apartment building explained by his only friends from high school, a pair of bookish twins, Joe and Mike. Los Flores, one of them says (Sonny isn’t sure which one, because for a long time he can’t tell them apart), means not “the flowers” but “the Flores family.”

Plot. The novel meanders like a novel it somewhat resembles, Catcher in the Rye. Like Holden Caulfield, Sonny is no longer a boy yet not old enough to be a man. For him, 15 is an uncomfortable and aimless limbo where life is this series of mostly unconnected incidents dominated by the adults around him.

His Anglo stepfather is an overbearing hard ass, with firearms and the mounted heads of game animals on his walls. Though married only a few months, Sonny’s bored mother is already stepping out on the man. A lonely pot-smoking girl in a messy apartment upstairs seduces him. An ex-cop with an intimidated wife bullies him. Another couple teasingly taunts him for stealing the adult magazines that don’t fit into their mailbox.

An albino man who runs an unlicensed used car business on the street in front of the building wants to give him a car. A stranger he thinks is a pervert takes to stalking him when he’s walking the streets. Meanwhile, he falls in love with a girl who’s as good as being held prisoner in one apartment by her parents.

While Sonny is often told how important it is to have an education and he apparently goes to school, not once are classes or teachers mentioned. School has so little meaning for him that it doesn’t seem even to exist. Instead, completely on his own, he decides to learn French, which makes him smile as he uses it, partly because it puzzles everyone else.

For the most part, Sonny is a reliable narrator, except for the long wait before he admits that he not only sneaks into people’s homes when they’re away but steals any money he finds. Then, snooping in his stepfather’s desk, he discovers $1,000 stashed away. As events begin to push him toward a decision point about the girl he’s sweet on, that stash of money becomes increasingly an object of narrative interest.

Themes. The prevailing condition of life for Sonny is that nearly everyone either lies to him or is covering up something. He swims in a virtual sea of mendacity. His mother even implicates him, asking him to keep from her husband that she serves him store-bought salsa instead of making her own, then asking him to hide the cans in the garbage.

Having grown up with all this, Sonny accepts it as normal. He listens for what people are not saying, weighing their words for hidden meaning, catching nuances of inflection. For himself, Sonny has learned to be thoroughly guarded and untrusting. Here he is talking to his mostly inattentive mother about getting paid by his stepfather for a job he’s done:

“Don’t make any trouble,” she said. This was another kind of tone with another meaning. It wasn’t, I could tell, about me but about her and him, her and her trouble. “You hear me? I’ll give you money if you need it. You know that.”

If I really need it? I couldn’t believe she said that. “He will.” And no, she wouldn’t. She wouldn’t remember, and if she did, or I reminded her to remember, she’d either deny she offered or say she would later.

She stopped and, distracted, sponged the kitchen counter as if she’d already forgotten we’d had this conversation and then turned back to me, eye to eye. “Please tell him that I left the salsita in the refrigerator.”

For everyone in the novel, the purpose of talk is to pretend to communicate while disclosing as little as possible.

Style. The risk of having a teenage narrator is that they are so often whiners and complainers and thus irritating. Holden Caulfield’s constant griping about phonies is a prime example. Finally you wish he’d just shut up.

Sonny has plenty to complain about but seldom dwells on it. Not that he’s mature for his age or particularly likeable. Gilb makes him interesting by showing him as a survivor, even while he’s powerless to change anything about his life. Neglected by a mother who seldom wonders whether he eats meals, he hangs out at a bowling alley where the cook makes him “Mexican hamburgers” (served with jalapeños and salsa)—and where he sometimes bowls alone.

He nurses a whim of seeing Notre Dame in Paris and practices his conversational French from a borrowed textbook. On the boundaries of sleep, he lets himself get lost in hallucinatory dreams. And he counts and recounts the stolen money that he keeps under a corner of carpet in the bedroom where he sleeps, a room that he never refers to as “his” bedroom.

Wrapping up. I first found Gilb years ago with his collection of short stories The Magic of Blood (reviewed here). Having worked as a journeyman, high-rise carpenter with the United Brotherhood of Carpenters, he is familiar with the world of construction workers. He has written of men in blue-collar jobs in LA and the Southwest, and he writes like nobody else of that experience. Gilb is currently executive director of CentroVictoria Center for Mexican American Literature and Culture, at the University of Houston-Victoria in Texas.

His career as a writer was interrupted in 2009 by a stroke that left him able to type with only one hand. But he continues to write and publish his fiction, most recently another story collection, Before the End, After the Beginning (2010). His story “Uncle Rock,” from that collection can be found online here at The New Yorker. His books are available at amazon and Barnes&Noble and for kindle and the nook.

Interview
Dagoberto Gilb has generously agreed to spend some time at BITS to talk about writing and the writing of The Flowers. So I’m turning the rest of this page over to him.

Dagoberto, talk a bit about editing and revising this novel. After completing a first draft, did it go through any key changes?
If the publisher’s copyediting had its way, the ms would have looked much different. It was fascinating the number of “errors” found. I stetted at least 95% of the suggestions. A nightmare (and some were missed in the hb version).

Why? Apparently, that which I worked hardest at, capturing a narrative voice, was so effective, the belief was it was an accident, dumb. It wasn’t in the King’s English, or whatever you want to call it. Even so far as making Pink (an albino neighbor) speak in language that was “right.”

Were you thinking of any previous coming-of-age novels while writing this one?
I do not like coming-of-age books from any country.

The novel is not very specific about where or when it takes place. Any reason for that?
I think I must have failed here. Anyone who is from Los Angeles might vaguely recognize the Watts Riots of ’65, even the locale. But I did not want to write a date specific novel, historically accurate, or even a place specific one. Very much as I did with Sonny’s voice, I wanted setting to cross time and place boundaries. What I wanted.

What have been the most interesting reactions to this novel?
In the review in the New York Times, the critic went after the author—me—for portraying the troubled women characters as weak, caricatures—clearly, therefore, I do not have a deep enough grasp of women’s issues and concerns.

That is ridiculous at so many levels, but the only one I will mention here is that ALL the characters were weak and troubled, and if caricatures, the males are far more that than the females. They all lived in a messed up situation, that was the novel.


That review is more fascinating as to, first, the assumptions of what a Latino male is like specifically (muy macho, in my case, more below the belt than above the neck). Second, the manner the writer (me) was received in the large as a writer of several previous books, ones reviewed, even, in the NYTBR. It was clearly the critic’s first and only exposure to mine or the writing of the West or even Chicano literature.
Anything else you’d like to comment on?
I have found that I need to explain, post-publication, the age of Sonny. He’s fifteen. Little did I know that many think if a lead character is that age, the book is for readers of that age. Far far from it to me. I wrote it in a full maturity (too full even) of my life, and of course had no intention of The Flowers being a simplistic “coming of age” novel.

It must be a result of my own particular upbringing and misunderstanding—never crossed my mind that he was an American teenager in some American movie sense. In Mexico, for instance, I’d say that thirteen is when both boys and girls begin making decisions and living lives that will carry them into adulthood. I grew up in the states, very aware of these boys and girls, men and women.

The novel’s larger layer is about the Mexican American in a white-black oriented country. Its conceit and ambition is as the coming of age of the largest, unseen and unacknowledged historical demographic in this nation.