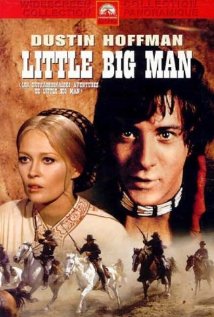 This is a film very much a product of its time—the war years of Viet Nam. It was made at the same time as Easy Rider (1969) and M.A.S.H. (1970), both appealing to the anti-war sentiments of the youthful counter culture. Its portrayal of George Armstrong Custer as a self-obsessed and maniacal Indian killer challenged Hollywood’s usual heroic view of him.

The film was a deliberate step away from the traditional portrayal of Indians as bloodthirsty savages. Its casting of Native Americans in prominent roles was also something new. Taken altogether, the film delivers a sobering version of the genocidal campaigns of Western history. Yet at the same time it is a big, comic entertainment. Surprisingly, given its pretty heavy “message,” it holds up well today.

Plot. The film tells the story of Jack Crabb (Dustin Hoffman), raised by Cheyenne Indians when his pioneer family has been murdered by the Pawnee. He is taught to be a warrior by Old Lodge Skins (Chief Dan George) and in a skirmish with whites ends up being recaptured by his own people. A preacher’s wife, Mrs. Pendrake (Faye Dunaway), reintroduces him to white customs, while lusting for him mightily.

Before long, he takes a job with a patent medicine seller (Martin Balsam), which gets him tarred and feathered by some irate customers. Found by a long-lost sister, he discovers he has the makings of an expert gunslinger, but after witnessing Wild Bill Hickok (Jeff Corey) kill a man, he realizes that he has no stomach for the occupation. His sister leaves him in disgust.

Marrying and going into business, he is attacked by Indians attempting to waylay a stagecoach, and the Indians make off with his new wife. Searching for her, he is reunited with Old Lodge Skins, who welcomes his son home.

Jack gets a job with Custer (Richard Mulligan) as a muleskinner but is horrified by the cavalry’s wanton killing of women and children. He saves a young Indian girl,  Sunshine (Amy Eccles), and they take up married life together back with the tribe.

Before long, he is the husband of three of her sisters, who have all been widowed by the whites. Believing themselves on safe ground where they've been promised to live forever umolested, they are attacked by Custer’s men. While Little Big Man saves Old Lodge Skins, his wives are all killed. Finding Custer alone in his tent, he determines to take revenge, but as much as he despises the man, he lacks the courage to take his life.

In despair, he turns to drink in Deadwood, where he is reunited with Wild Bill Hickok, in time to witness his death. Honoring the man’s last wishes, Jack delivers a pouch of money to Bill’s sweetheart at a local whorehouse, who turns out to be Mrs. Pendrake.

Taking a job with Custer as a scout, he advises the commander not to attack the warriors he is about to encounter at Little Big Horn. On the basis of some whacko reverse psychology, Custer determines to do the opposite, and we see his troops advance into the fatal engagement with the Cheyenne and Sioux.

Injured on the battlefield, Jack Crabb is taken to Old Lodge Skins, where he accompanies the aged man to a spot he has picked for his death. But death does not come, and the two men return to camp together. We last see 121-year-old Jack Crabb, in the present day, sadly encumbered with his comic-tragic memories.

Anti-hero vs. villain. This is a long film, well over two hours, with a large cast. Instead of a single storyline, it is a pastiche of themes and incidents drawn  from numerous Hollywood westerns, all the time giving them ironic turns. Chief among them is having an anti-hero as the central character, who is game but suffers defeat after defeat. And instead of a towering John Wayne in the role, we get pint-size Dustin Hoffman.

Of course, while he looks small, he shows remarkable bravery, and enough of it to deserve the name he’s given by the chief, Little Big Man. He’s also resilient, recovering time and again to attempt yet another way to make his way in the world. But the slaughter of the Human Beings, as the Cheyenne call themselves, finally gets to him. So does the mindless murder of the likable Wild Bill.

He becomes a recluse from humanity, living as a trapper, driven finally to thoughts of suicide. But a chance encounter with the 7th Cavalry on a June day in 1876 gives him opportunity to exact the long postponed revenge against Custer, the one villain of the story. And instead of dispatching him with a weapon of his own, he simply allows the man to self-destruct, along with all the men under his command.

Wrapping up. If you know western history, the film actually honors it in a general way. There aren’t the cockeyed twists of a "historical" western like Santa Fe Trail (1940) with Jeb Stuart (Errol Flynn) and George Custer (Ronald Reagen) as West Point classmates in Kansas. Richard Mulligan’s Custer in Little Big Man all but obliterates Ronald Reagen’s sunny, wholesome portrayal of the man.

Shot in Technicolor and wide screen, the film also gets the look and feel of the West. The prairie is vast, flat, and lonesome. The streets of Deadwood are ankle-deep in mud. The massacre of the winter Indian encampment resembles the gruesome photographs taken of Wounded Knee.

Director Arthur Penn’s first feature film was another western, The Left Handed Gun (1958) with Paul Newman as Billy the Kid. Later, he returned to the West with Missouri Breaks (1976), based on a Thomas McGuane script and starring Marlon Brando and Jack Nicholson. Penn is probably best known for another period film, Bonnie and Clyde (1967).

The script was by Calder Willingham, also known for The Graduate (1967) and Thieves Like Us (1974). The screenplay was adapted from a novel by Thomas Berger. Little Big Man is currently available at netflix, and at amazon and Barnes&Noble. For more of Tuesday’s Overlooked Movies and TV, click on over to Todd Mason’s blog.
Tweet

Coming up: Cowboy names, no. 3