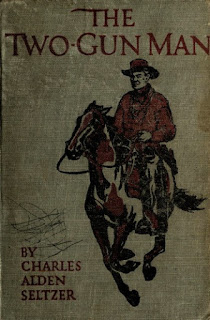 Along with Zane Grey and William MacLeod Raine, Charles Alden Seltzer is remembered today as an originator of what’s often called the formula western. In it, a cowboy hero of sterling qualities, who is fast with a gun, meets and subdues a vicious villain. While this part of the story plays out, the cowboy also wins the heart and hand of a pretty sweetheart.

The Two-Gun Man has all these elements firmly in place. The story is told with few complexities of plot or character. It is set at an unspecified time in the open ranges of the Southwest, somewhere in the neighborhood of Raton and Cimarron, New Mexico.

Plot. The central character, Ned Ferguson, arrives in a small desert settlement. He’s been sent for to find and dispose of rustlers who have been decimating the herds of a cattleman named Stafford, who runs a spread called the Two Diamond.

Ferguson comes to suspect Stafford’s range boss, Dave Leviatt. There’s been bad blood between them ever since Ferguson demonstrated his skill with a sidearm. While Leviatt shows he can shoot a tomato can five times while it’s in the air, Ferguson manages the same trick with six.

Ferguson works under cover on Stafford’s ranch, posing as a “stray-man,” hired to roam the hills and brakes in search of cattle that have wandered off from the herd. In reality, he is a range detective, with a license to kill, no questions asked. He soon finds evidence of rustling, and Leviatt and a pal Tucson seem the likely culprits.

One day, following them from the ranch, he finds the two men turning over Two Diamond cattle to another pair of rustlers. Confronting Leviatt and Tucson when they return to the ranch, Ferguson is forced to draw on the two men, killing them both. The grateful ranch owner, Stafford, makes Ferguson his new range boss.

Romance. After all that, it may come as a surprise that much of the novel is devoted to a romance that blooms between Ferguson and Mary Radford, who lives with her brother nearby. The one twist in the story is that Mary is an aspiring writer, and after meeting Ferguson, she busies herself writing a western novel.

The central characters are based as close to life as she can make them. The hero is the handsome, two-gun-wearing Ferguson, and the villain is the despicable range boss of the Two Diamond, Leviatt. As the object of his unwelcome attentions, she has reason to hold him in contempt.

Envious of Ferguson’s apparent success in wooing the girl, Leviatt misinforms her of Ferguson’s true purpose at the ranch. He’s been hired, he says, to kill her brother, Ben. When Ben is then wounded in an ambush, she assumes that Ferguson is the gunman. Feeling betrayed, she greets Ferguson with a rifle at his next visit and the promise to use it should he ever return.

Mary is his first true love, and he falls hard for her. At first he is charmed by learning that she is a writer. Then he is hurt when he believes for a while that her affections are only a pretense to learn what she can of him for her novel. When she rejects him, after misunderstanding his true intentions for wooing her, he is thrown into a truly painful melancholy.

No worries, however. Exposing the real rustlers, Ferguson quickly finds himself back in Mary’s good graces. The novel ends as she seeks Ferguson’s help with the ending of her novel. Will the lovers marry and go back East, or will they stay in the West?

They’ll stay in the West, he tells her. The cabin where the heroine and her brother have been living will be enlarged to make room for the hero, he says, and for the arrival of little heroes and heroines. Embarrassed, she stops short of putting “such a thing as that” into her book.


Character. From the first, Ferguson is described in classic western terms that seem almost a premonition of Clint Eastwood:

The man lounged in the saddle, his strong, well-knit body swaying gracefully, his eyes, shaded by the brim of his hat, narrowed with slight mockery and interest as he gazed steadily at the town that lay before him. 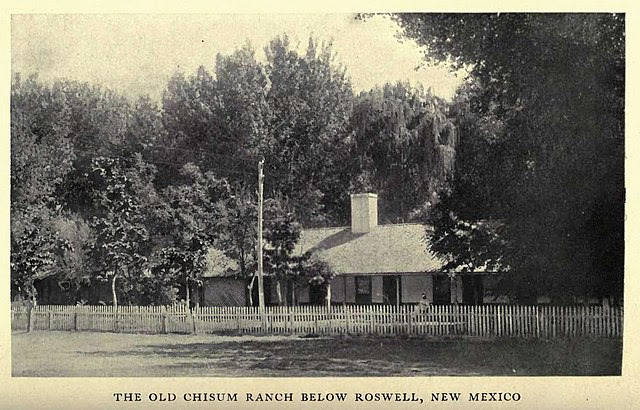 Tall, broad shouldered, and narrow waisted, he is twenty-seven years old. At first appraisal, he is taken for a gunfighter because he wears a revolver on each hip. Given to few words and lacking a display of emotions, he projects a degree of menace.

In time, however, Seltzer begins to reveal his thoughts and feelings, and we discover that he is not what he seems. In the West, where a man must show no sign of weakness, a cold, guarded reserve keeps other men respectful. Once Ferguson is alone, he relaxes and drops the façade. He even has a sense of humor.

For a man who carries two guns, Ferguson is also strongly averse to killing. He declines when Stafford gives his okay to execute any rustlers he finds. In the end, he shoots Leviatt and Tucson only because they attempt to kill him first. And he chooses not to observe the hanging of two other rustlers that he helps Stafford apprehend.

Wrapping up. Born in Wisconsin, Charles Alden Seltzer (1875-1942) was a prolific western writer, who spent much of his life in Ohio. Inspired by experience on an uncle’s ranch in northeast New Mexico during his early years, he produced more than 40 novels and scores of short stories.

From 1909 onward, Charles Alden Seltzer was a frequent contributor to Argosy and other pulp magazines. During the Silent Era, 15 of his novels and stories were adapted to film. His novel The Coming of the Law (1912) was reviewed here a while ago.

The Two-Gun Man is currently available online at google books and Internet Archive and for kindle and the nook. For more of Friday’s Forgotten Books, click on over to Patti Abbott’s blog.
Tweet

Coming up: Saturday music, The Monotones