Cyrus Townsend Brady, The West Wind: A Story of Red Men and White in Old Wyoming (1912) 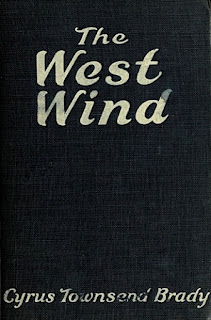 This novel is a high-pitched adventure about fighting Indians on the frontier, with the kidnapping of a white woman by a “half breed” as its starting point. Amy Benham, the West Wind of the title, is so called because she is a spirited and independent product of Wyoming’s wide-open spaces.

Saving her from a fate worse than death are two men, Army captain Joseph Kennard and the Irish foreman of her father’s ranch, Pat Sullivan. Both are head over heels in love with her. It is Wyoming in the 1870s, and her rescue is played out in the midst of an uprising of the Sioux and Cheyenne.

Plot. The kidnapping occurs in the opening chapter as Amy’s father is shot dead by Jules Girot, the “half breed,” who wants her for his “squaw.” He rides off with her as his prisoner, promising despite her protests that she will learn to love him.

At nearby Fort McCullough, cavalry troops are being marshaled to round up the Indians, who are reported to be on the warpath. When news arrives of the kidnapping, Colonel Wainwright, the commanding officer, permits Kennard and his men to follow Girot’s tracks. Sullivan goes with them.

They soon discover that he has made a perilous journey along river rapids and has been joined by a band of Indians. The trail leads into a canyon where they surprise the Indians and take a number of lives while the rest flee. But there is no trace of Amy Benham, only a pair of her slippers.

Shifting point of view, the narrative reveals that Amy has escaped captivity with the help of an Indian woman, Mah-Wissa. The two women have found a hiding place in a remote and isolated canyon. There they wait to be rescued.

Rejoining Col. Wainwright’s troops, Kennard and Sullivan accompany the regiment until it finally meets a massive force of Indian warriors. Though outnumbered, five to one, the soldiers hold their own, while Kennard’s company is sent on a flanking mission, which leads them to an Indian encampment.

Sullivan is convinced that Amy is being held there and continues onward, while Kennard and his troops turn back under orders from the Colonel, who fears an ambush. Come darkness, Sullivan sneaks into the camp but finds neither Amy nor Girot, whom he’s determined to kill. Waking the camp, Sullivan rides off on a pony, with Indians in hot pursuit.

By chance, he discovers the two women in a cave, where they are besieged by the Indians, who are in turn driven off by Kennard’s search party. Girot is taken and killed, and Sullivan dies with Amy at his side. But before Kennard can return Amy to safety, they must endure yet another days-long battle with the Indians.

Romance. The wrinkle in this story is the presence of two men seeking the hand of the same woman. Normally one would clearly be the better man. He would be more handsome, appropriately aged, and good-hearted. But Brady makes the two men equals in all these regards.

The one difference is that Kennard is socially superior, being a commissioned officer in the Army, while Sullivan is somewhat the lesser man. More than a foreman, he’s in line to become a partner in the Benham’s ranching operation, but Kennard holds the trump card. He can make Amy an officer’s wife.

For the sake of the narrative, Sullivan is a hero better off dead and buried. As long as he’s kept alive, he remains a loose end for the plot. Brady hopes that his demise, attended by the woman he’s given his life for, will compensate for that loss with another kind of romance—the romance of a noble death.

Women. Amy is a motherless girl, now 19 years old, who has grown up in the West with her father. We learn that she has only just returned from school in New England, where her schoolmates have nicknamed her “West Wind” for her lively personality. Sullivan is of the same mind:

As he came to know her he had been charmed with the girl’s splendid beauty, her frankness, her generally free and independent spirit, her girlish, graceful carriage, her keen bright mind, trained in the stimulating school of Nature.

Under duress, she has “that Anglo-Saxon temper” that prefers action to waiting quietly. After days hiding out in the cave, Brady sums her up as “a ragged, tattered worn-out but indomitable American girl.” In short, she is in most ways the conventional western heroine.

Whites and non-whites. In a novel that features in its title “red men and white,” Brady allows his Indians a degree of fearsome respect. They are savages, yes, but they also deserve due regard as fierce fighters.

Where they lose points is in their inhuman treatment of the whites they capture. The novel continually rings a toll of dread for the fate of Amy. The men grow anxious, for they know “what it meant for a white woman to fall into such hands.” For herself, Amy knows that her honor is at risk of being ruined unless she can quickly get away from “the brutality and ferocity of the red fiends.”

For Brady, the Indians rise to a level equal with whites only in their valor on the battlefield. In the final battle between Roman Nose and Kennard, he notes:

The white men were fighting with beautiful courage that quite matched the marvelous charging spirit of the Cheyennes—they were two great leaders of equal merit in that bloody feud!

There is nothing but contempt for the villain, Jules Girot, a descendant of a French coureur de bois and an Indian woman. When Kennard finds him and finishes him off by killing him with his bare hands, Brady opines, “the pure blood, as ever, was to master that which was mixed and debased.”

Wrapping up. Cyrus Townsend Brady (1861-1920) was born in Allegheny, Pennsylvania. A graduate of the U.S. Naval Academy, he was ordained as an Episcopal priest in 1890. A prolific writer, he published as many as 50 novels on western, historical, maritime, and other subjects. FictionMags Index lists more than 80 of his articles, serials, and stories.

For a churchman, Brady also had an extensive Hollywood connection, with 44 of his stories and novels adapted to film during the early Silent Era. The West Wind reached the screen in 1915. The novel is currently available online at google books and Internet Archive, and for kindle and the nook. For more of Friday’s Forgotten Books, click on over to Patti Abbott’s blog.