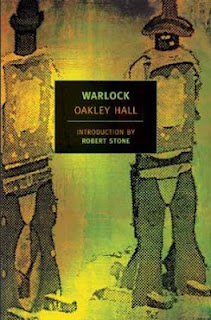 This long western novel is like all the seasons of Deadwood and Gunsmoke rolled into one. With a vast cast of characters, the narrative covers all of nine or ten months in the life of a frontier town. And it rolls on and on like it could keep going indefinitely. As one of the characters observes, “Nothing ever ended anyway.”

Which is pretty much the argument of the novel. We’re used to a sense of finality with the conclusions of western novels. The villains are eliminated by a heroic wielder of justice, while the hero wins the heart of a pretty girl, and law and order are once and for all restored. Life as we know it is not like that. It is more like a TV series with its crises and cliffhangers, characters coming and going, the solving of one problem invariably causing more problems, and so on.

Plot. Warlock is the name of a hot, dusty town much like Tombstone, not far from the Mexican border. There are silver mines in the surrounding mountains and cattle on the ranges. As the story begins, the year is 1880. A gang of Cowboys (always with a capital C) rules the town. When not threatening law-abiding citizens with their drunken revelry and either killing or running the deputy sheriff out of town, they rustle cattle from Mexico.

A Citizens Committee is organized to hire a gunman as town marshal, and thus sets in motion a series of incidents that results in several shooting deaths and the burning of two saloons. The gunman, Blaisdell, brings with him some history in the form of an old friend, a gambler named Morgan, and a woman, Kate Dollar, a sometime prostitute with revenge on her mind.

The Committee gives Blaisdell the names of the troublemakers, all of them Cowboys who work for a villainous rancher, McQuown. These men are “posted,” and it’s Blaisdell’s job to keep them out of town, killing them if they refuse to stay out. Red-blooded men, they are not easily intimidated, and they are soon in town looking to eliminate Blaisdell one way or another.

Another character also represents the law, Deputy Sheriff Gannon. He had once run with the Cowboys but left them to go straight. Allegiance to his new calling is put to the test when his brother Billy is killed during an OK-Corral-style shootout between the marshal and the Cowboys.

Meanwhile, trouble is brewing among the miners. Working conditions for them are hazardous, producing a steady flow of injuries that fill a charity ward run by a young woman, Jessie Marlow. Something of an angel of mercy, she is loved by the town doctor, Wagner, but she falls instead for Blaisdell, who moves in with her.

When the mining boss cuts the miners’ pay, they go on strike, and Doc Wagner attempts to organize them into a union. These efforts eventually bring in the cavalry to “restore order.” Blaisdell has a fall from grace, and it’s Gannon’s job to see that he leaves town or faces arrest, which finds the two men at opposite ends of the inevitable gun duel.

Themes and ideas. On the various threads of that plot rests a vividly created portrayal of a frontier community, for Warlock itself is the main character of the novel. Its pages just about overflow with characters and incidents. You are left feeling like you’ve been transported into the past. The black-and-white world of western myth dissolves into shifting shades of gray and muted color. You understand how the difference between good guys and bad guys was then (as it is now) always a matter of opinion.

Fifty years ago, readers may have thought of this novel as an “anti-western” because of its attempt to demythologize the West. Given the evolution of the genre, it shows a good many links with the traditional western. The job of living and dying as an honorable man is still there at the center of its story. The man we most come to admire is a “working stiff” with the courage to face almost certain death in performing the duties that go with the badge he wears.

Where the novel shifts into a different territory, it dwells on the corrosive effect of gun violence. When the Citizens Committee settles on hiring a gunman to protect their interests, they don’t know the Pandora’s Box they have opened. Before long, they are in disagreement about handing over lethal authority to a single man left to use his own judgment about how to administer it. For his part, Blaisdell dislikes how his role evolves into that of a public executioner.

The general opinion of the town is subject to wild rumors and easily swayed in its sympathies. Blaisdell is first praised then disliked. A villain while alive, one of the Cowboys is remembered fondly after his death in a gun duel. Blaisdell laments that there is never any finality in the execution of justice. If he kills a man, he makes an enemy of the man’s brother. He can’t do what people want. His actions are either “all the way wrong or not right enough.”

One of the town’s merchants, Henry Goodpasture, regards Blaisdell as “a good man, a fair, temperate, and reasonable man, a decent man and an honorable one.” But in the end, of course, he must die because he’s a killer, thus dangerous, and in the eyes of the public a “badman.”

Goodpasture himself is surprised by the absence of catharsis when one of the Cowboys is killed. Instead he feels revulsion. In his journal he writes: “The earth is an ugly place, senseless, brutal, cruel, and ruthlessly bent only upon the destruction of men’s souls.” In the end, the trail of bloodshed leads him to despair.

Structure. The novel is told from many points of view, including that of very minor characters and even one of the Cowboys. A contrarian perspective on the town’s affairs is provided by a one-legged, self-styled “judge” named Holloway, an alcoholic who remains often the sole voice of reason.

Many chapters come from the journal of Henry Goodpasture, who provides a thoughtful take on events as they unfold. There are so many things going on in the novel, that it is hard to anticipate what will happen next. Often there are surprising turns of events, which we may learn of second hand and after the fact.

A curious aspect of the novel is the way it reflects stories we already know of the Old West. There is a notable resemblance between Blaisdell and Wyatt Earp. Morgan, a Southerner, brings Doc Holliday to mind. There’s a similar parallel between Kate Dollar and Big Nose Kate Elder.

McQuown and his Cowboys are doubles for the Clanton gang, and young Billy Gannon recalls Billy the Kid, especially as he is remembered in death. There is even a “gunfight at the Acme Corral.” The result is to jam up fiction against both history and myth, and you get a hall of mirrors effect that is unsettling in the dream-like way the story unfolds. 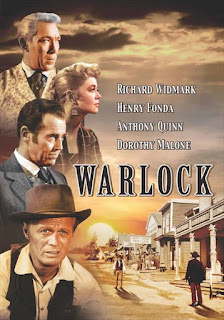 Wrapping up. Born and educated in California, Oakley Hall (1920-2008) was a graduate of the Iowa Writers’ Workshop. He taught for a time as a writer in residence at the University of California, Irvine. Warlock was a finalist for a Pulitzer when it was published. In 1959 it was made into a film of the same name starring Henry Fonda, Anthony Quinn, Richard Widmark, and Dorothy Malone (reviewed here a while ago).

Warlock became the first volume of a trilogy, which continued with The Bad Lands (1978) and Apaches (1986). Over fifty years old, the novel is still fresh as though newly minted. A thinking person’s western, it gets well under the surface of the myths by immersing the reader in a time and place where real-life people enlist lethal force in the struggle against lawlessness. It is a classic that illuminates just about every other western that’s ever been written.

Warlock is currently available at amazon, Barnes&Noble, and AbeBooks. For more of Friday’s Forgotten Books, head on over to Patti Abbott’s blog.
Tweet