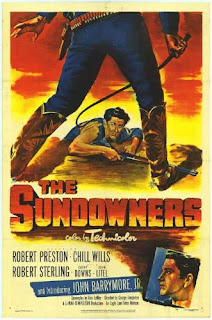 Not to be confused with last week’s The Sundowners (1960), this is an actual western about a range war in the Texas Panhandle. And as a western, it is something of a puzzle. There’s no easy telling the good guys from the villains. Three brothers, the Clouds, occupy the main plot of the story, Tom (Robert Sterling), James (Robert Preston), and Jeff (John Barrymore, Jr.). They each take a turn at being less than admirable.

Plot. Jim Cloud and his young brother, Jeff, have muscled their way onto a range that has been long ruled by a tough old-time rancher, John Gall (John Litel). The Clouds’ cattle are being run off by rustlers, and in the opening scene they find one of their hands knifed to death. Gall has installed his son as sheriff (Don Haggerty), and he’s no friend of the Clouds either.

Fortunes turn as Preston, alias “Kid Wichita,” shows up with three of his gang. Bringing some rough justice to the range, they start shooting up the rustlers. Then they take to doing some rustling of their own. A neighbor (Chill Wills) tries with good intentions to intervene, but to no avail.

Sterling does not object, even when Preston cold-bloodedly shoots the sheriff in his own office. What does begin to trouble him, however, is that young Barrymore joins Preston’s gang on their night raids. He takes to wearing a gun and mimicking Preston’s mannerisms.

Gall, pinning on his dead son’s badge, enlists some regulators of his own and asks Sterling for his help in restoring some order. But Sterling makes clear that he only intends to look out for himself. It’s finally gang against gang, and in a running battle over canyon cliffs and boulders, the Clouds prevail.

A side plot involves a ranch couple (Jack Elam and Cathy Downs). The older Cloud brothers have a way of dropping in and getting over-familiar with the wife. Preston has real boundary issues, pressing up behind her while she’s got her hands in bread dough. Sterling is more respectful, and the kiss she gladly gives him makes clear which brother she prefers.

Elam plays a weak man, unable to prevent these home invasions. Taunted by Preston into going for his rifle, he is shot dead for his troubles. In the end, the brothers fall out over this killing, Sterling intent on turning Preston in to face murder charges. This precipitates an exchange of gunfire, after which Kid Wichita dies gamely in Sterling’s arms, while Barrymore breaks into tears.

B to B+. In various ways, the movie sets the western on its ear. It takes the standard elements of the B-western and then gives them a sharp twist. Sterling is up against a mean rancher used to having his way, but the rancher earns our respect once he puts on a badge and sets to cleaning up the range. And Sterling begins looking not so likable as he lets his brother do his dirty work.

While Preston comes to Sterling’s rescue, he is not a good bad man, just a mean, heartless killer. Downs is far from being the brave heroine she would otherwise be, for she’s unfaithful to her husband with not one but two other men. Only Chill Wills remains a moral center in the film, the wise friend trying to keep Sterling from getting deeper into trouble.

Preston gives his patented performance as a blustery blowhard, whose malice is masked by a false friendliness. We see him do the same as the train-wreck looter in Whispering Smith (1948), reviewed here a while ago. His death at the end may be mourned by his brothers, but the viewer may be glad to see the last of him. Dominating his many scenes, as he does, the bluster begins to wear thin. He also has a way of breaking into song, a self-serving ballad, "O'Reilly," which grates after a while.

Usually cast as a villain, Elam plays a decent man who has every right to be left alone. You understand his stifled rage at being bullied by Preston. More damaged goods than traditional heroine, Downs is absent from the final tableau. She’s been packing to leave the range in the final scenes and by now may well be on the stage back to wherever she came from.

Shot in Technicolor on location in the Texas Panhandle, the film has a sharply focused, realistic look. The exteriors are handsome, and the modest cabins used as ranch houses lack the just-built appearance of Hollywood sets. The long sequence devoted to the shootout in the canyon is dramatically photographed as it plays out against the warmly lighted lines and curves of eroded rock.

Wrapping up. A “sundowner” is a tramp who arrives at sundown in time for a free meal. In the film the term gets used as an insulting reference to Jim Cloud, maybe because the Clouds came late to settling the range, where they are not welcome.

The screenplay was written by Alan LeMay (1899-1964), based on his novel Thunder in the Dust, serialized in Collier’s (1933-34).  LeMay produced numerous novels and short fiction over much of four decades, including some 15 screenplays. He is remembered today for his novels The Searchers (1954) and The Unforgiven (1957), both made into classic films.

The Sundowners is currently available online at youtube, at netflix, and at amazon and Barnes&Noble. For more of Tuesday’s Overlooked Movies and TV, click on over to Todd Mason’s blog.
Tweet