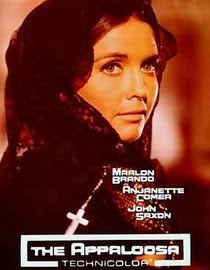 Marlon Brando, for some reason, has never seemed an easy fit in western movies for me. His face and his voice are so deeply grounded in On the Waterfront, Guys and Dolls and, later, The Godfather. He seems to have wandered far from home when he shows up on the frontier, as he does here.

Whether it is he or a double in the opening shots, riding across the vast western landscape, it looks like someone who has never been on a horse before. Muttering his lines as he stops by a church for a confession in an early scene, he seems to be trying on a character that is beneath his range as an actor.

Donning a huge brimmed sombrero and serape to recover an Appaloosa stolen from him by John Saxon in the first reel, he begins to bristle with menace. It’s almost like watching the Hulk pop out of Bruce Banner’s shirt. His steely determination is pitted against the grinning arrogance of Saxon and his pistoleros. While Saxon’s grin is malicious, Brando’s is blood curdling. For all that, he’s still not a character this side of villainy we expect to find in a western.

Plot. The plot of the film is simple, almost like a fable or folk tale. Diffident and soft-spoken, Brando returns from “the war” where he killed men and “sinned” with women. Saxon wants to buy his horse for a girlfriend (Annjanette Comer). When Brando refuses to sell, Saxon steals it and heads into Mexico. Brando follows and is taken prisoner by Saxon. In a suspenseful scene the two arm wrestle for the horse, the loser to be stung by a deadly scorpion.

Comer helps Brando flee with his horse, eager herself to escape the clutches of Saxon, who follows them into the mountains and attempts an ambush. Brando, exhibiting his skill with a rifle, puts an end to Saxon on the snowy mountain slopes and returns to the U.S. side of the border. A friendly Mexican family waits there to welcome him back.

Three stars. The widescreen cinematography of the title sequence is almost breathtaking. We see the desert Southwest and a small lone figure riding horseback across the terrain. Camera work in the rest of the film, however, gets to be awkwardly self-conscious. Almost invariably there is someone or something between the camera and the action, sometimes nearly filling the screen. At times the film seems more style than content.

Anjanette Comer, whose work has been chiefly for TV, is a lovely presence on screen, but director Sidney J. Furie has her rarely do much. Her sad pretty face and watching eyes are always a grace note among the company of men around her, often leering and dead ugly. Yet one senses little chemistry between her and Brando, and maybe that was the intention.

A strange movie and a strange performance by Brando. The film was shot in Technicolor and Techniscope, with location photography in St. George, Utah. The Appaloosa is currently available at netflix and in a 4-film set at amazon and Barnes&Noble. For more of Tuesday’s Overlooked Movies and TV, drift on over to Todd Mason’s blog, Sweet Freedom.