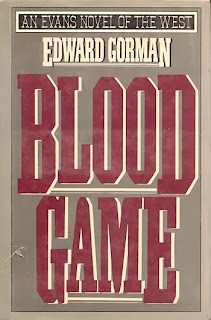 This hard-boiled "midwestern" is set in the summer of 1892 in some unnamed city big enough to turn out over 4,000 fans for a nasty boxing match. The focal character is Leo Guild, a 55-year-old bounty hunter convinced by a boxing promoter to help stage a fight between a white man and a black man. A bloodthirsty crowd is expected, believing they’ll be witness to a killing in the ring—and not the killing of the white fighter.

It’s an ugly set-up, and Guild has seen enough of the world to know it’s not much different from what passes for everyday human behavior anywhere. Stoddard, the promoter, is a tyrannical blowhard, loved only by a loyal son, Stephen, whom he abuses and scorns.

The white fighter, Victor Sovich, is equally hateful. Given to insane rages, he abuses women and boasts that he likes to kill people. One young fighter died during a bout after Sovich poisoned him to slow him down in the ring. His opponent in the upcoming match is a Franklin Rooney, a man past his prime whose only aim is to survive the fight. The longer he can stay upright, the more he gets paid. He only half understands that the crowd has gathered to see him die.

Guild meets a pistol-packing mama, Clarise Watson, intent on avenging Sovich for the poisoning of her brother. Guild, unconcerned by their difference of color, maneuvers to keep her out of harm’s way. Also keeping her company with hotel breakfasts and after dark walks, he discovers her to be a consenting adult.

Stoddard hires Guild to guard the day’s take during the fight. He has promised Sovich to split it with him, but hires a thief to conveniently steal it. Sovich will get nothing, and Guild is intended for a bullet during the robbery. By mid-novel, death is in the cards for several characters, and however it plays, you know it will all end in tears. Which it literally does.

Guild is an interesting invention. He’s both tough and scarred, haunted by the death of a “little girl” in his past. It is a memory that will not let go of him. Whiskey and sex provide temporary relief. For the rest of the time, life is a matter of simply not giving in, and relying on his .44 as needed.

The novel reads like a 15-round fight, each chapter a sharp jab or a punch. Gorman’s point of view shifts among more than a half-dozen characters. And there are curious details, like the women carrying placards in the street protesting the sport. A referee describes the gruesome extremes beyond which he will not let a fight continue. A Mexican woman’s mother scolds her for leaving her children to follow a man who will discard her when he’s tired of her.

Blood Game is currently available in paper and audio formats at amazon, Barnes&Noble, and AbeBooks. For more of Friday’s Forgotten Books, click on over to Patti Abbot’s blog.
Tweet