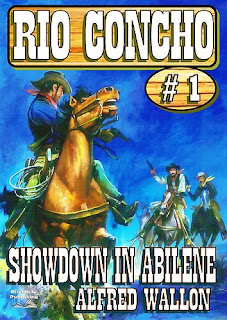 Originally published in 1981—in German—Showdown in Abilene was the first novella in Alfred Wallon’s Rio Concho series. Published now for the first time in English by Piccadilly Publishing, it’s in many ways a love letter to the American West.

Plot. With an abbreviated story that could well fit neatly into a one-hour TV western episode, Wallon introduces readers to a trail boss, Jay Durango, and his crew of cowboys. They have just arrived in Abilene, Kansas, after a summer-long cattle drive from Texas.

Encouraged to have a good time in town by the marshal, Bear River Tom Smith, but to stay out of trouble, the cowboys make an attempt to comply. But under the influence of too much alcohol, they cause a disturbance at the Opera House. Before long, they’re cooling off in jail.

More serious trouble is in store for Jay Durango. A pair of villains abduct him and hope to leave him dead in a shadowy corner of the red light district. Arson figures in to further plans for a bank robbery while a section of town burns. Bullets finally fly proving once again that crime rarely pays.

Pleasures of the text. There are many things to enjoy about the story and the storytelling. In Wallon’s hands a reader senses the pleasure of spinning a yarn from the familiar elements of the material. His characters are not only full of life. They are sketched in with hints of backstory that make you curious about them.

Durango, for instance, has what seem to be troubled memories of soldiering for the Confederacy. Returning to Texas, he’s in hopes of a new beginning. Billy Calhoun, the young son of the rancher he works for, was for two years abducted by Quanah Parker’s Comanches. He rankles at Durango’s attempts to supervise him. There’s even brief reference to a black cowboy, Bob Rennington.

Wallon also enjoys blending fiction and western history, and he stops his narrative at times to talk about the Old West. Readers learn of the early days of the railroad town, Abilene, and there’s an account of how longhorns were introduced to the New World. We also learn that several characters, including the marshal Bear River Tom Smith, are taken from history.

For English-language readers, the first two Rio Concho novellas, Showdown in Abilene and Gunfighter’s Legacy are now available in translation, with more on the way. They can be found in ebook formats at amazon and Barnes&Noble. Visit Alfred Wallon’s website here, where you can read his bio and discover more about his many German-language books.
Tweet

Alfred Wallon has generously agreed to spend some time at BITS today to talk about writing and his western novels. I’m pleased to turn the rest of this page over to him.

Alfred, to what extent is your style of storytelling influenced by TV or movie westerns?
I guess I was influenced very much by movies. My favorite TV series was "The High Chaparral". While I was watching the TV episodes in the early 70s here in Germany, I already thought about a historical ranch western series. Some characters of this TV series helped to create my Rio Concho series.

Do you think your western stories owe anything to Karl May?
Not at all. I am one of the German western readers who never liked Karl May’s way of storytelling. Of course I grew up with his stories when I was a youngster, but I found out very quick, that most of these novels were just fairy tales. I was always a fan of the classic American novels like Will Henry, Gordon D. Shirrefs, Terry C. Johnston, Jory Sherman and of course William W. Johnstone.

How long is the original Rio Concho series?
The original series has 28 short novellas.

What made you choose the short form of the novella?
They have been published in that size, because the German market required such a length at that time when they were published first in the early 80s.

Were you thinking of any other writers while you were writing the series?
No. While I am writing and planning a novel, I am creating my own world. After I have completed my historical researches, I am developing a storyline, and then I am beginning to write.

How did you go about deciding on the series title?
I just thought it would be a good title for a series, because some of the characters are located in Texas.

What have been the most interesting reactions of your readers?
I guess they like the great variety of the series. Due to the characters of the series (a historical and epic family saga) I can tell and show nearly everything, which is interesting. And there are still many chapters of the early pioneer history which need to be told...

Talk a bit about your writing process.
Well, I guess I am quite old fashioned as far as the writing process is concerned. No music, no noises at all. Anything which comes from outside destroys my working. So you’d best imagine me, sitting in my office before a book shelf, typing a story into my computer.

The most important thing is that I construct the story plot from the beginning. I write a summary of everything what will happen in the book, and after this is finished I begin to tell the story - without any changes. And after the day’s work is done, well then I listen to some country music records or watch a good western...and of course I love to read. I read every day, mostly American westerns in English language.

Writing in German, do you try to simulate cowboy vernacular as it’s used in English-language westerns?
Sometimes I try, but it’s not easy to find a similar and suitable German word.

For Piccadilly, you have done some of your own translating. Talk a bit about what that’s like.
That was something special, because I am no native speaker. I did the best I could. With the help of David Whitehead, one of the Piccadilly Publishing editors—and a personal friend of mine—everything got a final polishing at the end, and after that it was just very good.

Over 30 years have passed since the first Rio Concho story. Would you write that story any differently today?
I wrote my first Rio Concho novel in 1980, and my writing style was quite different in comparison with today. So I tried to change a few descriptions and conversations in the story while I translated it into English. So you might say that the translated novels are quite better than the original script.

Who besides yourself are writing westerns in German today?
The German western market has changed dramatically since 1990. Most of the publishers refuse to publish westerns, because they think that they would not sell. There are still a few who continue writing, guys like Thomas Jeier, Werner J.Egli or Dietmar Kuegler. But more than 95% of the western novels here in Germany are re-issues of older novels. So I guess, I seem to be the last of the breed in a special way over here in Germany. At least what new book projects are concerned.

What are you reading now?
Just right now I am reading a Cutler novel by John Benteen. He was a great writer.

What can your readers expect from you next?
I have just finished a novel about Liver-Eating Johnston. The next book will be about General Stonewall Jackson’s last days. I have finished the translation of my third Rio Concho novel Kiowa Rebellion, and I hope that I can do the translation of the fourth book in this series too next spring.

Anything we didn’t cover you’d like to comment on?
I just want to say thanks for giving me this opportunity to talk about my work.

Thanks, Alfred. Every success.