Trails of the Wild 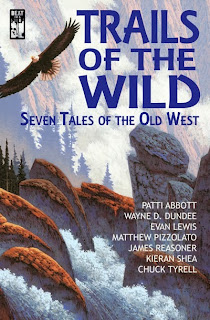 This collection of western stories from David Cranmer’s Beat to a Pulp imprint is a welcome addition of new short fiction to the genre. As followers of his online zine already know, Cranmer has a fine eye and ear for picking writers with a gift for storytelling.

Beat to a Pulp readers will find some familiar names here. For sheer volume of output and award winning, that list would be led by James Reasoner and quickly followed by Patti Abbott, Chuck Tyrell, Wayne D. Dundee, Kieran Shea, and Evan Lewis. They are joined by the notable talents of relative newcomer Matt Pizzolato.

Patti Abbott deserves mention first for not only representing her gender in a genre that has long thought of itself as rightly dominated by male writers—and second for venturing into western territory from her usual fictional domains, which I always think of as being situated somewhere in or near Detroit. (I’m sure someone will correct me if I’m wrong about that.) Her offering here, “The True Story of Boy Kaleen,” is an entertaining tour de force of Old West vernacular.

James Reasoner’s “Rattler” works a tight situation between two men with guns and a rattlesnake with opinions of its own. For someone with a snake phobia, the story has probably the surest opening for grabbing attention: “Cobb had been holed up in the rock for about an hour when the big, diamondback rattler crawled over the back of his legs.”

Well into the spirit of western realist noir, you’ll find the expert hand of Kieran Shea. His story “A Decent Man” is a grimly melancholy account of a man attempting vainly to repay another man’s wrong. Matthew Pizzolato’s gunslinger Wesley Quaid is more successful as he confronts some bullies in “Day of Reckoning.”

That leaves the long story, “The Empty Badge,” by Wayne D. Dundee, who brings us another tale of the outlaw marshal, Cash Laramie. This one, set on the high plains borderland of Nebraska and Wyoming involves a traveling medicine show, a case of amnesia, bank robbers, and a Cash Laramie impersonator.

Together, I can say from firsthand experience, the stories collected in Trails of the Wild make for great bedtime reading. They are currently available in ebook format for kindle and the nook.
Tweet